List: The best science fiction series summarized as a DVD box for you 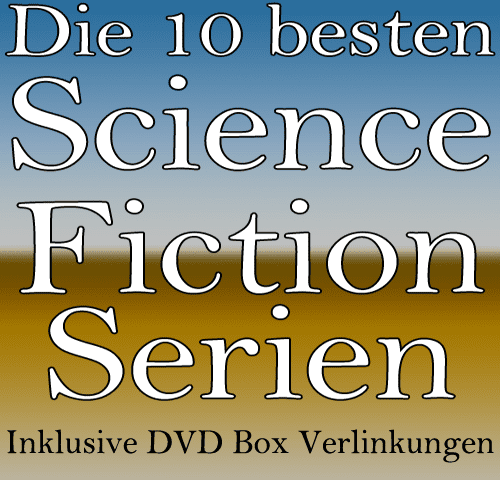 The science and imagination of filmmakers and series makers; these two types of human preoccupation with the laws of nature and their application have been fruitful for many decades. The Science fiction genre in moving images has also developed from the corresponding literary genre with Jules Verne as one of the best-known representatives. But that's a whole different story. This is now about the ten best science fiction series. (I have linked the corresponding DVD boxes to you; because Christmas will be again in two months;))

Star Trek, Firefly, Doctor Who, Battlestar Galactica, Stargate, Orphan Black, The X Files and more - this list shows the best science fiction series. (Or not? Then leave a comment!)

Star Trek is probably the most famous and popular Science fiction series counting. With the production of the original series in the 1960s and the series based on it in the 1970s, 80s, 90s and into the 2000s, the franchise has won many fans in different generations.

Firefly - The Dawn of Serenity

In the original this series is simply called Firefly. It comes with just 14 episodes that were originally broadcast between 2002 and 2003; after that there was also a film about the series in 2005. Also referred to by some as a “Space Western”, the series is about a transport ship crew who run various errands in space and encounter different conditions - sometimes unfriendly to life. (Who still thinks of Futurama here? ;-))

Futurama - the Simpsons of the future

In the first episode, the pizza delivery boy Fry accidentally gets into a time capsule that freezes him for 1.000 years. He wakes up in the future where, in addition to a robot who could be a cross between Bart Simpson and Krusty the Clown, he encounters a rebellious Cyclops and other quirky characters (as well as a distant relative who is a professor). The resulting adventures - also with the merchant ship of the thrown together crew - can be marveled at in seven seasons.

The original Doctor Who series was produced by the BBC between 1963 and 1989. The renewed hype about the doctor, the TARDIS and everything else that has to do with the Who universe was triggered by the new edition of the series, which has been produced since 2005. Since then - and currently already in the twelfth line-up - the doctor has been traveling through space and time again, which brings him many adventures.

In this Sci-Fi series the journey of the protagonists does not start from the earth, but should lead them exactly there. After the destruction of large parts of the "cybernetic race" by the "Cylons", the remaining members of this culture gather in and around the remaining military ship, the "Battlestar Galactica". Here, too, there was a successful new edition of the original series from the 1970s, which was broadcast from 2004 to 2009.

Stargate was initially a film from 1994. Due to its success, a series that took over the plot called "Stargate - Kommando SG-1" was later created. This not only led to several seasons of the main production (1997 to 2007), but also to spin-off series such as Stargate Atlantis, Stargate Universe and so on. There were also other films. A return of the franchise is not impossible.

After a pilot film that was quite successful with US audiences, after about a year there was the first of five seasons of this series, which was produced from 1993 to 1998 and also led to a few spin-offs, films and a comic of the same name Has. The time frame defined in the series spans the years from 2257 to 2262.

This is a series about the protagonist Sarah Manning that has been in production since 2013 and is still in production. These and other roles are played here by Tatiana Maslany. Because the protagonist is only one of several clones, who is increasingly discovering a kind of conspiracy that leaves her in doubt about everything that she has previously perceived to be truth. A kind of multiverse in a small space. Exciting!

The series Eureka, set on earth and without any further influence from other, extraterrestrial cultures or civilizations, is, as the German title already describes, about a secret city in which - financed by the US government - scientists can rule as they see fit. And that since the end of the Second World War. The series produced between 2006 and 2012 shows Sheriff Jack Carter how he copes with the individual inventions and the problems that arise with them.

The X-Files - The FBI's Creepy Cases

This cult series also takes place on earth, but with the influence of extraterrestrial life or the corresponding technology. It was produced between 1993 and 2002 and reissued this year. FBI agents Fox Mulder and Dana Scully investigate episode by episode mysterious cases that also reveal links with politics. Of course, the myth about Area 51 is not missing here either.

Do you still have your own favorite sci-fi series? Is something missing from my small top 10 list or do you disagree with one of the entries? Let me know in the comments!