If you're already a little bit with the HDMI standard the term "Wireless HDMI" is probably already familiar to you. In this article I would like to explain for you what the great thing about Wireless HDMI is and what you should look out for when buying - after all, we all want to enjoy this great feature for a long time without having to spend money a second time, don't we? 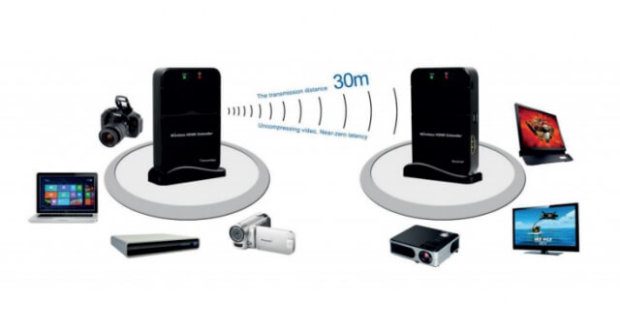 This graphic from Celexon shows how an HDMI signal can be transmitted wirelessly by radio. Incidentally, the Celexon radio set is also my recommendation for transmission within a room (look here at Amazon).

The characteristics of wireless HDMI

So what is it like? Is it really that easy to transmit an HDMI signal without a cable by simply inserting a stick into the desired end device? Yes indeed. But not all wireless HDMI are the same - there are basically two different technologies. On the one hand, there are the 5GHz systems (which also include the Microsoft Wireless Display Adapter belongs) and on the other hand the 60GHz technology.

Both HDMI wireless versions offer different advantages: While most 5GHz devices can also transmit a signal through walls, 60GHz technology has the advantage that it transmits the image and audio signal particularly reliably, which is not possible with all models can claim with 5GHz.

Most devices are not only compatible with smartphones, but also tablets and home computers (Windows / MacOS), regardless of the technology installed. If you are unsure, just have a look at the respective product data sheet.

What you should consider when buying

If you have decided on wireless HDMI, then there are key data that you should not lose sight of under any circumstances - the most important thing is of course that the wireless HDMI device can also be used with your computer or smartphone, even if most of them Models as already described are compatible with almost all common operating systems.

But the resolution also plays a major role - even if the image quality was quite poor a few years ago, new standards such as 4K @ 60Hz have become established today. If you want to play video files in this resolution, the wireless HDMI device must of course also be able to do so - the choice of this resolution is of course optional and as you probably already know, good technology costs its price.

Attention: If you want to use streaming offers with wireless HDMI, I have to disappoint you: So far I have hardly found a device that supports Netflix, SkyGo or Amazon Instant Video, for example.

As you can see from this article, Wireless HDMI is not only a practical way to, for example, view pictures or videos from your smartphone on a TV or projector - if you don't want to buy twice, you have to pay attention to a few points. I hope you enjoyed my post: leave your feedback in the comments!

My recommendations for certain purposes

To make shopping a little easier for you, I have three recommendations that were also recommended by a major technology newspaper.

The radio set offers the best quality transmission WHD30M from Celexonthat works at 60 GHz. It can definitely only be used if all devices are placed in the same room. However, the advantages are that the latency is very low and the signal is very stable.

If, on the other hand, you want to place the transmitter and receiver in different rooms, then 5GHz technology is the right choice. However, even with good devices, this always shows picture disturbances. If you can get used to it, then the following radio sets are my purchase recommendation. If not, you should rather use an HDMI extension, an HDMI repeater or a long HDMI cable to bridge the distance.

The selection of the 5GHz devices would be that One for All SV1760 and I baked the Oelbach Falcon Funk Set.