The SanDisk SD cards have been my favorite choice for many years when I have to buy a new memory card for a drone, digital camera, 360 degree camera or action cam.

Why SanDisk? Because I haven't had a single SanDisk card fail in over a decade. An acquaintance who offers aerial photography with a drone had to find out after an order that almost all the photos on his no-namememory card were unreadable. This is not only embarrassing because you have to talk to the customer again to make an appointment, but also expensive because you end up investing the same amount of time twice at the end of the job. So it's definitely worth getting one buy high quality microSD memory card.

The SanDisk Ultra is not recommended for 4K video, as the writing speed may not be sufficient to save the video data quickly enough (Photo: Sir Apfelot).

Not suitable for 4K video!

If you still use the SanDisk Ultra, frame drops may occur when the video is saved, which would appear as brief jerks in the finished video. This may make the recordings unusable.

The selection and prices of SD cards fluctuate almost daily on Amazon. For this reason I have included the current bestsellers from SanDisk with 64GB capacity here. Whether you choose the Ultra, Extreme or Extreme Pro is up to you. However, I recently started getting the Extreme Pro to have as little waiting time as possible when reading the data from the memory card.

When you think about the capacity of the memory card, it depends above all on the areas of application for which you want to use the card. The common sizes for memory cards are currently 64GB, 128GB, 256GB and even 512GB. The 64GB memory cards often have the best price-performance ratio, but are not always the best choice if you look at the requirements in practice.

How many photos fit on 64GB?

In order to be able to better assess whether you have enough storage space with a 64GB memory card or rather one 128GB card should take, it often helps if you have values ​​to compare. For this reason, I am giving a few rough examples that reveal how many photos or minutes of 4K video can be saved on a 64GB memory card. 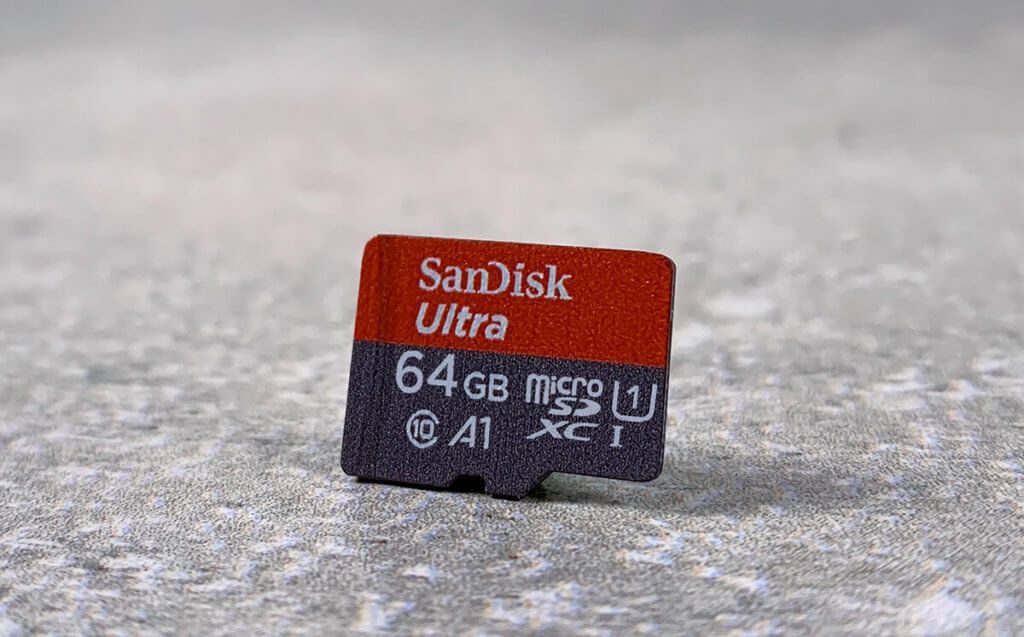 Photo: The SanDisk Ultra 64GB microSD card with the marking for the speed classes Speed ​​Class 10 and UHS U1 (Photo: Sir Apfelot).

There are some models of the SanDisk Ultra memory cards, such as those with 200 or 400 GB, that do not have a minimum write speed rating. The reason for this is that they are used as memory expansion for smartphones and that a permanently high writing speed is not important. 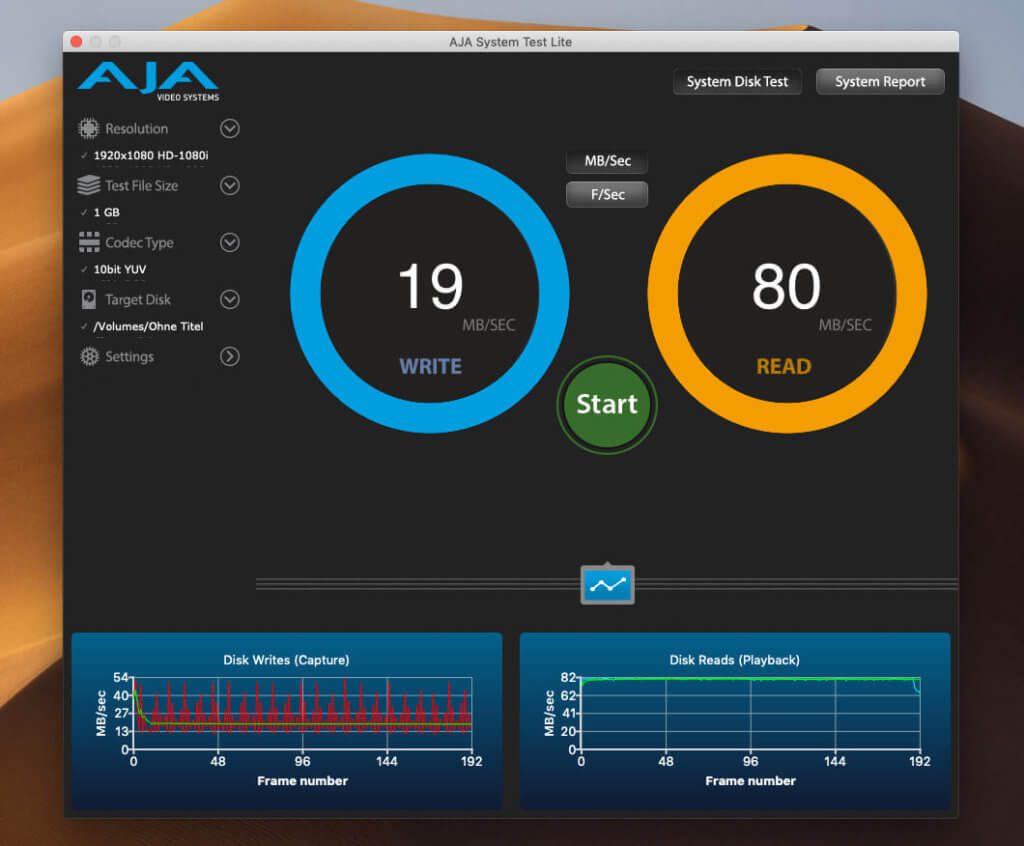 For these speed classes, the memory card must be able to write data continuously over a longer period of time at at least 10 megabytes per second without falling below this value. In tests by customers on Amazon, the card achieved around 78 MB / s reading and 21 MB / s writing. So it was well above the required 10 MB / s.

I have the read and write speed myself with the tool Aja system test tried it out and got 3 MB / s for writing and 19 MB / s for reading via a USB 80 card reader with USB-C adapter on my MacBook Pro.

In the detailed graphic, which shows the chronological progression of the write speed of the SanDisk Ultra, you can see that it periodically slows down while writing, but only drops below 13 MB / s. However, the limit for the Class 10 and U1 ratings was 10 MB / s, which the SanDisk Ultra 64GB easily manages. 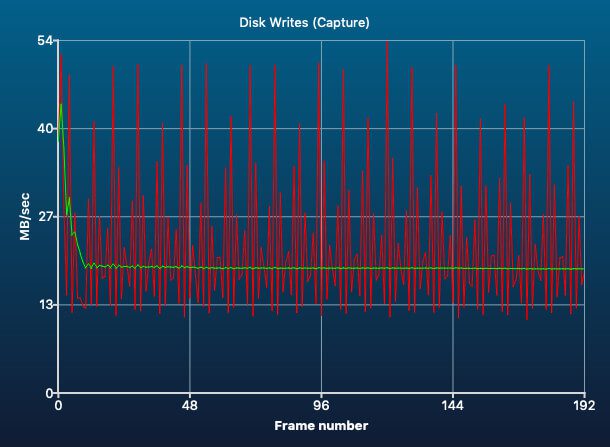 The writing speed of my SanDisk Ultra periodically dropped to its knees, but never fell below the important value of 10 MB / s.

The A1 or A2 classificationthat you may find on this card is only of interest for use in smartphones and has no relevance for photography or recording videos. 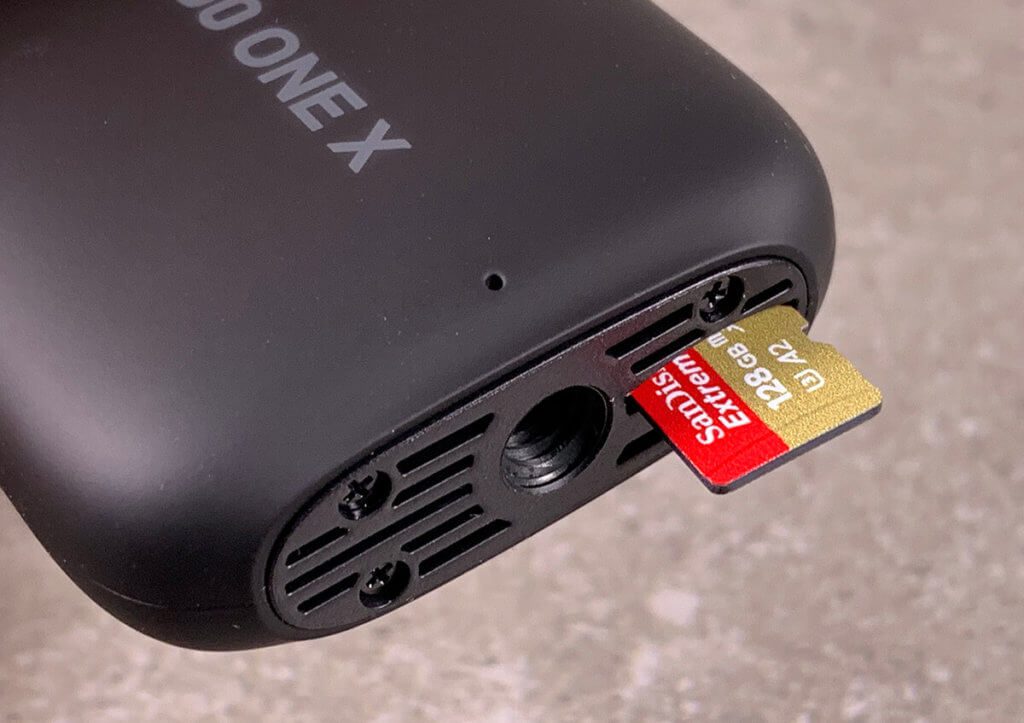 With the Insta360 One X, the SD card is inserted into a slot at the bottom (Photo: Sir Apfelot).

Recommendation: Better to use SanDisk Extreme 360GB for 128-degree videos

I have an Insta One X 360 degree camera that records videos at 5,7K and 30 frames per second. The bit rate is not very high, but since you only get just over an hour of recording time with a SanDisk Ultra 64GB SD card, it is safer to grab 128GB straight away.

The Insta One X's battery also lasts about an hour, but I always leave old recordings on the memory card as a backup. With a capacity of 64GB, I would always have to empty the card after use so that an error message about insufficient capacity does not occur during recording.

And especially important: Since the camera records videos with a resolution of 5,7K, the SanDisk Ultra is unfortunately not sufficient as it does not offer the appropriate writing speed. For this reason I also use a SanDisk Extreme (visible in the photo) with 360GB for the Insta One X 128.

Other posts that I can recommend to you: