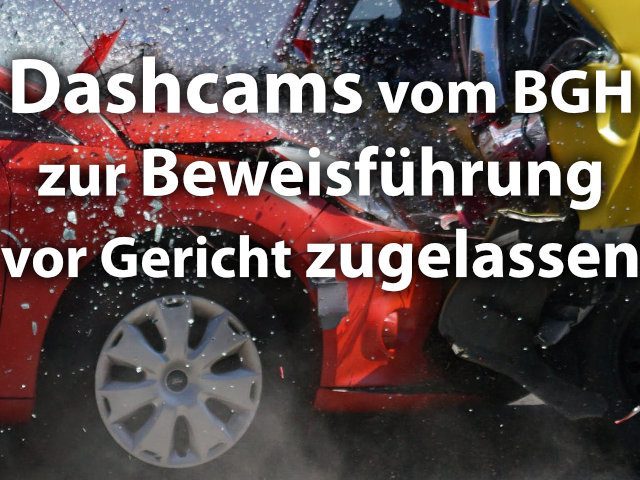 Yesterday the Federal Court of Justice ruled that the recordings of a dashcam during the negotiation of an accident in court are admissible as evidence. It is true that the mini cameras for the windshield are not yet completely legal in Germany; however, data protection should be treated as secondary due to the corresponding provision of evidence. According to the BGH, data would be collected from the party filmed with the dashcam after an accident (counterparty, injured person, witnesses, ...) in order to maintain contact, notify the insurance company, and so on.

Note: This is not legal advice. This article was the result of careful research, but does not claim to be absolutely correct. If in doubt, ask a lawyer.

Dashcam videos in court are permissible according to a BGH judgment of May 15, 2018 and data protection is to be regarded as subordinate in individual cases. The Federal Court of Justice is paving the way for the 100 percent legalization of car cameras.

Is the dashcam legal in Germany?

With the BGH ruling in the process for file number VI ZR 233/17, dash cams are not per se legal in Germany. Anyone who films permanently and, above all, also records people (pedestrians, cyclists, people in cars) in such a way that they can be identified, must still expect a fine. This is also and above all the case when the continuous recordings are stored for a long time, maybe even dragged to storage media other than the dashcam - and when the film is being filmed while the car is parked.

According to the Federal Court of Justice, dashcam videos that result from a time-limited recording and are clearly helpful for providing evidence of the case are now permissible in court. If other people are clearly visible in addition to the other party and witnesses, whose data is also collected in the context of the processing of the accident, one can argue that they are in the picture by chance and are therefore not aware of or intentional personal rights are attacked.

Videos from dashcams: weighing up the individual cases

How to, among other things at the Tagesschau can read, the BGH ruling on dashcam videos in court does not mean that you can film permanently. It is also not a 100 percent promise that from now on all courts will allow the car camera to record every time a traffic accident is transformed. Perhaps a decision will not be made until after the inspection.

The verdict does not mean that you can always film automatically. Permanent recording is still not permitted. However, this inadmissibility does not mean that the pictures may not be used in civil proceedings, argued the judges of the BGH. It is always a question of weighing up the individual cases.

What is actually behind the term?

The English term dashcam is a combination of Dashboard (Dashboard) and Cam / Bedroom (Camera); In Germany, in addition to this designation, dash cam, auto cam, car camera, traffic camera and the like are also common. In my opinion, it is unlikely that you will be taken out of service and fined because of these devices while driving. Because, depending on the model, the video recording devices are very similar to the navigation devices permitted in Germany - so misunderstandings would certainly be the order of the day in the event of appropriate traffic controls.

Will the car camera be allowed in its entirety once?

A month ago it looked as if the dashcam would never become legal in Germany and the recordings of such a camera could not be used in court. Back then I did in this post reported about it. But I have already shown that a large number of respondents in a corresponding survey on the use and legalization of dashcams spoke out in favor of the devices. In combination with the current ruling by the Federal Court of Justice, I think it is only a matter of time before dashcams - perhaps with the corresponding rules and regulations behind them - can be used completely legally in Germany.

Recommended reading: Press release of the BGH on the matter