Big Jambox from Jawbone - my test 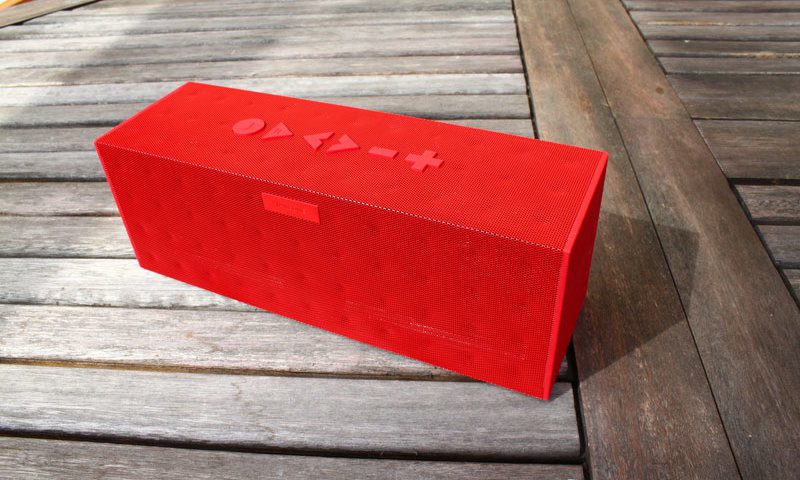 A few weeks ago I received an inquiry in my mailbox asking me to let me test the Big Jambox for a while. If I wanted to, I could post a review on my blog. Since I had been flirting with the Jambox for a long time, but always backed off because of the price, the offer came in handy, because I was able to put it through its paces without having to pay almost 300 EUR on the Amazon table to have to lay. 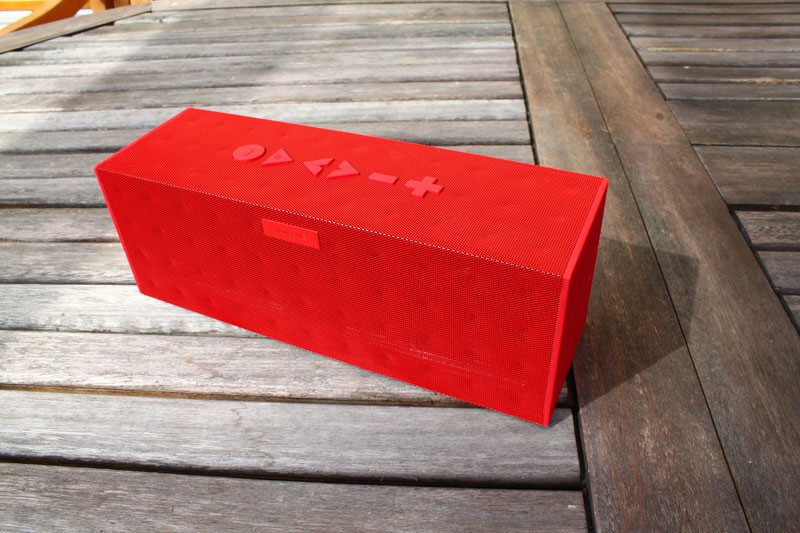 Jawbone's Big Jambox has not only received high praise in the press. The customer ratings that can be found on Amazon, for example, are also convincing! (Photos: JK)

Jambox needed? Nothing helps! Of course I could have bought the mobile speaker system second-hand, but surprisingly it is at Amazon also used not for less than 200 EUR - a clear sign that the owners are either very happy with the device and / or have no problem selling it for a high used price. Conclusion: The Big Jambox is a coveted thing!

Today the weather is great - that's why the unboxing is carried out on the beautiful green lawn. I think that's how the bright red of "my" Jambox really comes into its own. But joking aside: In the photos you can see not only the battery-powered Bluetooth speaker and instructions, but also the accessories in the form of various cables: power supply, [USB cable-> usb cable] (for firmware updates), 3,5, XNUMXmm jack cable - everything you need together. 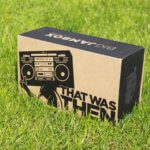 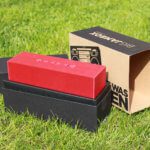 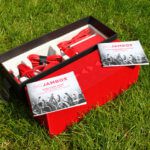 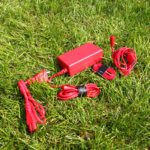 The optics - I don't just look at inner values!

After unpacking, I was really curious to see how getting to know the Big Jambox would go. The first thing I noticed was that the surface is not as plastic as it can be seen in most of the Amazon photos. You have smooth surfaces on the sides that somehow feel rubberized. I suppose you won't be able to knock off a corner of the material because it gives quite well. 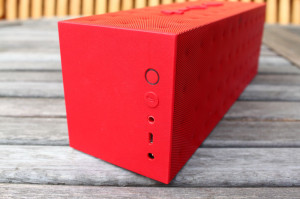 The side panels are shockproof and can withstand rough everyday music without any problems (Photos: JK).

The long sides of the music cuboid are made of perforated sheet metal that is painted to match the plastic elements. The perforated sheet has small regular "dents" every 2-3 cm that perk up the look a little. My overall impression of the outside: Very chic and also practical, as it is definitely built to be durable. The Jambox will surely survive a trip in a backpack without damage - so you can really take it with you.

With the colors "Graphite Hex" you have a kind of honeycomb pattern instead of the "dents" and with "White Wave" an overlapping wave pattern. One can look at the different patterns look at Amazon.

Power on and pair the Big Jambox

After I - contrary to my usual habit - looked at the small, straightforward instructions, the first steps to music were clear: switch on and start paring. To do this, first press the on / off button (the upper one). Here comes the first surprise, because the Big Jambox is very communicative and greets you with a nice welcome sound. As a long-time Macintosh user, the jawbone box was even more likeable to me than before. I once recorded the switching on and off for you in the video, so that you also get something. 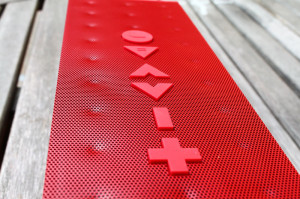 On the top of the jambox are the controls that you need more often.

Then the paring continues. This is also very simple: You press the next button for one or two seconds and you get the announcement "Big Jambox is in pairing mode, waiting for a device to connect." If you'd prefer the Jawbone Bluetooth speaker to speak to you in German, you can read the instructions here (coming soon!).

The ring around the power switch will now flash and indicate that the Jambox is waiting for a Bluetooth device. So I pulled out my iPhone 5 and went to the Bluetooth menu (Settings -> Bluetooth). There it takes a short moment until the entry "BIG JAMBOX" appears under "Devices". You click on this and the Bluetooth connection should be established.

Range of the Bluetooth connection

After pairing, I immediately tested the range and wandered through our garden with my iPhone in my pocket while the jambox was on the garden table and was busy filling the terrace with sound. Our garden is not very spacious now, but I was able to walk 10-15 meters before the reception broke off. That only happened when I stood with my face to the jambox and my body effectively shielded the BT signal. When I held the iPhone in my hand, even 15 meters wasn't a problem. 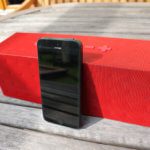 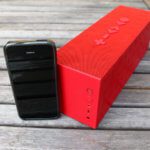 The sound: is the Big Jambox really a sound miracle?

Out of interest, I read a number of tests and reports on the Big Jambox months ago and time and again I found users who were totally surprised by the sound and volume of the device. What can I say: It was me too. The "roaring cube", as some people like to call these small speakers, is really extremely loud and has a convincing sound. I have the volume on my iPhone about a quarter of the volume and thus have enough volume to listen to music while working.

If you adjust the volume to 50%, it is already so loud that you no longer want to sit at a table with the jambox. And by that I really only mean loud - the sound is flawless and undistorted. If I set the volume to 75%, even in our living room it is so loud that one would like to move into the next room.

To be honest, I only tried 100% volume by placing the Big Jambox in the living room, then going out onto the terrace and then starting playback on the iPhone with the terrace door closed. What can I say: It was so pleasantly loud through the walls and windows that you could comfortably listen to music on the terrace while our hearing-impaired cat sat on the sofa and wondered where the music was coming from. In a nutshell: The device has the potential to fill a party with sound at home - and does not even buckle in the bass. I was excited.

The sound of the Big Jambox compared to a mini system

We happen to have a Philips mini-system in the living room that is about 4-5 times as large and twice as deep as the Jambox. The mini system is only a few months old and was not a cheap model when I bought it. 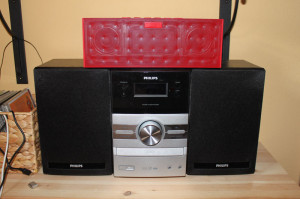 The Jambox doesn't have to shy away from a comparison with my mini-system (Photos: JK).

To have a comparison, I let the system compete against the Jambox. After switching back and forth several times, I couldn't say what I liked better now. The sound of the Jambox may be a bit more bass-heavy, but the sound quality was absolutely on par with the mini system - and that in terms of size. Compared to floor-standing speakers, the jambox will surely have to fit, but - hey! - we are talking about a battery-operated loudspeaker that is not even as long as an A4 sheet of paper!

My conclusion on the sound of the Big Jambox: It's BIG! Not just the volume but also the sound quality. The Jawbone loudspeaker fulfills all of my PA requirements, from the garden to podcast listening in the office to funky shower music in the bathroom. And the Big Jambox can handle a 30-40 square meter room with people who want to fidget without any problems.

Hands-free calling and telephoning with the loudspeaker system

I have not tested this functionality as I am not a speakerphone user. I prefer to use the Apple headset when I have to call him in the car, but that's a matter of taste, of course. For most people, the only important thing is that the hands-free function is available. If you can see the rest of the jambox, the sound should be good too. For this reason, I will not go into detail here.

Customer ratings and tests on Amazon

I wasn't influenced by others in my test, but I always like to see what other people write about devices that I present. The Big Jambox currently has 10 customer reviews and EVERYONE gave them 5 stars (maximum rating). That speaks for itself and explains why there are few used devices and why they are still so expensive: once you get your hands on the Jawbone BIG Jambox, you won't want to give it back.

Where can I buy the Big Jambox?

Well, that's a really good question, but it's easy to answer. The jambox can be found for example in all colors on Amazon. And if you want to try to buy the device used, you can take a look here.