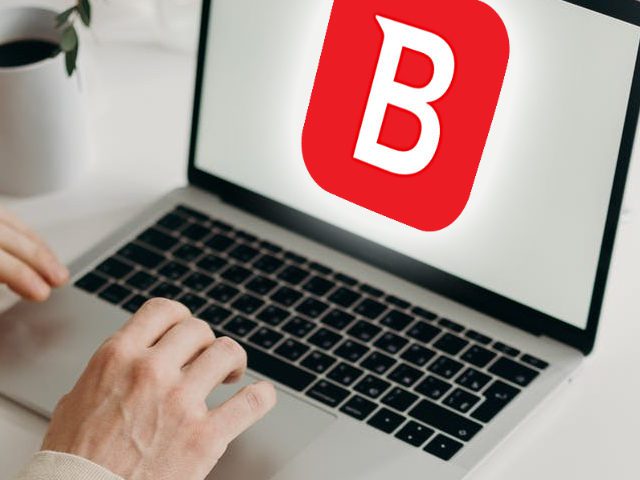 Bitdefender has an antivirus app for the Mac, but it can do more than just detect viruses and render them harmless. For example, a VPN service is integrated, and there is Internet protection for browsers such as Safari, Chrome and Firefox for safe surfing. In the following I will show you my impression of the Bitdefender Antivirus for Mac app. Details and the download can be found on the official website for Virus protection for the Mac from Bitdefender. Transparency notice: I received a free license for the full version of the program for this test report. But this does not affect my opinion.

Bitdefender Antivirus for Mac in the test - Here you can find my experiences with the antivir app for macOS including VPN and other functions.

You can download the antivirus app for macOS quickly and easily from the developers' website linked above. Then you start the downloaded installation file and click your way through the setup. Once the program is installed, you may have to assign it a few more permissions, such as full access to the hard drive. This is important so that all existing files and programs can be scanned. It can also be important for the app and its updates to allow the app download in the security menu of macOS. Of course, this does not apply if you download it from the App Store - but in the end you have the same app. 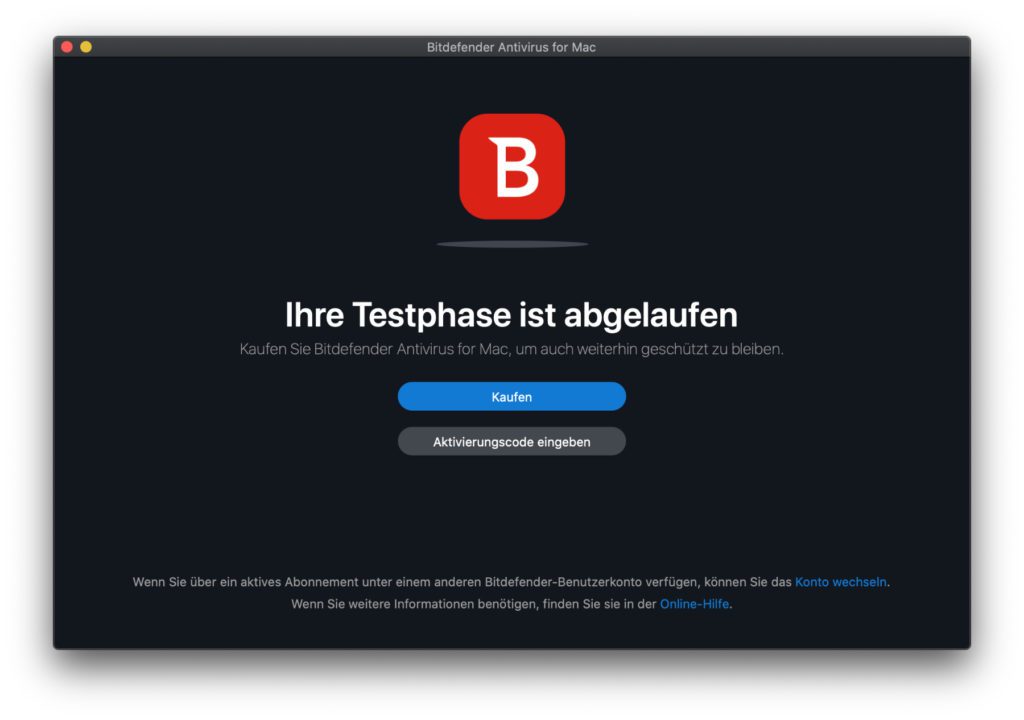 After a free trial period, you can buy the full version or enter a key. I was given a license key for the test report here. 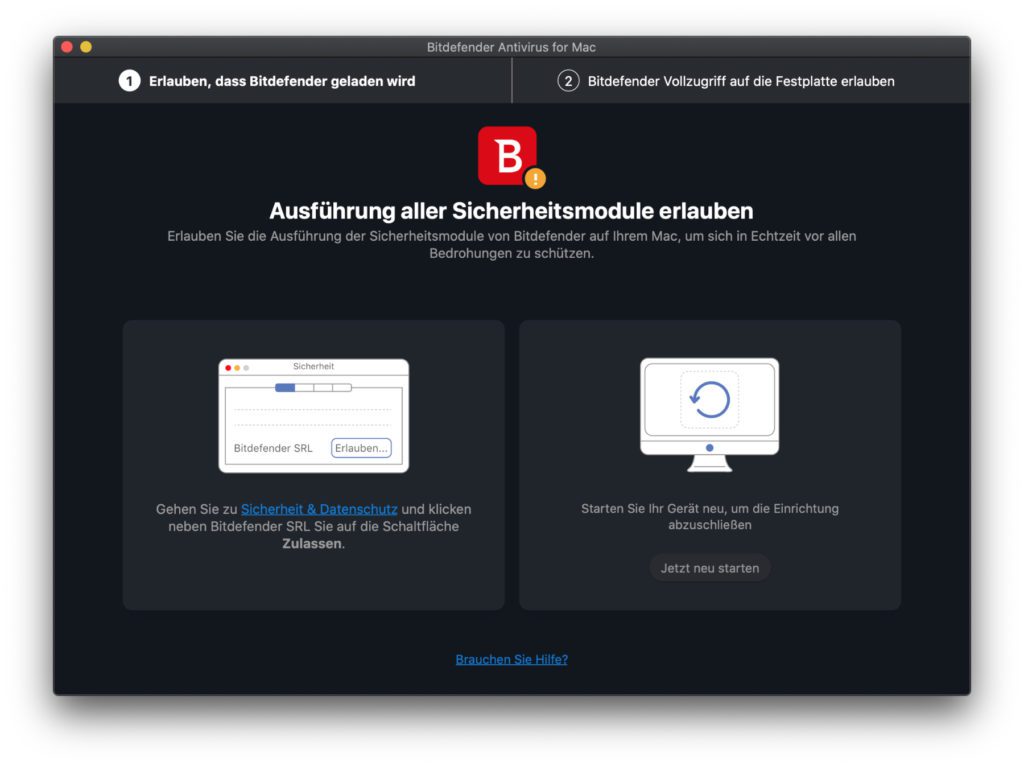 Especially if you download the app from the Bitdefender website, you will probably have to assign a few permissions at the beginning. 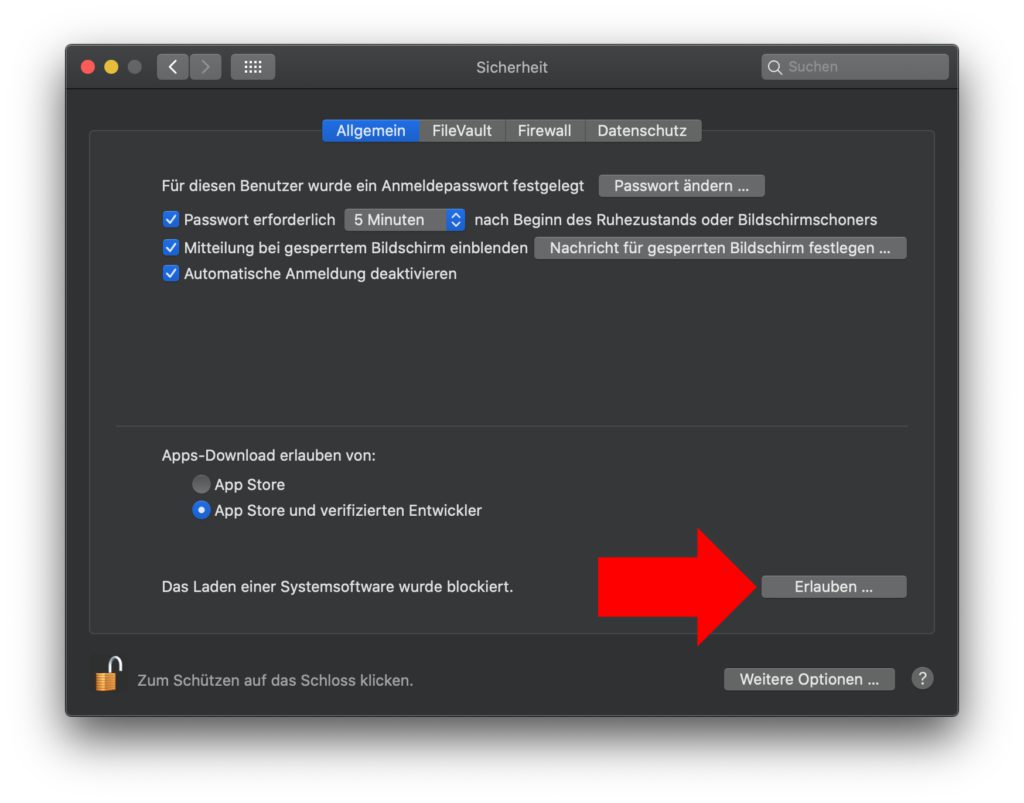 The dashboard as the starting point for macOS virus protection

The macOS app and the Bitdefender iOS app are quite similar. If you have the Bitdefender iPhone app So you already know, you can get along intuitively with the Mac version. But even if you have no experience with Bitdefender, getting started is easy thanks to the clear interface. It starts with the dashboard. Here you will find the most important functions as well as a few recommendations for the procedure in the app to start with. The following are recommended, for example: complete system scan, installation of the TrafficLight extension, activation of notifications, creation of "secure data" directories and activation of Time Machine backups. Individual functions are also displayed in tiles. 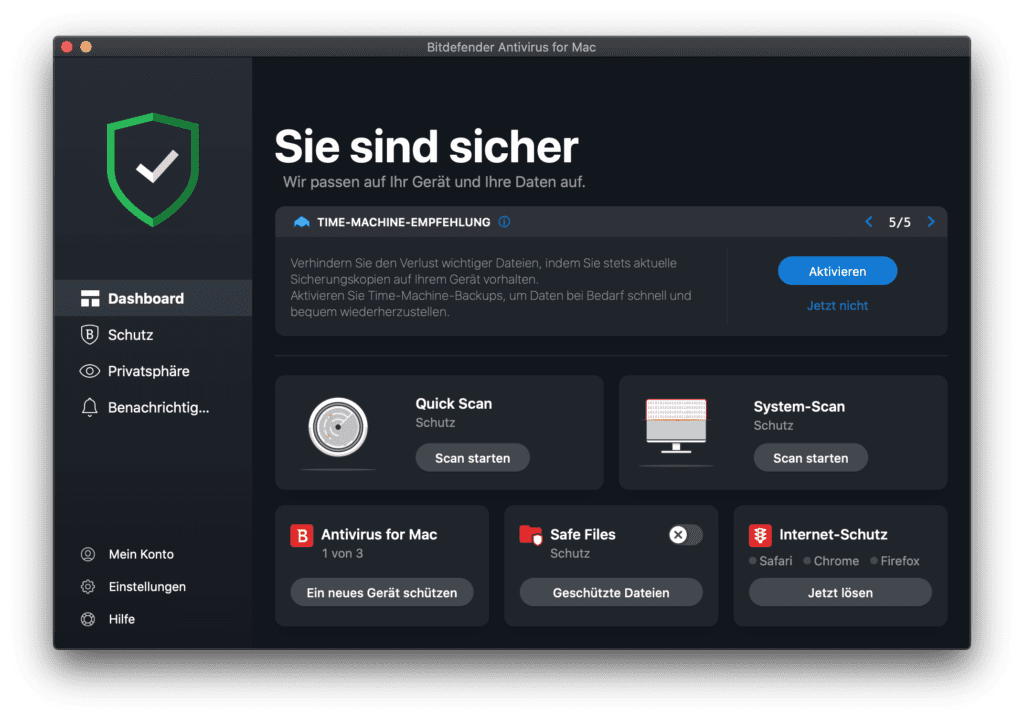 At the beginning you land on the dashboard, there you can already use the most important functions: system scan, quick scan, setting up additional Macs (with the appropriate license), safe files, etc.

The Protection tab in Bitdefender Antivirus for Mac

On the left in the app window you will find the tab or the menu item Protection. This shows you the virus protection, Internet protection and ransomware protection functions. These features are hidden behind the three tabs that you can select above the right-hand column of the window: 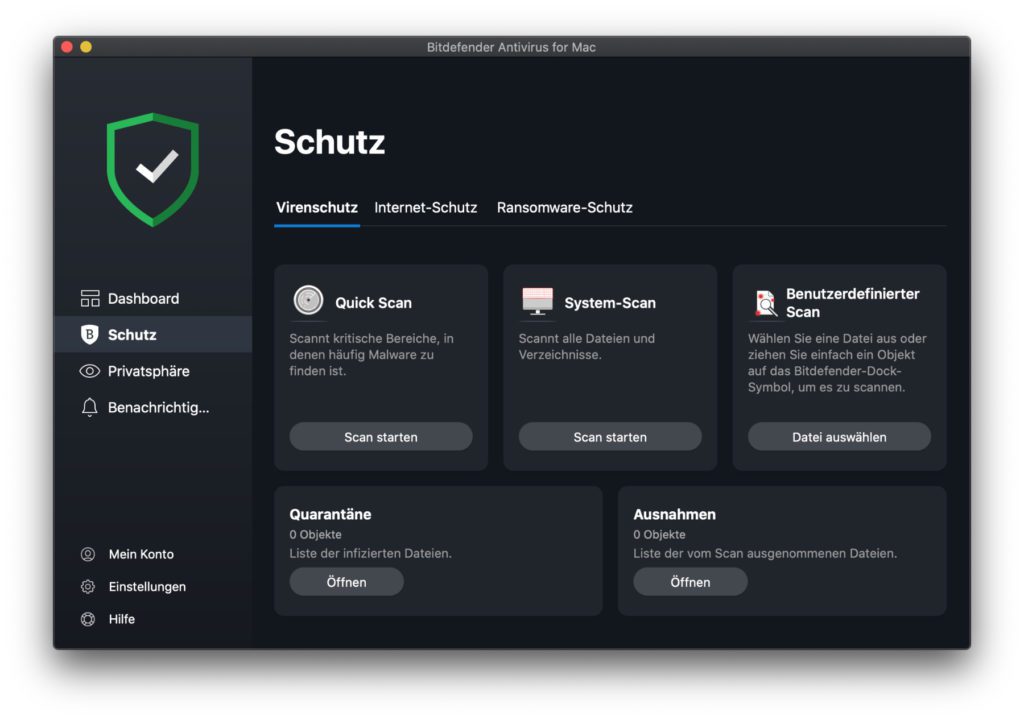 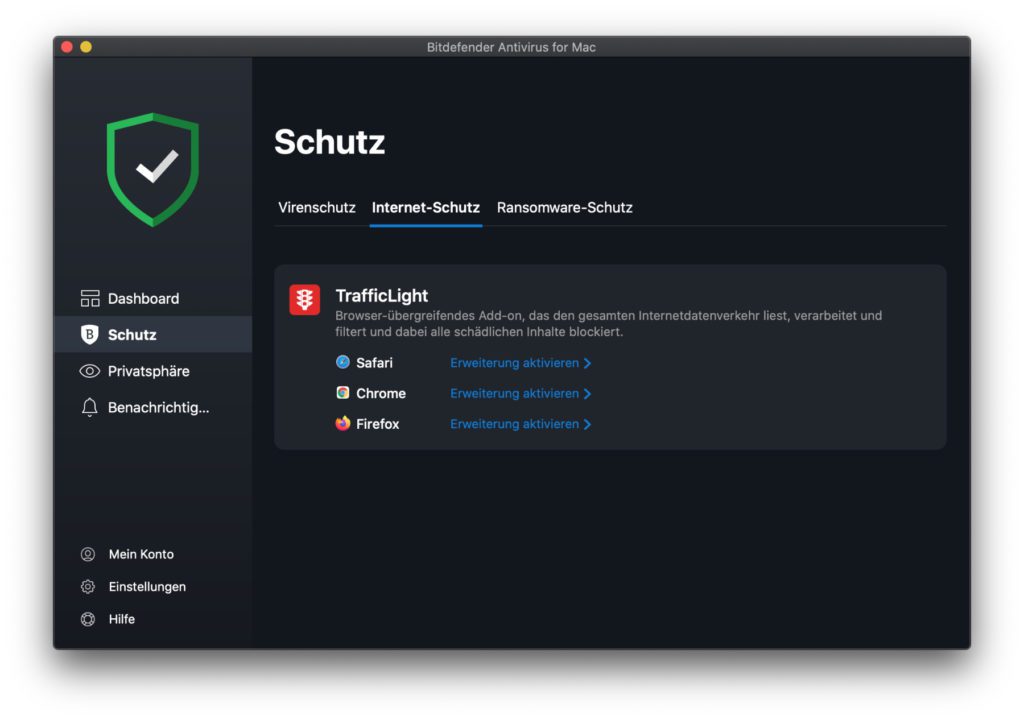 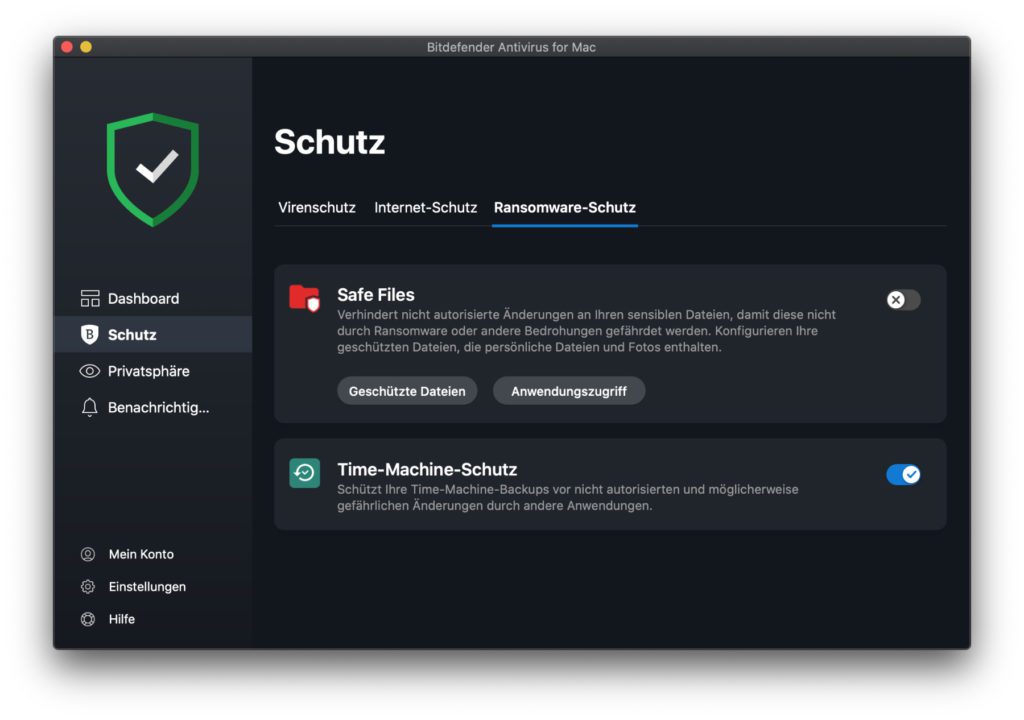 The Bitdefender Antivirus for Mac app is not just about virus protection and defense against ransomware. You should also be able to protect your privacy with it. On the one hand, you can do this by encrypting your data traffic (up to 200 MB per day) via VPN. On the other hand, it shows the anti-tracker extension for web browsers that is blocking trackers. I would recommend this for Chrome and Firefox, because Apple has already built a tracker block in Safari. But you can also play it safe and install the extension in Safari. It is offered for all three browsers. 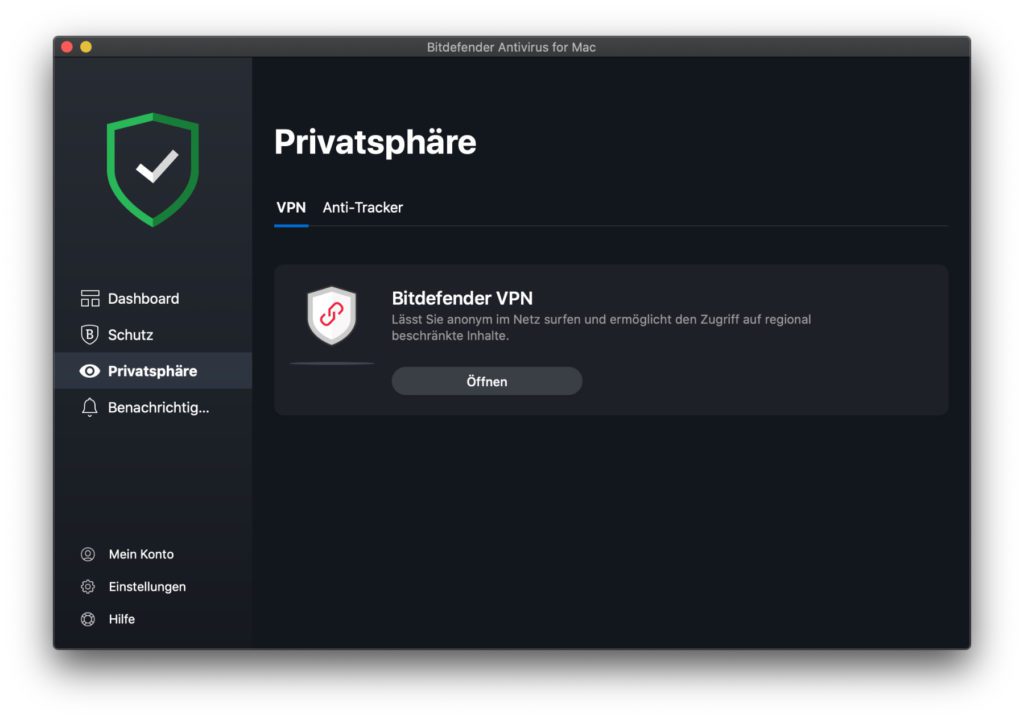 For privacy, Bitdefender Antivirus for Mac offers a VPN service, among other things. This protects up to 200 MB of Internet data per day. 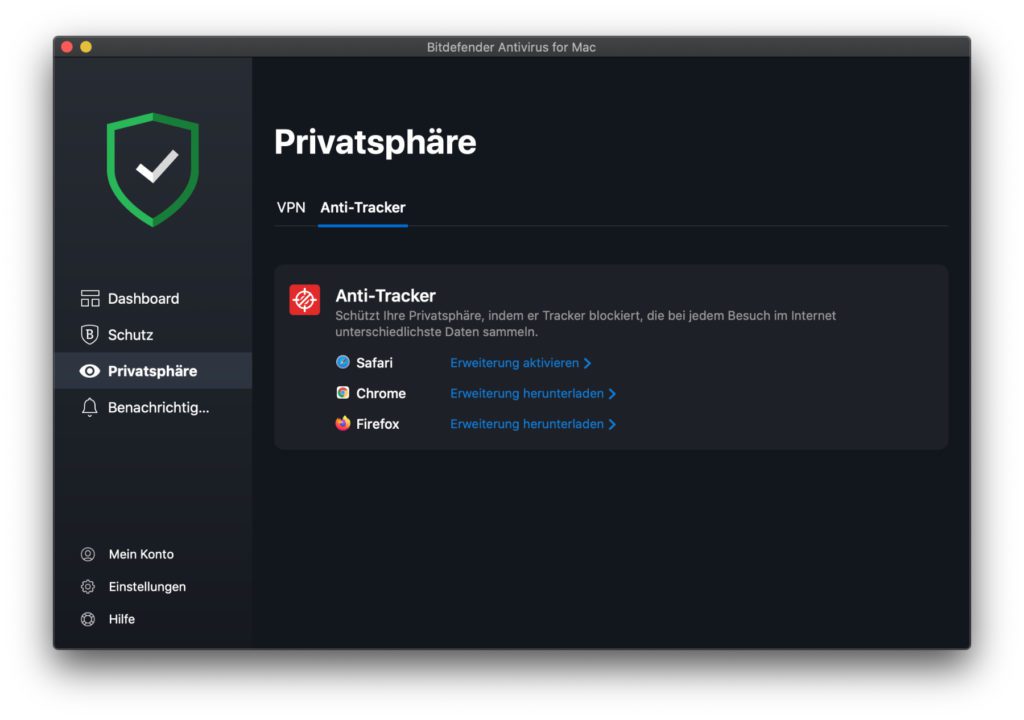 There is also the anti-tracker extension for the web browsers Safari, Chrome and Firefox.

Notifications: an overview of current events

The last menu item is "Notifications". Here you can follow the latest events. When was an update installed, when was it scanned and most importantly: when was which threat found / blocked? You can either display all notifications, only those from the critical area, the warnings or general information individually. 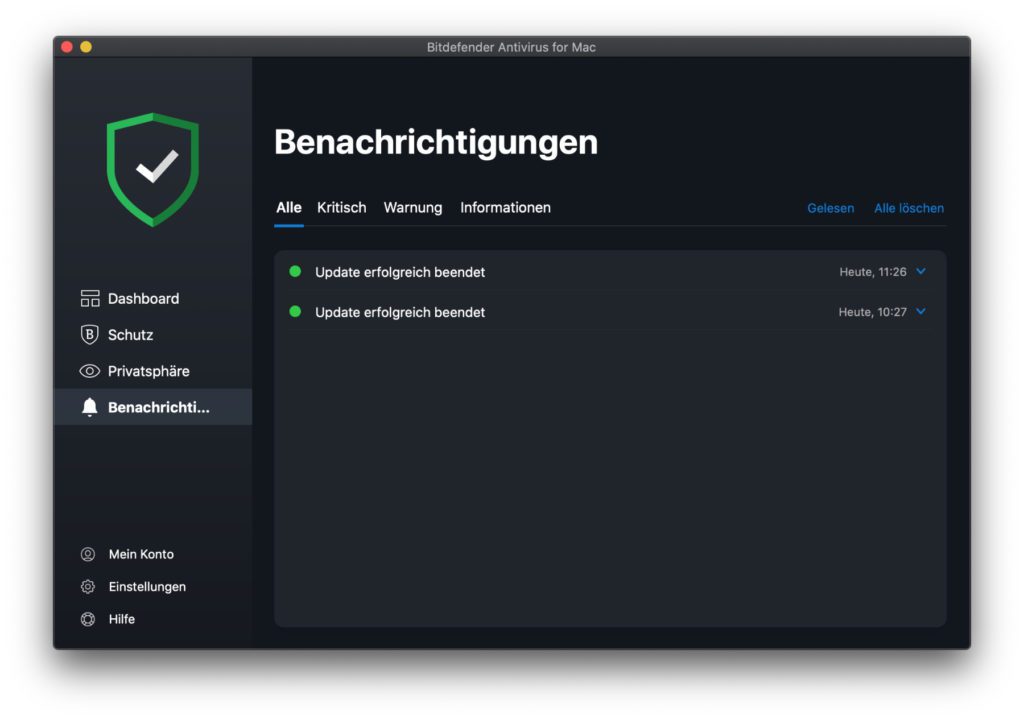 At the bottom you will find the items "My Account", "Settings" and "Help". Here you can see the validity of your subscription, make individual protection settings, define the procedure for any threats or infections found and set up even more important things under Settings -> Other. Because there you determine whether you want to receive information about special offers and send product reports. Personally, I have set both controls to Off because I don't like either. Finally, you can call up the manual and the support center under Help. There is also a quick guide as an introduction to the program. 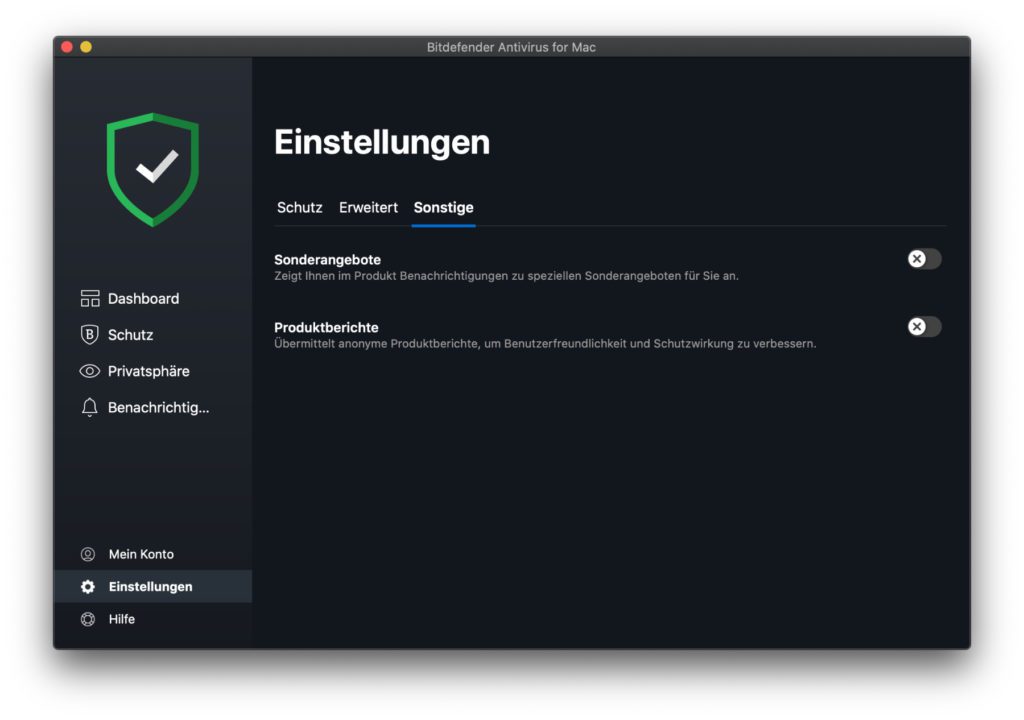 Experience with Bitdefender Antivirus for Mac

Apart from the fact that after the installation you probably first have to set up authorizations and deactivate the functions you do not want in the settings, Bitdefender's offer is quite good. Depending on the size of your hard drive (s) and the number of files and folders, the scan of the Mac will of course take a while. However, you will be shown directly how much has already been scanned, found and fixed. 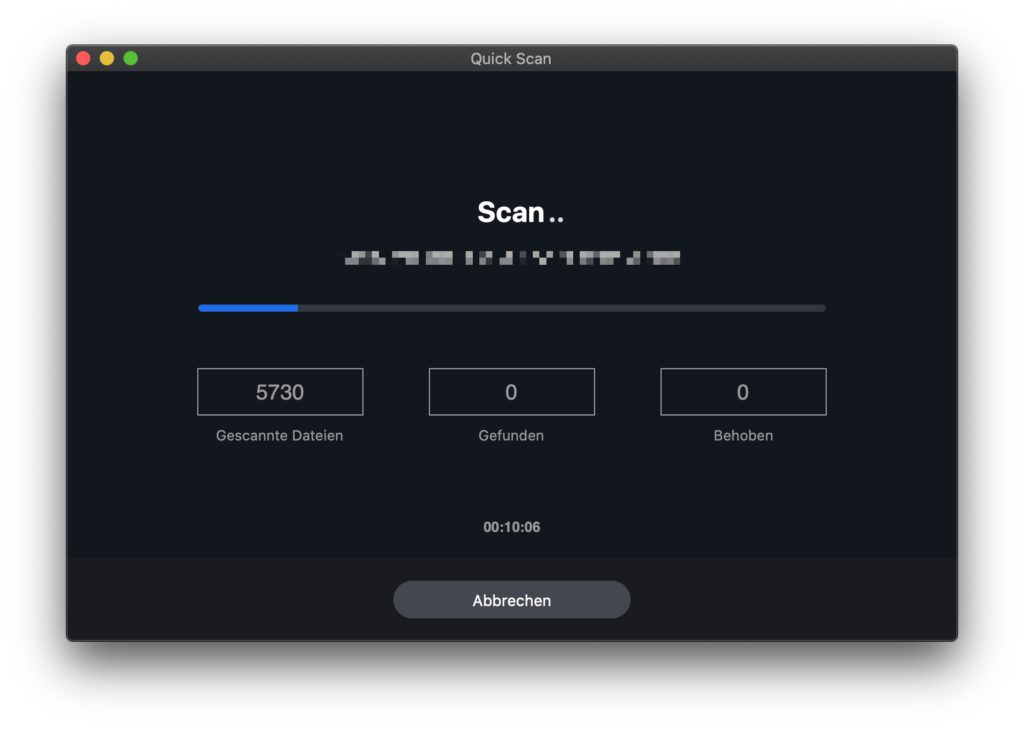 The overview of the results in the scanning process is kept simple and understandable.

I also think it's good that in addition to the virus scanner, which gives the software its name, numerous other functions and extensions also play a role. Whether safe surfing in different web browsers, encryption of the data via VPN (e.g. as protection in one public wifi), the protection of individual files and so on - all of this rounds off the offer and also justifies the price of € 19,99 (1 Mac) or € 29,99 (3 Macs) per year. 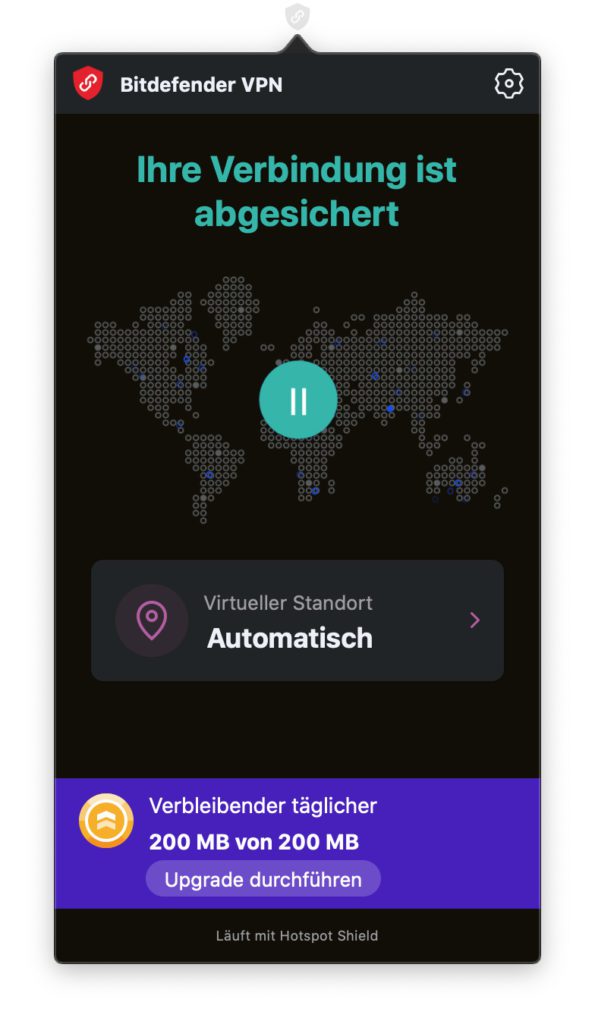 If you activate the VPN function, a VPN symbol can be found (next to the Bitdefender symbol) in the macOS menu bar. You can use it to manage the encrypted connection and select servers / server locations.

Conclusion on Bitdefender Antivirus for Mac

I think the functionality of the Bitdefender offer for the Apple Mac with macOS is very good. Those who use the Internet properly will hardly have anything to do with viruses or malware, but something can always come in via e-mail, for example. I also think it's good that individual files can be particularly protected and the data transfer to the Internet can be encrypted via VPN. I see the Internet and tracking protection by means of extensions for Safari, Chrome and Firefox as a good extra. So if you want a powerful and easy-to-use program against viruses, ransomware and Co., you should click on the page linked at the beginning.