Blue light filters are probably already known to all those who spend a lot of time on PC, Mac and / or smartphone and whose eyes are strained by the blue light from the screen or display. There is a suitable blue light filter app for Android smartphones, the iPhone and iPad, and blue light filter foils are available for PC and Mac. However, these also have their disadvantages, such as the fact that smaller fonts are blurred or flickered during office work. In this post I would therefore like to introduce you to blue light filter glasses. These are also sold as gaming glasses, office work glasses and the like. A test will follow shortly;)

Blue light filters are available as Night Shift from Apple on Mac and iPhone as well as Windows software and Android app. But blue filter glasses are also recommended - for office work, gaming and more.

While blue light with waves of 470nm to 500nm is usually understood as good and helpful for the human organism, it is assumed that blue light in the order of magnitude of 380nm to 470nm is harmful to the eye and thus the entire nervous system. It's just stupid that this type of harmful blue light also comes from monitors and displays.

Anyone who spends more than two hours a day in front of a PC, Mac, smartphone and Co. should think about blue light filters as a film, a blue light filter app, the night mode of the operating system or blue light filter glasses. Here I have listed the first five Amazon bestsellers for the glasses from the manufacturer GUNNAR (they are available with frames in black, red, green, white and various stylish designs):

If you already have glasses and still want to protect your eyes from blue light, there are also corresponding clip-ons. I once ordered this model from DUCO and will also present my experiences from the test to you: 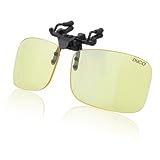 As already described above, I ordered the blue light filter for glasses wearers. Since the end of 2017 I have been using it especially when I have been working on the computer for a long time. I often use the glasses attachment with yellow lenses in combination with the “Night Shift” function of macOS. So the eyes are protected twice. I can definitely recommend the DUCO model and working with blue light filters in general. In any case, take a look at the overviews / graphics in this post, then you will get to know the advantages of eye protection again from a scientific point of view;)

Blue light: effects on hormonal balance and the eye

But what is so special about blue light, wavelength in nanometers or not? Well, viewed quite logically and simply, the color blue ensures the “awake mode” in humans. Especially light blue, so to speak, sky blue, can lead to a lot of serotonin in the body. After all, a blue sky shows us diurnal animals that we have to be awake. At Wikipedia stands for the following, among other things: "As far as we know today, serotonin essentially promotes the wakefulness.“Other sources suggest that serotonin suppresses the release / concentration and effect of the hormone melatonin. Melatonin is a kind of "sleep hormone".

Blue does not appear as concentrated in a natural light mix as it does in artificial light sources, monitors and displays. Therefore, they are also harmful to the eye. Source: Medium.com / The Mission (click to enlarge)

So much for my foray into biochemistry. Professionals in this field may fail to see my amateurish nature;) In addition to the confusion of the hormonal balance, the eye as an organ is also directly affected by too much harmful blue light. "Too much ultraviolet and blue / purple light can [...] not only lead to painful inflammation of the conjunctiva and cornea, but also to chronic damage […] “, You can at Zeiss.de read. Especially if you work a lot on your computer or play video games, you should think about a blue filter, blue filter glasses or gaming glasses.

Apple is known to be interested in the health of its users. It is not for nothing that the main focus of the Apple Watch is on fitness, exercise and a varied everyday life (Moving, exercising, standing). On the Apple Mac, iMac and MacBook there is therefore the so-called “Night Shift” mode under the macOS operating system with regard to the user's eye health. Night Shift changes the color spectrum of the Mac monitor to warm at sunset. You can activate and calibrate Night Shift on the Mac under Apple (apple symbol) -> System Preferences -> Monitors -> "Night Shift" tab. More information is available from Apple support.

Since iOS 9.3, Night Shift has also been available for the iPhone, iPad and iPod. You can find the blue light filter for the iPhone screen under Settings -> Display & Brightness -> Night Shift. With newer iOS versions (iOS 11, etc.) you can also simply set a corresponding option in the control center, which you call up by swiping up on the display. Again there is more information and instructions directly from Apple on the corresponding Support page. Since the option has been working on Cupertino smartphones since the iPhone 5s, most users can do without blue filter apps or other software.

How do you use the filter against blue light on the iPhone or other Apple devices such as the iPad or iPod touch? Feel free to leave a comment with your tips and your experiences. Further down you will also find the link to the Sir Apfelot Forum, where you can exchange ideas on this and all other Apple and technology topics.

In addition to Night Shift and similar functions on Apple devices, you will also find a built-in filter against blue light from the computer monitor in Microsoft Windows. The current Windows 10 system in particular has such a function, and it has been since an update in 2017. But the feature can also be used now in 2021, when I am writing this update. And this is how you can activate the Blue Light Filter in Windows 10:

If you want to shorten the instructions a bit, you can enter the term "night mode" in the search field of the settings or in the Windows Cortana search field. Then you also come to the corresponding setting. You can also set a schedule for night mode as a blue light filter under Windows 10, so that, for example, it always starts automatically in the evening at 20:00 p.m. or the like.

So that we really don't let any target group down, I would like to show you one or the other app for Android users. There is not THE one app in the Google Play Store that is supposed to work as a filter, but several filters against blue light on the display. These Android apps, among others, have very good ratings:

Conclusion and your experiences

Facebook, Twitter, Windows and Co. rely on the color blue. However, not only does blue light keep us awake, the violet and ultraviolet rays also damage the eyes. There is a suitable app and software for Windows and Android - if you use Apple products, you can use macOS or iOS directly. In my opinion, blue-filter glasses are best for daytime computer work. In addition to office work, games on PC, Mac and TV should also be more pleasant to play with filters. I will soon be doing a test of the DUCO clip-ons and reporting whether they help. In the meantime, you are welcome to leave your experiences with blue filter products and apps as a comment;)

You can find even more information and help - also and above all on Apple devices, operating systems and apps - at Sir Apfelot Forum as well as once a week Sir Apfelot newsletter. Just take a look.