Tip for LTE users: Save mobile data volume on the Mac with the Opera Turbo browser 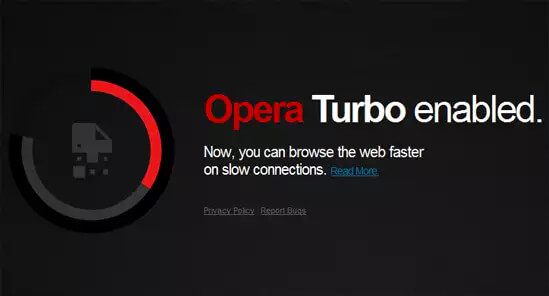 I have recently become one of the rural LTE users who are blessed with a good speed of 50 Mbit / s, but unfortunately do not have a flat rate. This means that you get a fixed volume of data every month that you can use via the Internet line or via the wireless connection via LTE. If this data volume is used up, you are throttled and can only surf in slow motion.

I work on the net every day and have to send archives with photos back and forth every now and then. If you then listen to music on Apple Music while working and watch one or two films on Amazon Video, then even the 30 GB that you have included in the largest Telekom LTE package are quickly gone.

Opera Turbo switched on - from now on you can travel much faster and more economically.

I have thought of various ways of reducing your own consumption of the data volume. One option that is particularly helpful for people who frequently visit "image-heavy" websites is to use the "Opera" web browser (here for the Download for Mac). Basically it is a browser like Safari, Firefox and Chrome too, but it offers an option called "Opera Turbo", which is very suitable for saving data volume when surfing.

To use "Opera Turbo", start the browser and then select "Opera Turbo" in the "Opera" menu. If a tick appears there, you are now using the "turbo" and save one or two megabytes of data that you would otherwise have used. 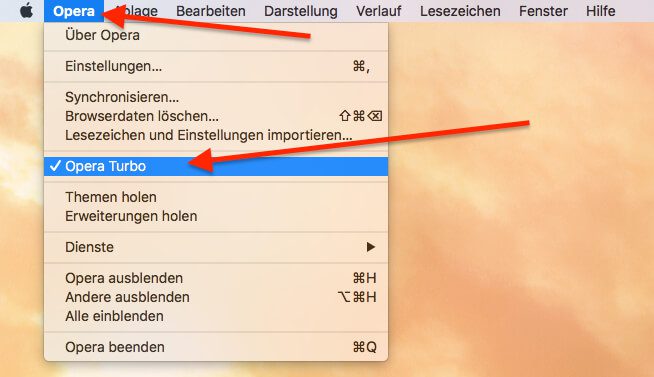 On the Mac you can switch on Opera Turbo in this way: menu "Opera" and there click on the item "Opera Turbo". Then a tick should be visible there and you should get a message that Opera Turbo is now active.

This is how "Opera Turbo" works

The functionality behind the feature is easy to explain: In contrast to a common browser, which shows the graphics on websites directly as they are delivered by the server, Opera in "Turbo mode" only shows compressed graphics, which previously ran through the Opera server.

That means, no matter how well the webmaster of the website in question has optimized his photos - the Opera servers get the most out of them in order to calculate them as small as possible (based on storage space). The trick is that only the opera-optimized image data are sent over the LTE radio network (or other connections).

This can save a lot of data, because many webmasters are not conscious of keeping their photos and graphics as small as possible. In times of DSL and high connection speeds, this is usually not necessary.

In order to respect the privacy of the users and not to temporarily store "critical" data, encrypted connections are not "touched" by Opera Turbo. This means that if the Internet address is "https" in front, then the data traffic does not ring via the Opera server but only between the respective web server that is responsible for the website and the Mac at home. Internet banking and many shop pages are therefore not influenced by Opera Turbo and are not compressed.

Unfortunately, many other websites are now also encrypted using SSL, for which Opera Turbo would make sense: Pinterest, Facebook and the like. However, because they use https, Opera Turbo does not intervene and does not save a byte of data. :-(

However, it works for many other websites that have not (yet) switched to SSL:

The addition "still" is deliberately built in, because Google said some time ago that the SSL encryption of websites is a ranking factor that results in the website appearing higher up in the Google search. So if you are actively working on the better placement of your website, you will sooner or later switch your website to "https" and thus unintentionally undermine Opera Turbo.

Opera Turbo settings: Can no longer be configured on the Mac

If you read a little more about Opera Turbo, you will often read the notice that you can configure the feature. This may have been the case once, but is currently no longer possible. If you go through the settings in the browser, you will not find an entry to configure Opera Turbo.

What MB of data can you save with Opera Turbo?

That's a good question that I can unfortunately only answer with one example. In Opera there is no display that says how many bytes of data would have been used normally and how much an Opera Turbo has saved.

However, I was able to determine it through an additional program. I have the tool on my Mac Tripmode active, which allows the data traffic to be released only for certain apps. In addition, the program can be used to "measure" how much MB of data has been used in a session. I did a little test with it and called up the following websites - once with Firefox and once with Opera Turbo:

While I used a total of 15,6 MB with Firefox, Opera Turbo presented me with the same pages without any visible loss of quality with only 5,4 MB of data consumption. That is a saving of 65% - a remarkable figure that I would not have expected myself.

Despite all its limitations, Opera's turbo feature has been a discovery for me that I don't want to withhold from you. Although data compression does not work on many portals where I would have thought it to be particularly useful (see Pinterest), there are still enough newspapers and news portals that can be "slimmed down" a bit by using the turbo feature. I would definitely recommend the browser to people who spend a lot of time online and call up many different websites. This is where the greatest potential for savings exists.

An additional recommendation is in any case the combination with the above mentioned Mac tool "TripMode", with which the internet connection can only be released for certain programs.

I hope my recommendation will help one or the other who (like me) need to conserve their data contingent. :)