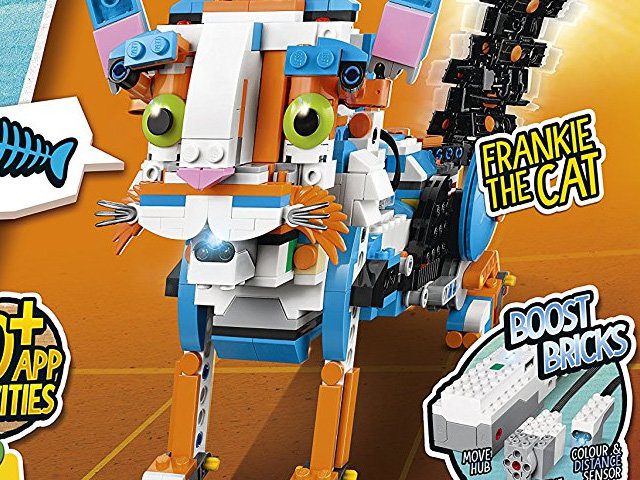 Already in January in connection with the CES 2017 I got you from the new robotics set Lego boost and reported some test experiences - the post you can find here. At that time it was still said that the new robot set with app control could be bought from August. Today I saw an advertisement for it on YouTube and thought I would have a look at Amazon to see if and since when it was LEGO Boost or the first set with the number 17101 already there. Lo and behold: it has been available for sale since July. The good thing is that there are now cheap used offers;)

At Amazon you can buy the LEGO® Boost Set 17101, and for a good price. But if you order at least 6 AAA batteries, then you can App also call up the building instructions ;)

You can now buy the set with 840 parts on Amazon and the two reviews from convinced buyers so far show that it is worth it. The headline of the 5-star rating is "A very good starter set from LEGO into the world of robotics and programming“, Which makes you want to order the LEGO set 17101 and get started. However, you should consider one thing beforehand: for optimal use, for programming and control you need a tablet with at least iOS 10.3 or Android 5.0!

Download the LEGO® BOOST app for iOS and Android

Building, programming and playing - the motto of the new robotics series from LEGO can also be found in the corresponding app. Because not only can you or your children program the individual models with the tablet app; It also contains the building instructions that lead to the individual constructions. You can download the app for iPad and Android tablets here:

5-in-1 and more: the individual robot models

LEGO Boost is a versatile building system with which you can basically let your imagination and creativity run free. If you have other Lego lying around in addition to the 840 parts of the 17101 set (847 parts according to the Lego Shop), then you can build a wide variety of robots and machines. With the set alone you can create 5 basic models that give you an introduction to building and programming.

Frankie, the coolest cat in town

As already noted above, I became aware of the new robotics set from Lego again through a YouTube advertisement. I picked out the spot for you:

Another note: for skill and creativity, the new LEGO Boost Set with the number 17101 is registered as an educational toy on Amazon. In the customer rating with 4 stars, you get a decisive hint - namely that you can only call up the building instructions for the app if batteries are inserted in the Lego device. And yes: you have to buy this, even if it is currently still in the technical details of the product page "Batteries necessary: ​​no" stands. But you definitely need 6 AAA batteries, preferably rechargeable batteries (Amazon Basics 12 pack).

Conclusion on the new robot set

The LEGO Boost Set 17101 With extensive technology, 5 standard models that can be expanded, and an app for programming, control and building instructions, I find it not that bad at a price of 139,99 euros (as of September 1, 2017). But sets at the Order through Amazon also 6 or 12 AAA batteries on top so that you can get started right away;) What do you think of it? Have you already been able to carry out a test and have gained experience that you can now share with us as a comment? Then always bring it on!