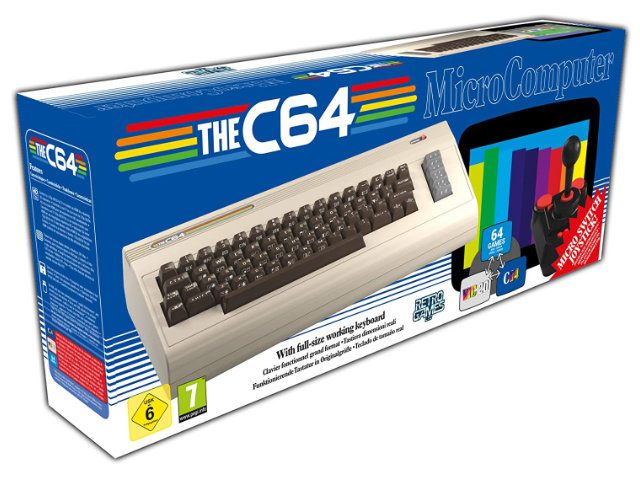 Anyone who has enjoyed playing video games on the Commodore 64 in the past will be happy about the C64 Maxi or C64 Mini today. With the Apple II, the Commodore 64 marked a gaming era in the 1980s. Because when the console market crashed due to a miserable oversupply and only from Nintendo Entertainment System (NES) could be rebuilt, the computers of the early hour remained stable. In this post you will find the two offers "The C64 Maxi" and "The C64 Mini", the appropriate book with tips and tricks as well as other great things for bread box fans: D

C64 Maxi and C64 Mini: the two retro computers with 64 preinstalled games offer Commodore 46 and VIC 20 systems as well as much more. You can find tips and tricks in Andreas Zintzsch's book.

Officially, the newly launched consoles in the computer look of the 80s are called "The C64" or "THEC64", but the English article is usually simply omitted. The C64 Maxi comes in the original size of the Commodore 64, with a working keyboard and USB ports. For the connection with modern televisions, projectors and other output devices HDMI-Connection ready. The scope of delivery includes the console, an HDMI cable, a joystick and a power supply unit with cable. In addition to old systems, 64 classic games are also pre-installed, which have become known on the Commodore 64 – also known as the “bread box” because of its shape. The overview is below. You can buy the C64 here at Amazon.

The C64 Mini - full power at half the size

The C64 Mini also builds on the look and games of the computer that was sold for the first time in 1982. However, this console is only half the size. So it also fits into the computer, console and game collection if there is actually not that much space for them. Despite the smaller dimensions, the 64 games listed below are also preinstalled here. The smaller model also has USB ports for controllers, keyboards and more. A joystick controller is already included in the scope of delivery. In the further course of this post you will find one to buy later. The scope of delivery for the mini model also includes everything you need to start playing - details and the options for buying can be found on Amazon.

Video with the The C64 trailer

Retro Games has a nice trailer for the C64 Maxi and C64 Mini. You can watch it as a video on YouTube or here as an embedded element. It's not just interesting to see the console in action. The reunion with classic games from the 80s also brings back memories. It is also mentioned that the old interfaces C64 and VIC 20 run on the devices in addition to the games.

These 64 games are preinstalled on TheC64

The unofficial manual for "THE C64" Mini and Maxi

THEC64 Maxi and THEC64 Mini are more than just simple game consoles with a pre-installed collection of old games. For their reproduction, for. For example, you can choose different display modes to reproduce the scan lines of television systems in North America - or just the old 4: 3 PAL signal. There are also classic operating modes: the original C64 user interface (Commodore 64 Basic V2) and VIC 20. How to find everything, what you can do with it and numerous other tips and tricks for using the retro computer in the book by Andreas Zintzsch read from the Bildner Verlag.

The publisher has also published a video in which the C64 Maxi is presented:

Great fan articles for friends of the Commodore 64

Finally, I'll link you to a few Commodore 64 fan articles; First and foremost the official controller, which you can buy for the consoles presented above. The Amazon boxes that I use to link may not be displayed in the reader view of your browser or the Sir Apfelot app. You would have to switch to the regular view.