Recall of the GoPro Karma: Copter should no longer be used, but should be returned 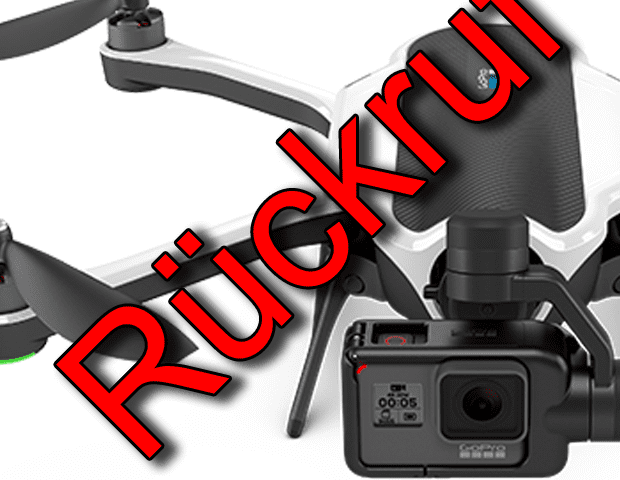 Handy, user-friendly, high quality and now recalled - that's it GoPro Karma drone. The Recall of the GoPro Karma drone came as a relative surprise and after the brilliant start of the model as well as just before Christmas as a real shock for the GoPro fans. In this article I would like to show you details about the recall, guide you to the manufacturer's official contact point and translate some information that is only given there in English into German. So you are fully informed about the GoPro Karma recall.

Reasons for the recall: Karma drone is losing power

GoPro wants to provide its customers with a great experience through the products it offers. In order to stay true to this motto, the GoPro Karma is now being recalled, according to the manufacturer. Although this is not a great experience per se for the end user, it is better than having to accept crashes or accidents caused by the defects in the drone.

According to the manufacturer, the main reason for the recall of the GoPro Karma drone is a performance problem that occurs due to the loss of energy ("power") during use. In other words: if you fly with this drone, there may be a sudden loss of energy. Then the device does not make the way back, the radio signal weakens or something else can go wrong: one possible consequence would be the crash of the drone.

Return of the drone: official information from GoPro

You can find all information about the recall of the drone at gopro.com/2016karmareturn. On the site you will not only find hotlines in the event that you have bought directly from GoPro or Best Buy, but also the corresponding online support. There is also an FAQ with important questions and answers about the recall; but only in English on the German side.

I would like to briefly translate the most important questions and answers for you here. So if you already have a karma of your own or have an order in progress (which you should cancel quickly if the retailer does not do so on their own), then you will get all the details here:

Alternative to the GoPro Karma drone after the recall

Now we were all happy about this very well thought-out quadrocopter from GoPro, and now we should do without it. If you are looking for an equally high quality Replacement model want to look around, then I recommend you DJI Mavic Pro. The linked article offers you comprehensive data and details as well as videos about the drone. If you have the DJI Mavic Pro want to buy then you can do this here.