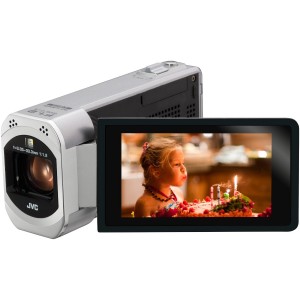 The JVC Everio GZ-VX 700 SEU is a very compact HD camcorder with good image results and technical data that are impressive. (Photo: Amazon.de)

The JVC Everio was my first hard drive camcorder a few years ago. For those times it had an intoxicating picture, an HD resolution and a long battery life. And even today, JVC is at the forefront with the latest version of its Everio HD camcorder. Compared to the old model, the JVC Everio has been significantly reduced again, making it one of the most compact camcorders currently on the market. As with other camcorders, the screen can also be opened and rotated so that you can see from the front when you are filming yourself or making recordings overhead (for example at standing concerts with basketball players around you). The screen of the JVC Everio GZ-VX 700 SEU camcorder is even touch-enabled, which makes quick operation much easier than the fiddly operation using the small buttons, as was the case in the past.

The touchscreen can also be used as a quick pause function: if you fold it onto the device, the HD camcorder is put into standby mode. If you open it again, it quickly "wakes up" again. The "little one" from JVC also has other features to offer: For example, it can also take time-lapse or slow-motion recordings and recording videos when something is happening in the camcorder's field of view is a nice feature. Speaking of the field of vision: the recording area captured by the JVC handheld camera is relatively large. This is very useful if you either want to make spectacular landscape films, or if you have been ordered by Aunt Gerda to film the birthday party in her small half-timbered house. Even in small rooms you can still see a lot in the picture!

The built-in WLAN mode in the camcorder is also very practical. This allows you to plug it into the local network and then load films and pictures directly onto your computer (in my case the Mac) without having to plug in a cable.

A small disadvantage is the slow "start up", which was a bit annoying even with my old JVC cam. It can take 10 seconds from switching on to the first recording. Once it is on and you just put it in standby, it is of course much faster to have it ready again, but spontaneous recordings, as I like to take with the iPhone 5, are unfortunately not possible.

Videoaktiv magazine tested 1 camcorders from the current range in its 2013/5 issue. The JVC Everio GZ-VX 700 SEU even won the test. It had to assert itself against the current comparison models from Canon, Samsung and Sony (there were two in the test). The only thing the authors had to criticize about the camcorder there was the long switch-on time that I already mentioned, the somewhat cumbersome menu navigation and the fact that the camcorder does not have a viewfinder. From my point of view, all details that I can do without or that are not so important to me.

Anyone interested in the camcorder can get it look at Amazon.