D-Netz, E-Netz, etc. - Why do cellular networks use letters as names? 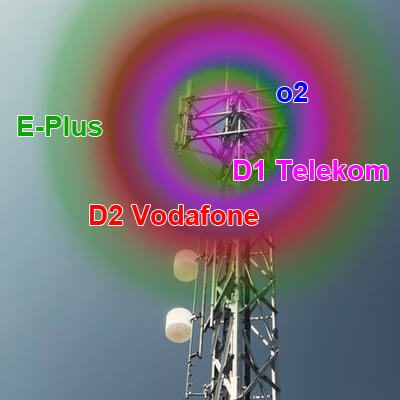 Cellular networks, too Cell phone networks have a long history that goes far beyond the mass private cellular communications that emerged in the 1990s. But why do the mobile networks have letters as their names and become D-Netz with the subdivision D1 and D2 as well as E-Netz or O?2-Net called? In this post I want to briefly show you the background and make a small comparison. In addition to the cell phone network information, you can also find one here in the blog Guide to GSM, UMTS, LTE, 5G with information about what is behind these abbreviations.

Cellular networks in Germany; Information on the history and development of cell phone networks can be found in this article.

That is why mobile networks use letters as names

The reason can therefore be seen in the history as well as in the course of the structure of mobile communications and its standards. It was a long way from hand-held calls in the ÖbL to numbers dialed by Siri in one of four (or three) networks. A, B and C networks no longer exist; Under the umbrella of Telefónica Deutschland, the E-network from E-Plus and the E2 network from O2 merged. In addition, there are always changes such as described here in detail.

Why there will probably be no F-network

Four networks are currently established in Germany, two of them (E-Plus and O2) have been merged for several years. Sooner or later there will be three large networks divided into D1, D2 and E. Instead of replacing these networks or adding another one (competitors would have to purchase corresponding frequency bands Raise billions) they are expanded. The last radio standard called 4G or LTE was introduced in 2010 as a renewal; In 2020, 5G is to be introduced as the fifth generation of mobile communications. The fact that these new standards are integrated into existing networks is, in addition to the cost factor for a new network, another reason why an F network is not to be expected.

Cellular communications for use with cell phones, smartphones, tablets, mobile routers, laptops, etc. are set up and operated by a few providers - but there are cellular communications contracts with a myriad of providers. These are in contract with the network operators and provide users of the mobile phone networks; mostly at a fraction of the prices of the providers, who have significantly more costs with setting up and maintaining the networks. In comparison, discount brands like those of the Drillisch Online AG Offer tariffs that are available from O2 would cost three to four times as much. However, the network operators themselves also have subsidiaries for discount offers: Vodafone has otelo, Telekom has congstar, Telefónica has blue ... and more.