Switching from Aperture to Lightroom - this is how the move works

After Apple announced that Aperture is no longer developed, many photographers are faced with the problem that they have to decide which horse you will bet on in the future. My recommendation is still Adobe Photoshop Lightroom, which is currently in version 5 and can be had for a little more than 100 EUR.

Switching from Apple's Aperture to Adobe Lightroom works with as little "pain" as possible.

I switched from Aperture to Lightroom a long time ago and was looking for a way to move my photos without learning the RAW settings, tags and meta data. Unfortunately, there is no 1: 1 move with an Aperture-to-Lightroom converter, but I would be happy to describe how to proceed to get the most important data.

I have Apple Aperture Version 3.5.1 and Adobe Photoshop Lightroom 5.5. For this reason, my information relates to menu items and functions that are contained in these versions of the programs. There may be small changes when working with other versions.

Instructions for exporting from Aperture

The menu item "Export" -> "Originals" opens an export dialog in which Aperture can specify how the data should be output. In this dialog I have set the folder structure to "year / month" because I also work with this setting in Lightroom. Of course, everyone can set this up as they see fit for their administration.

It is also important that in this dialog, with the option "Metadata", an output in an "IPTC4XMP sidecar file" is selected. I left the rest as it was. After clicking the "Export originals" button, Aperture will then save the photos accordingly. 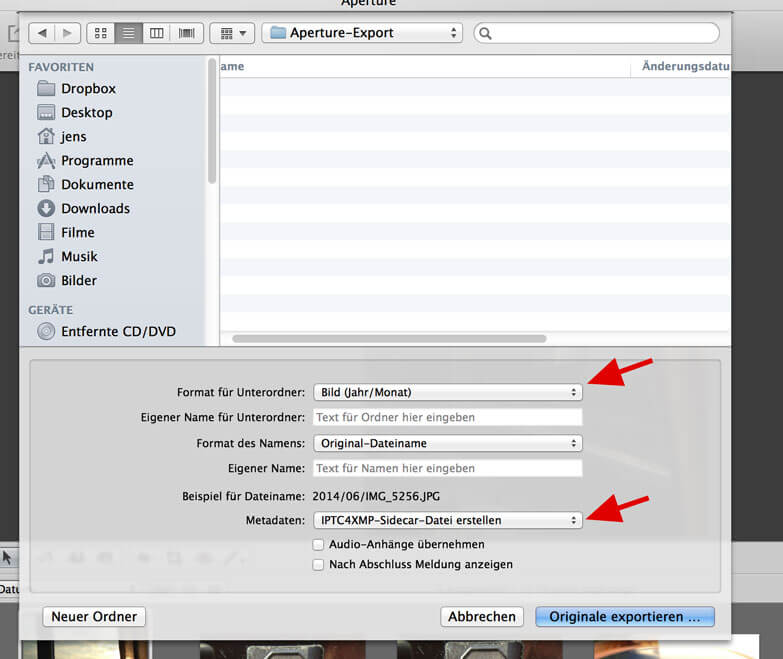 With these settings, Aperture will also export the photos with XMP metadata, so most of the data will be transferred to Lightroom after importing.

I have read that with older Aperture versions it is not possible to export folder structures that are deeper than one level. The users of these versions seem to have to make do by exporting the folders individually and thus circumvent the limit. In Aperture 3, everything happened in one step.

Instructions for importing into Lightroom 5

The next step is to import the data into Lightroom. The adjustments like the star rating, tags and simple edits like crops and rotations are taken from the XMP data. Just in case, I also exported the working copies as TIFF and also imported them into Lightroom so that I still have the finished photo available if Aperture is no longer supported by a future OS X.