Chess clock Jenga and other great lightning games with the iPhone 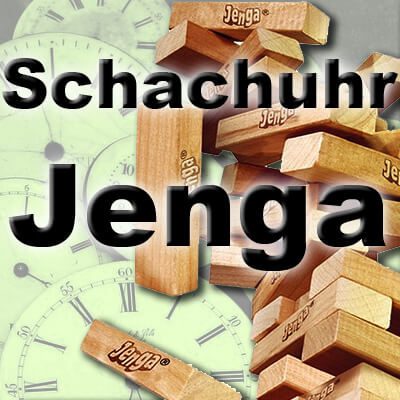 In the past, when you played games on the table instead of the tablet, games were like Jenga, The crazy labyrinth, Monopoly and the like in any household. If you still have a Jenga game or want to buy a board game, you can spice it up with a simple iPhone app: with a chess clock! Right, just combine a game like Jenga with a chess clock that counts down a certain time for the players and turns it into a blitz game: D

Chess clock Jenga - a fixed YouTube idea that you can imitate with a chess clock app for the iPhone and a Jenga tower. (Video: see below)

First of all, of course, you need a Jenga game. This is actually in every well-stocked household, possibly in the basement or in the attic. If you are looking for a new Jenga game for your student flat share or for the co-working space, then you will find it on Amazon. You order over Amazon Prime, then the stackable blocks will be with you quickly. By the way, there is a choice on the Amazon site the original game from Hasbro (Bestseller), a Rip-Off from Idena and cheap copy of Simba (temporarily offered as a plus product).

Download the right chess clock app for your iPhone

So, you have now bought the right Jenga game or at least ordered it once. Now you also need a chess clock. With this you set a certain time, which is then counted down for each player. If a player taps his field on the display, his timer stops and the opponent's timer continues to count down - and so on ... Just like a real chess clock. Here I have selected two chess clock apps for iOS, i.e. for iPhone and iPad:

More lightning games with the chess clock app on the iPhone

In addition to Jenga, you can of course also play other games with rounds on time. Do you gamble, for example Rummy, Mau Mau or other card games for two, then you can use the chess clock app to turn them into quick lightning games. You can find more games and other funny articles in the category Entertaining & funny of the Sir Apfelot blog;) Here is a video in which you can see the chess clock Jenga in action: