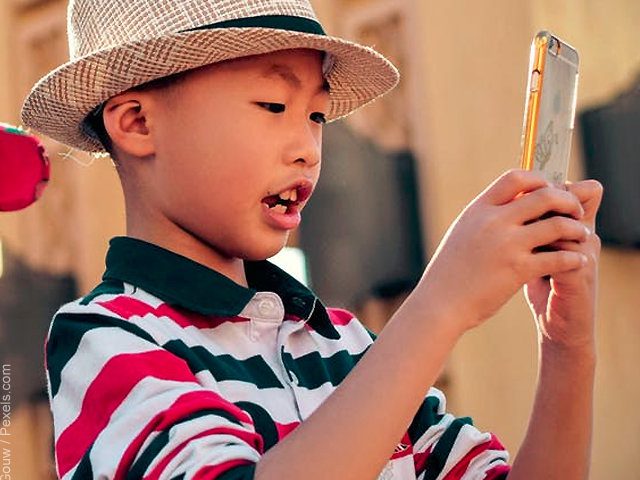 Smartphones for children: where are the limits? - This question will be asked in the episode of the report series “Jetzt mal ehrlich” broadcast on May 28, 2017 on ARD-alpha. You can watch the show in the BR media library watch again. In this article I have summarized a few views, data and facts from the documentation, added a few additions and also put together interesting links for you. A few food for thought on the topics of children and smartphones, media skills and general use of smartphones, tablets and the like.

Smartphones are not only omnipotent, but also and above all omnipresent. You can see the little all-rounders everywhere, in everyone's hands and sometimes on the ears of some people. According to the report from Bavaria mentioned above, there were 2009 million smartphone users in Germany in 6.

After only six years, in 2015, there were already 46 million smartphone users in Germany. There is really no one who doesn't know what a smartphone or tablet is. And it feels like there is no one from children to old people who does not have such a device. It is all the more important to familiarize yourself with the topic Children and smartphones to deal with.

Cell phone and media addiction in children and adolescents

Of course, adults are not immune from overuse of the technology, let alone addiction. However, smartphones have been part of everyday life for many children and young people as long as they can remember; or in other words: there is an early habit. The many contents and possibilities show a complex, brimming world full Discoveries, full of knowledge, but also full nonsense, Games and specific dangers. According to a self-assessment, according to the report, 8% of children between 8 and 14 describe themselves as at risk of addiction. Drifting into a parallel world and neglecting the real outside world is not excluded.

In the ARD-alpha report, a former cell phone addict is introduced who talks about his obsession with cell phones and smartphones. As you can see from his example, this does not have to result from constantly and constantly wanting to communicate with others and use social media. Rather, the devices and content can also serve as a substitute for social contacts; for example in the case of exclusion by their peers.

By the way, you can increase your own risk of addiction smartphone-addiction.de examine.

Inset - More posts worth reading in the blog:

There are various assessments and recommendations about digital time that children can and should be defended against on a daily basis. In the context of the mentioned report, these numbers are mentioned:

Children and smartphones: for or against

A statement that journalist Vivian Perkovic makes in the report is very important to me as the core of the matter: "Smartphone: yes or no - that's not the point at all, it's about whether we deal with it right or wrong. And especially our children.“- That means that there is no black or white, but above all the concentration on media skills and education. Children have to learn to try out the possibilities of smartphones, tablets, the Internet and the like to a limited extent and within limits. In addition, this should not be unlimited and unsupervised. The parents are, however, obliged to also have competence.

Because only those who are informed can have a say. Thus, content and activities on the smartphone are not devalued across the board, but more or less well-founded. In addition, there should be rules that give adults and children a certain level of security. Finally, of course, you should also be a role model and not hang on to digital media all the time. On the whole, it is not always necessary to look at what the children are doing exactly - but there should be an exchange.

By the way: According to the report, there are no internet rules in 51% of families (in Bavaria) that stipulate the use of the internet, permitted content, fixed times or the like.

Smartphones and cell phones in school

The smartphone can be seen as a disruption at school or used as a tool. In this way, the use of the devices can also be dosed and their use controlled. In some schools, smartphones are used openly, and they are even included in the classroom. Cell phones and smartphones are strictly forbidden in other schools.

Probably the number of those schools is greatest where something in between is the case: perhaps a ban, no real consequences in the event of a violation and minimal involvement in lessons or other offers. Many overburdened teachers do not want to deal with measures or with the integration of the devices in the classroom.

In the documentation the service Kahoot! presented as a possibility to use the smartphone to convey learning content. This also enables a faster knowledge check for teachers and students.

It is no secret that even children who cannot speak or even read or write properly are occupied with smartphones and tablets. And not just when there is a lack of alternatives, but regularly and for a long time. Most parents rely on apparently child-friendly content and learning measures.

learningApps but can at most convey content, but hardly any skills. First, they're not interactive enough to answer questions or improve pronunciation. Second, the only exist motor exercises from swiping and typing - and in the worst case, sitting or lying down with the same posture over a longer period of time.

If you want to know more, then the best thing to do is take a look Video in the BR media library at. There the editor-in-chief of CHIP also has his say, who only allows his children to use his own smartphone, but does not give them their own. Because giving the parent's mobile device is a reward, he says, while withdrawing the child's device is a punishment. Sounds logical.

There is even more information from the drug commissioner of the federal government, for example in the Presentation of the results of the 2017 BLIKK study. And one last link, which you are probably already familiar with through relevant campaigns: Look at! (What your child does with Media.)

Feel free to leave your thoughts and experiences on the topic as a comment;)