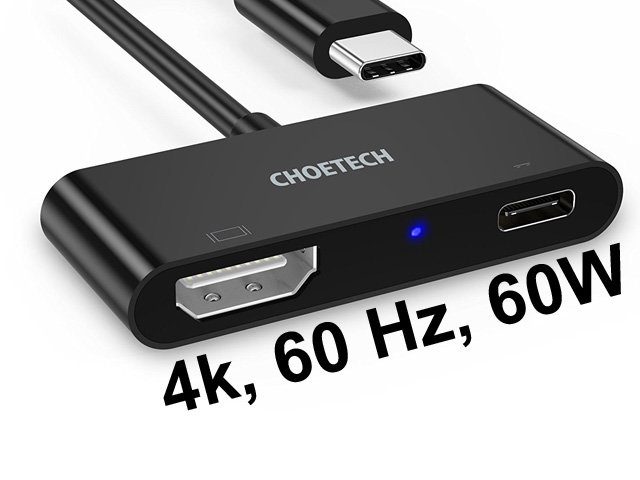 The Choetech USB-C to HDMI adapter offers video transmission while simultaneously charging the battery with a maximum of 60 watts. If you want to transfer films, series, games and videos from your Apple MacBook or Apple MacBook Pro to a monitor or television via HDMI in 4K resolution and at up to 60 Hz (60 fps), then the USB-C to HDMI adapter is the answer from Choetech ideal. The dongle supports the simultaneous use as HMDI output and power input - so the battery of the MacBook (Pro) lasts even in the series marathon;)

With the Choetech USB-C to HDMI adapter you can transfer films, series, games, videos, presentations and more, including sound in 4K at up to 60 Hz - and charge the Apple MacBook (Pro) at the same time.

This dongle is certainly not the cheapest for your Apple MacBook, but according to the satisfied customer reviews on Amazon, it may be the best. So far there have only been 5-star reviews in which the good transmission of VoD streaming, the transmission of presentations (from a smartphone) and the compact dimensions of the device were praised. It is also noted that the MacBook is “properly supplied with power”. (As of July 13, 2017)

Here I would like to show you a few more technical data of the Choetech USB-C to HDMI adapter, so that you can see immediately whether the dongle is something for your video and film transmission:

On the subject of 4K displays and 5K displays, Apple has a corresponding one Support article for you. If you want to know what is meant by 4K, UHD, QFH and Co., then I recommend you this guide to 4K. I gave you exact definitions, image examples, number of pixels and the difference to Full HD. If you have any questions or a comment about the described USB-C to HDMI adapter from Choetech, please leave a comment!