Clips 3.0 - Apple video app gets the most extensive update 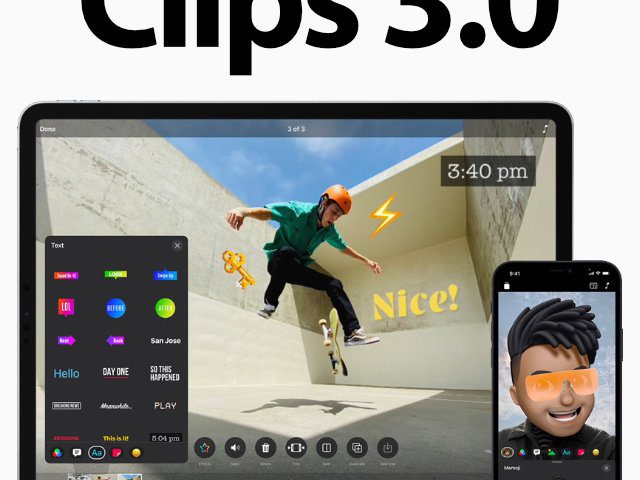 Apple's Clips app, which can be used to create and edit videos on iOS and iPadOS, has received its most extensive update to date. Clips 3.0 is designed to make video creation for sharing filmed content even easier. In addition to square videos in 1: 1 format, videos in 16: 9 portrait and landscape format as well as HDR recordings are now supported on the iPhone 12 (Pro). In this post you will find more details about the update of the app as well as the link to the official announcement from Apple.

The Clips app from Apple for the iPhone and iPad can now also handle HDR recordings, process 16: 9 in portrait and landscape format and so on. The most extensive update to version 3.0 so far!

Create and share videos using clips with no prior knowledge

Apple promises that with clips on the iPhone and iPad, videos can be cut together and provided with effects without prior knowledge or a long training period. In addition to video editing, image effects, color filters, stickers, your own drawings, text, emojis and much more can also be used. Whether privately or publicly via social media - the finished works of art can then be shared directly. I've also played around with clips on the iPhone a couple of times and think it's a nice app to spruce up and process videos on the Apple mobile device. You can find the free download in the official app store.

"Since its inception, Clips has become one of the most popular iOS video creation apps, and millions of projects are implemented with it every day. Users love how easy it is to create entertaining, expressive videos and share them with friends, family, and classmates with just a few taps on their iPhone or iPad"says Susan Prescott, Apple's vice president of Apps Product Marketing."Today's update, with a simplified user interface, support for portrait and landscape videos, HDR video recording with the new iPhone 12 and iPhone 12 Pro, and fun new effects, will let users create videos with clips that exude more personality and sophistication than ever before."

Clips 3.0 - Information, images and examples in the press release

Apple asked yesterday to update clips to version 3 issued a press release. It says, among other things, with a view to the frequent use of mobile phone videos: "With support for vertical and horizontal videos, Clips is perfect not only for creating stories for Instagram and Snapchat, but also for posting masterpieces in landscape mode on YouTube.“- The press release also contains further information, images and examples on how to use the free video app from Apple. In the penultimate paragraph there is a note on compatibility with HDR videos from iPhone 12 and iPhone 12 Pro as well as the output as Dolby Vision HDR file.