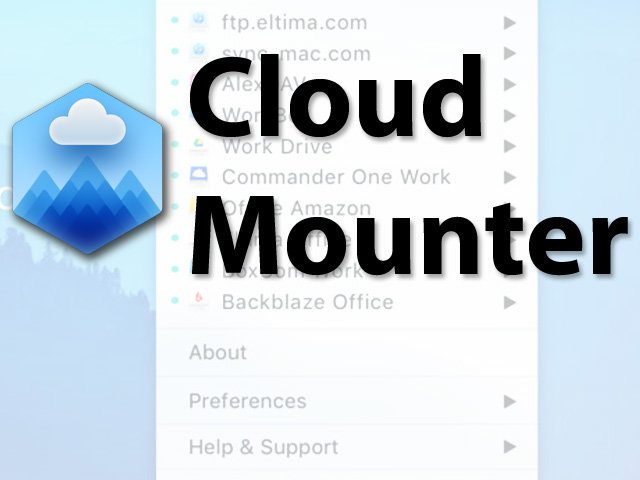 The macOS app CloudMounter is free software with which you can manage, encrypt and use your cloud storage with each other. Whether Google Drive, OneDrive, Dropbox, Backblaze, Amazon S3, Box.com, vBoxxCloud.com, Microsoft Cloud Germany (office.de), various FTP, FTPS, SFTP and WebDAV servers or other similar services: with the CloudMounter program you have everything at a glance, can use files in the Finder and even encrypt individual memories. In the following there is more information about the CloudMounter Mac app. 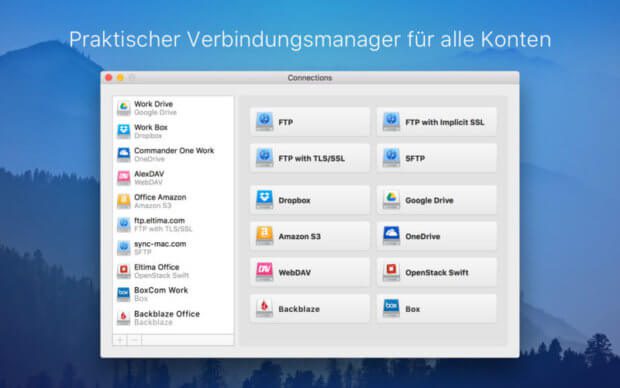 With the Mac app CloudMounter you can mount cloud storage as a drive and thus save local storage space. The decentralized files can be edited, exchanged and moved - directly in the macOS Finder.

If you are tired of having to call up each cloud service individually in the web browser or via the icon in the menu bar, then the CloudMounter app could help you. Because with it you can use the individual services as well as drives, such as an external hard drive. The tool also has a corresponding killer feature. B. Navigate through the Dropbox data like in a macOS folder and then edit it. The data is only loaded and synchronized for editing. This means that when the Dropbox is full and the MacBook has little space left, you can only load what is really needed with CloudMounter. The Dropbox effectively doesn't take up any more space on the computer. For many MacBook users who have small SSD storage, this is certainly an enormous savings potential.

You can download the CloudMounter app for the Apple Mac, iMac and MacBook at the Developer website Eltima. Or you can use the Mac App Store:

This is how the trans-cloud manager works

You will find extensive information on the function and use of CloudMounter in the app description on the iTunes page or in the Apple Mac App Store. Here is a description of the main functions of the program, which is free in the basic version:

Unlike native clients, CloudMounter doesn't sync local information with online accounts, it actually mounts remote servers on your Mac like a removable disk. You can copy, move, open, download or upload files to your cloud server, just like you would with your local folder [...] It is even possible to move files between cloud accounts without having to manually transfer them to a computer having to copy. Remember that temporary copies will still be saved on a computer, but will be deleted when the transfer is complete.

In addition to the free basic version, there is also a standard subscription of 3 months for $ 4,99, the economy subscription of one year for $ 14,99 or the full version for 30 euros. Now and then there are also offers and deals where the app is cut out for only 3 or 5 euros. So if you want the full version of CloudMounter, then waiting for a new discount campaign can be worthwhile.

Is the CloudMounter app not for you or do you often have to load larger amounts of data onto the hard drive despite the cloud storage being mounted, which threatens to overflow? Then the CleanMyMac app could prove useful. According to its name, it cleans up the hard drive of the Apple computer and thus creates space. A detailed test report on CleanMyMac you can find here.