The Puzzle Tsuro from last week was a game to my liking. How flexible the Apple team has to be to select the free app of the week can be seen in the choice for this week: Colossatron from Halfbrick studios (probably known to many from the classic "Fruit Ninja") is a game that requires relatively little thought. It lives mainly from the visual effects and the fun of breaking them.

The game Colossatron is mainly about destroying the world - this week for free! ;-)

The gameplay is a bit match-3, but without it being bad if something doesn't "match". You are flown into the world as a Colossatron and then you have to gradually destroy a number of cities. Colossatron itself is a snake into which you can click elements that are flying around on the playing field. The elements lengthen the queue, but they also automatically combine to form new colors or larger elements (if you place three of the same in a row).

The elements in Colossatron are usually weapons or extras such as protective shields, double fire, bombs or the like. You can simply pick up the weapons from the playing field during the game and insert them into the queue, which is thus getting longer and longer - if it weren't for the opponents who take you under fire and keep shooting elements out of the queue. 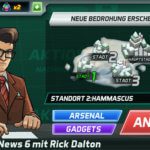 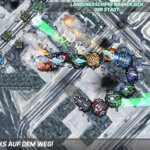 Is the snake quite small at first ... 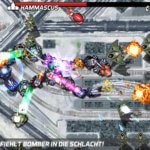 ... it becomes quite long towards the end.

Goal of the game

The goal is the complete destruction of the respective city. To do this, the Colossatron snake independently criss-crosses the landscape (or through buildings) and, meanwhile, shoots from all pipes. You focus on dragging and dropping the elements together and pimping the snake that way.

Towards the end there are usually boss fights in which you are particularly hard hit. Here it is worthwhile to detonate a bomb manually, for example, which you sometimes find on the way.

If you want to get an insight into the game, then I can recommend this trailer to you. Every now and then he shows what really happens in the game: namely how the snake crawls across the surface. Everything else is "advertising" that does not appear in the game itself.

In-app purchases - do you really have to?

Yes, you read that right. The game itself is free, but unfortunately there are numerous ways to get rid of real money in the game. For this you can buy in-game currency, for example, and then convert it into stronger weapons or permanent combat properties.

However, you can get along quite well without money. Between the individual cities there is a menu in which you can have your snake repaired. I did that once because I had so much money left in the in-game currency, but in the following levels I just didn't spend anything and still got on and on.

No question about it, the game is an eye-catcher. It flashes and lights up in all corners, but a game does not only live from the visual stimuli but also needs a captivating gameplay. And this is exactly where Colossatron is lacking. The snake controls itself, so to speak, and you just put the elements together. At the beginning it's still quite funny, because here and there there is an extra buried in the city that makes you happy, but the game couldn't captivate me for more than 15 minutes.

Maybe it's just not my type of game, but I would like to see a bit more influence on gameplay overall. I also don't know which weapons are for which purpose. While you don't really have control over what elements or weapon systems you find, what do you need six different weapon types for if you don't even know what they do exactly? An English commentator in App-Store appropriately wrote: "Nice and fun, but I have no idea what I am doing when I am playing this game!" :D That sums it up very well... 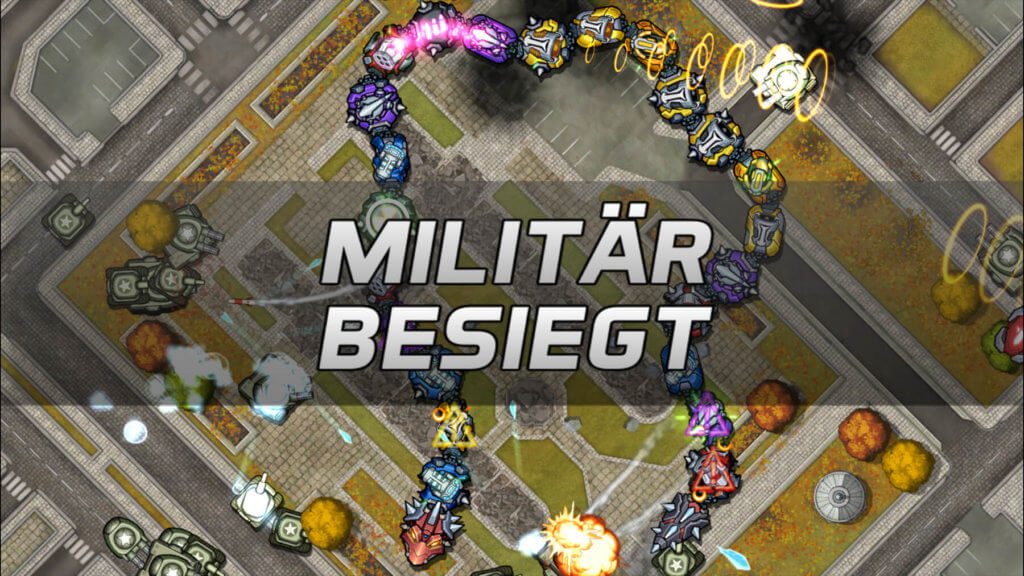 Defeated the military - this is how every level ends ... but you keep wondering how it came about. : D

Another point of criticism is that the game requires a really fast iPhone or iPad. In the app store you can read in the reviews of people with an iPhone 6 that at some point it will become virtually unplayable if the line is very long and fires from 1000 cannons. Even the graphics chip in the iPhone 6 seems to be overwhelmed here. Everything ran smoothly on my iPhone 7 Plus, but I generally prefer games that also work on older devices.

Last but not least, I find the in-app purchases just annoying. The games should cost a fixed price and then I would like to have some peace and quiet from such tailoring. If you don't even install such games, you should keep your hands off Colossatron right away. You can play it without in-app purchases, but you will still be confronted with it all the time.

If you still want to give the game a chance despite all the criticism, you will find it here in the app store.