Comparison: Fire TV Stick, Fire TV Box or Google Chromecast - who is ahead? 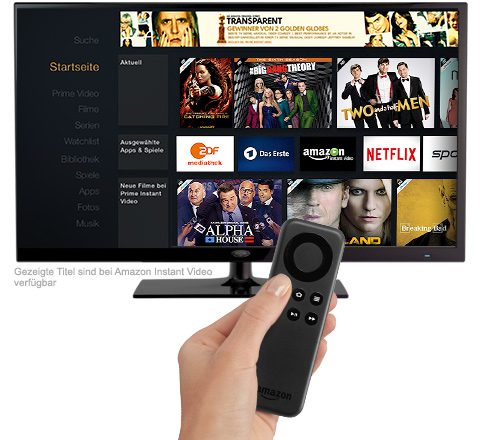 It has also been available to order in Germany for a few days - the Amazon Fire TV Stick, which will be delivered to German customers in the next few weeks (can be ordered here at Amazon). It's so small that it can be plugged directly into the TV's HDMI socket. Amazon is bringing an alternative to Google's Chromecast streaming stick onto the market (shortly after Google introduced a counterpart to the Fire TV with the Nexus Player) and of course a competitor for the Apple TV is in the starting blocks at a pretty good price. But I don't want to make a comparison to the ATV here.

What can the Amazon TV Stick do?

Basically, the stick is a slimmed-down version of the Fire TV box: Access to series and films from the in-house streaming service Prime Instant Video is just as possible as it is to the ARD and ZDF media libraries, the Netflix video service, the Spotify music platform and a few others. An extension of the stick via USB is not planned, so there is no possibility to connect a mouse or keyboard and use Android apps that are not adapted for the Fire TV. The stick also does not offer enough performance for performance-hungry gaming apps (such as 3D games). For whom is the stick worthwhile, and who should prefer the box?

The stick is really extremely handy and fits perfectly into even the smallest luggage. Its software is a little slower than that of the box, but that only shows in a direct comparison. The Fire TV surface and apps run smoothly, stick performance only falls behind the box when playing complex games and sideloading some apps. However, this is easy to get over with a saving of over 50%, the stick costs 39 EUR, the box 99 EUR.

The technical differences between box and stick

While a quad core processor works in the box, the stick "only" comes up with a dual core processor. Four 1,7 GHz CPU cores work in the box, the stick is equipped with two 1 GHz processors. The stick's VideoCore4 is integrated into the CPU, the box scores with a dedicated Qualcomm Adreno 320. The flash memory offers a pleasant 8GB in both variants, the 1GB RAM of the piece is only half the size of the box. Both devices work with W-LAN, the box can alternatively be operated via LAN. The optical audio output of the box is missing on the stick, as is the USB input.

If you really value voice control, you can buy a corresponding remote control for the stick separately - it is mandatory for the box, i.e. included in the scope of delivery. In the benchmarks, the box does significantly better than the stick (Geekbench Single Core: 654 to 304, Multi Core: 2053 to 559, AnTuTu: 30036 to 10527), but the stick's performance is definitely convincing.

Is the Google Chromecast an alternative?

The main difference, however, lies in the philosophy of the applications: the Chromecast gets its content from the connected device and is asked to pull the relevant material from the network and display it on the TV. The Fire TV Stick, on the other hand, not only offers internally stored apps, additional games can also be stored and played on the TV. If desired, a gamepad is also available for this. 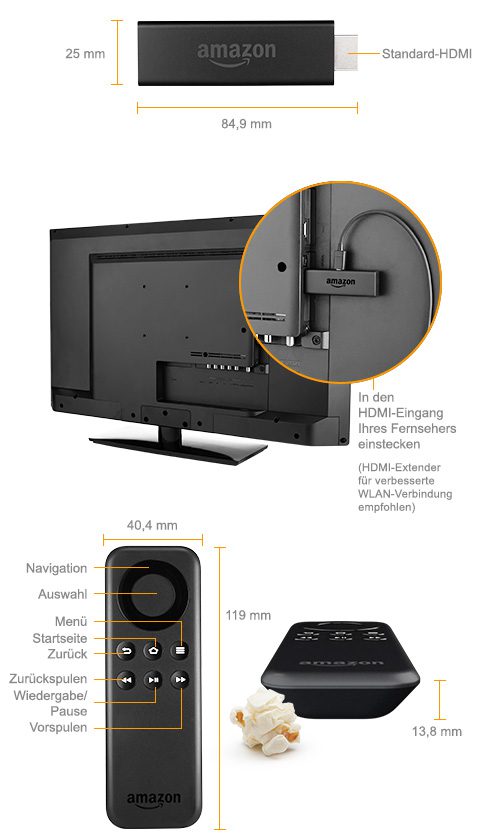 Conclusion: If you own the Fire TV Box, you don't necessarily need the stick, at least for use at home. However, if you want to access Amazon Instant Video and the other services while on the go, you can save a lot of pay-TV fees in hotels. Since the stick is an Android fork, you will look in vain for Google apps such as Play Music or Play Movies or a connection to the App Store. However, if you are satisfied with the Amazon services, the easy-to-use stick, whether as a second occupation for at home or as a practical tool for on the go, is well advised.

Products in this article

All products that were mentioned in this article can be viewed again here on Amazon or you can buy them there. Please research the prices directly on Amazon, because I can only name the prices that were current at the time I wrote the article: