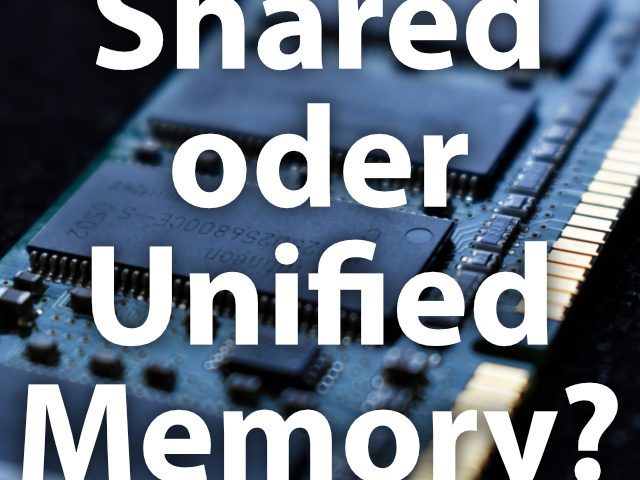 A so-called main memory is used when individual hardware components in a computer, smartphone, tablet or other device work together with processors and other components. This main memory, sometimes also called main memory or RAM (Random Access Memory), can either only be used by the main processor (CPU) or shared with the graphics card (GPU). If the CPU and GPU share the main memory, then one speaks of either shared memory or unified memory. What the difference is and where the individual advantages and disadvantages lie, I will explain to you in this guide.

What is the difference between shared memory and unified memory? What are the similarities and what are the advantages and disadvantages of the two technologies? In which Mac models do you find use. Here you will find answers to these and other questions.

I am well aware that there are several definitions and explanations for the term discussed here. This is due, among other things, to the special use in various areas of IT. So you can, according to the appropriate Wikipedia article, for example between shared memory in interprocess communication (IPC), in a multiprocessor system and with regard to graphics cards. This guide is about the latter. Because e.g. B. Intel graphics chips in Apple MacBooks use shared memory. The Apple Silicon (e.g. M1, M1 Pro, Max M1 and M1 Ultra) uses a shared memory (unified memory).

Shared memory is a (divided) divided working memory. A fixed part of the RAM capacity is reserved for the graphics unit. When using Intel graphics chips in many Mac, iMac and MacBook models (also with Pro or Air designations), these e.g. B. 1,5 GB made available. This ensures that no additional memory chip has to be operated and that the computer's graphics work is correspondingly energy-efficient. However, a disadvantage is that data must be copied from GPU memory for use in CPU memory. This is also the case with VRAM, but not with unified memory.

Let's move from shared storage to shared storage. The latter designation can be found in the German-language documentation for M1 chips from Apple. If you want to know whether it is shared or unified memory, you should switch to English. But you can believe me: it is unified memory. And here the special thing is that the entire RAM can be used by both the CPU and the GPU. The joint access also goes so far that the data is exchanged directly with each other and does not have to be copied first. So while shared memory is a granny flat, unified memory represents a shared household.

VRAM – memory cards with their own memory

However, the two models shown for the main processor and graphics memory are not the only ones. Let's just think about gaming computers. Graphics cards with their own graphics memory, the so-called VRAM, are used. Of course, it is also necessary here to first copy the calculated data and download it to the CPU for integration into the entire computer, system and app usage. However, by installing a better graphics card, the VRAM can be expanded and used more efficiently. The RAM can also be increased without affecting other elements. What electricity efficiency, data exchange and Co. look like then depends on the exact technology.

Have I forgotten anything else? Do you have any additions or other comments? Then feel free to leave a comment on the topic!