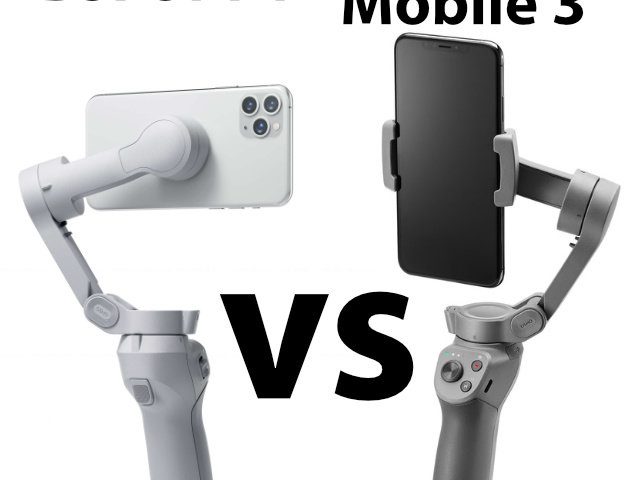 With the OM 4, DJI yesterday launched the latest generation of the handheld gimbal "Osmo Mobile" for smartphones. But how does it compare to its predecessor? Are there any significant improvements over the DJI Osmo Mobile 3? In the following I have compared both devices. Which is your favorite? Let me know with a comment below this post;)

In the comparison DJI OM 4 vs DJI Osmo Mobile 3, there are small but noticeable points that speak for the new smartphone gimbal from 2020. Especially the magnetic holder for iPhone and Android devices.

This is the DJI OM 4 handheld gimbal

If you want to get extensive information about the new DJI OM 4, then I recommend you the article linked here. In it I have summarized the technical data, pictures of the product, test and review statements and much more. When the DJI Osmo Mobile 3 came out a year ago, I also published an extra article with important data and information. You can find this one with this link.

As an introduction to the comparative consideration of the two models, it should only be said at this point that the new version offers a smarter holder, is designed for new recording modes and has the standing aid already in the scope of delivery. In addition, according to test reports, it should not run as hot as its predecessor after prolonged use. So there are a few plus points for the newcomer even before a more detailed examination.

At first glance, of course, it is noticeable that the functional design has changed. Instead of a fixed clamp into which the smartphone is clamped, there is now a magnet technology. This ensures that the iPhone or Android phone can be installed and removed more quickly. So if you want to make a phone call, write a message or check incoming notifications, you don't have to open a clamp first and then put the smartphone back in - just remove it and plug it in again is the motto of the DJI OM 4.

The DJI OM 4 is more user-friendly compared to the DJI Osmo Mobile 3 because it uses a magnetic holder instead of a fixed clamp. The tripod is also included in the scope of delivery.

Apart from the new bracket, there are only minor changes in the technical data. It is noticeable that the battery capacity and the battery life have remained the same. In the table below you will find the most important data in comparison.

The 3-axis gimbal has stayed the same

As DJI itself shows in its information material, the 3-axis gimbal, which takes over the image stabilization, has remained the same. The same technology is used in the DJI OM 4 as in the DJI Osmo Mobile 3 to stabilize handheld videos. Ergo, if you only want to use this function, the new purchase will not do you much good. However, if you don't have an Osmo Mobile 3 yet, I would recommend the OM 4 directly, as this costs almost 40 euros more, but already includes the tripod handle (costs 19 euros separately) and compatibility with new app functions. Overall, the price difference balances out.

When comparing the DJI OM 4 vs DJI Osmo Mobile 3, there are no differences that are too large, but nevertheless significant. Although the gimbal itself has remained the same, the magnet attachment offers more freedom of use. In addition, a handle stand is already included in the scope of delivery, so that this does not have to be bought later. If you offset this, there is only a price difference of 19 euros - and this is basically offset by the change from the fixed clamp to the magnet alternative. The DJI OM 4 gimbal for the smartphone is not only more user-friendly, but also plays in the same price range as its predecessor.

Which DJI Smartphone Gimbal Should You Buy?

So which video stabilizer from DJI should you choose? Both have the same gimbal technology and also use the same app. The battery capacity and the battery life are also the same. However, the DJI OM 4 gimbal is more user-friendly to use. The tripod handle, which costs 19 euros separately, is also included.