Comparison of iPhone 13 Pro and iPhone 12 Pro - which is different?

Before we get to the explanation of the differences, I would like to briefly mention which specs have remained the same or have remained almost the same:

This gives you a rough idea of ​​where, in principle, there are no major changes. From a purely visual point of view, the iPhone 12 Pro can hardly be distinguished from the new iPhone 13 Pro - if you are not an expert and recognize the larger camera module of the iPhone 13 Pro. 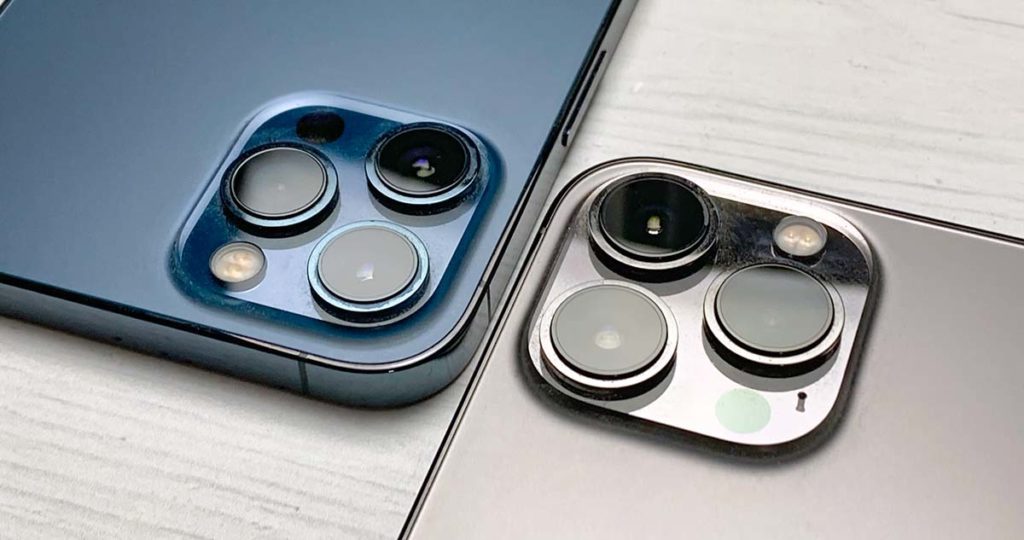 Changes to the iPhone camera

For me, the improvements in the camera are usually the number one argument when it comes to buying a new iPhone.

The iPhone 13 Pro now has a nice feature, which is probably mainly realized by the software support of iOS 15: Each of the four iPhone cameras (including the selfie camera) now support night mode and can take good pictures even in difficult lighting conditions.

The best result is usually achieved with the wide angle, as it has the lowest f-number. But the ultra-wide angle also delivers good night shots, as it captures more light overall and brings it to the sensor due to the larger angle. However, with the ultra-wide angle you always have slight perspective distortions and edge blurring, which I don't like that much in many photos. 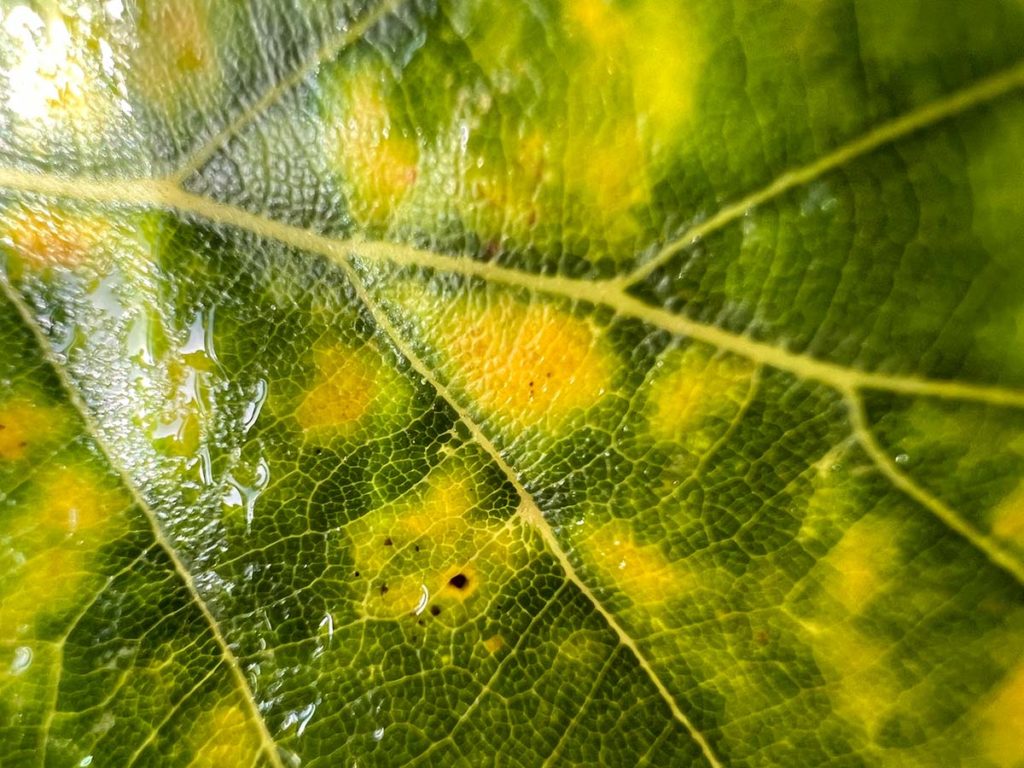 At the edges, the ultra-wide-angle lens of the iPhone causes blurring of both the 12 Pro and the iPhone 13 Pro, which is why I prefer the wide-angle (without Ultra) for macro shots.

Furthermore, the iPhone 13 Pro has a larger sensor and larger lens systems, which means that even more details can be captured in night shots and the image noise is significantly lower compared to the iPhone 12 Pro.

But even in daylight, the better camera modules show higher dynamics, which is advantageous if you have pitch-dark and light areas in a subject. However, it is difficult to say what will ultimately be solved by the software and what will improve the hardware.

However, the fact is that with the standard lens (the wide angle) the size of the pixels on the sensor has almost doubled. It is clear that this results in less image noise and a greater dynamic range in the images.

Tele zoom with longer focal length in the iPhone 13 Pro

Another change can be found in the telephoto lens. The iPhone 12 Pro still had a 56 mm telephoto, while the iPhone 13 Pro now has 77 mm. For iPhone photography, this means that distant objects can be zoomed in even more. But the telephoto is not only interesting for landscape photography, because the focal length is also ideal for portrait photography.

When it comes to lenses for portrait photography, the rule is that 85mm lenses are an optimal choice. With the 77 mm, Apple is certainly not damn close by chance. 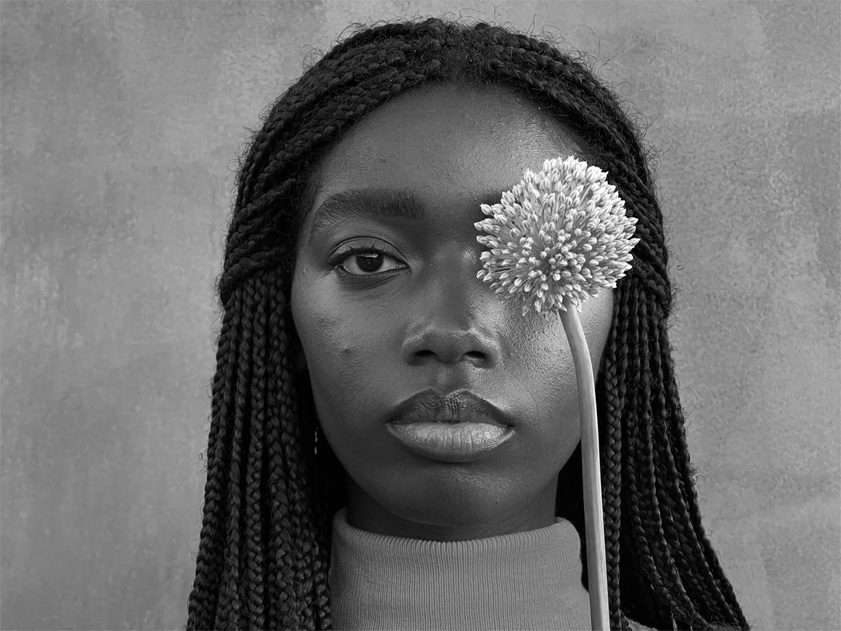 With a focal length of 13 mm, the iPhone 77 Pro is very suitable for portrait photography (Photo: Apple).

Greater bokeh effect thanks to a longer focal length

Actually, the bokeh effect on the iPhone camera is included in the software. That means, in principle, it doesn't matter which lens you snap with.

Due to the better bokeh, which the hardware of the iPhone 13 Pro already provides, the error rate of the recalculations for the bokeh effect is significantly lower. You can tell by the fact that less and less areas are blurred that actually belong to the person you want to be sharply focused. 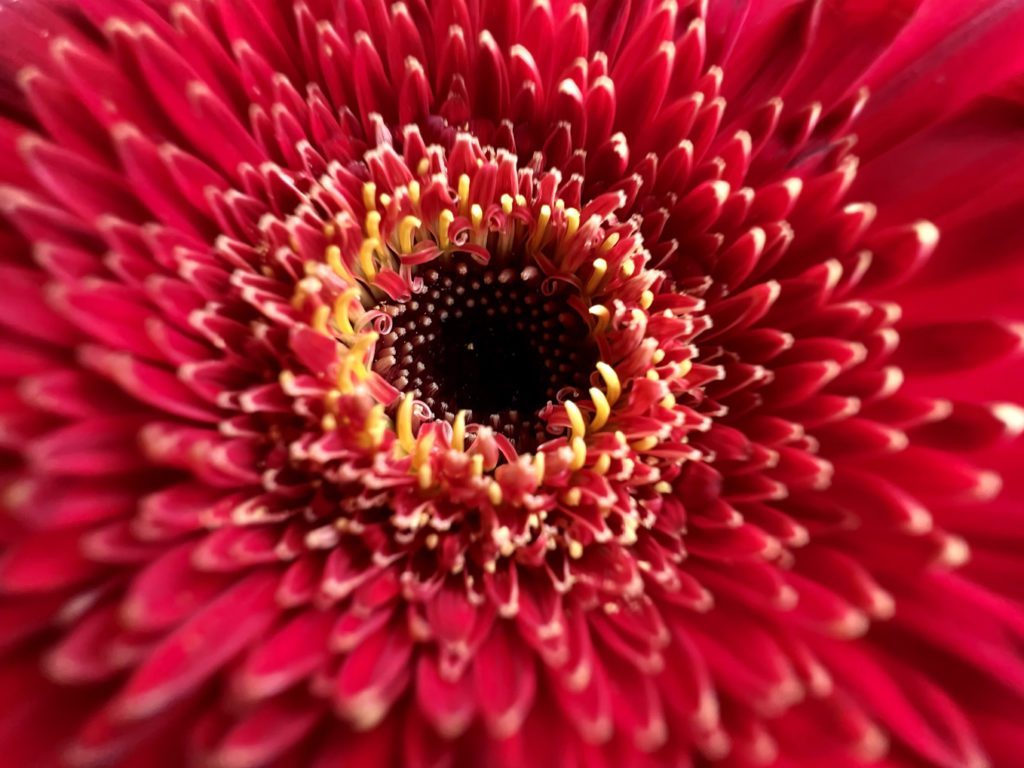 With the iPhone 13 Pro you can finally get really close to the subject - a reason for me to switch to the new model (Photo: Apple).

I think the two features should be mentioned together as they go hand in hand. The iPhone 12 Pro still has a fixed focus in the ultra-wide angle. This is not a problem if you are taking pictures of landscapes or subjects that are all further away.

However, if you come into the focus area of ​​a few centimeters, the ultra-wide angle in the iPhone 12 Pro does not deliver any intoxicating photos. Because it could only be brought into focus by the distance to the subject.

With the autofocus in the iPhone 13 Pro, this has been significantly improved and at the same time a Macro mode integrated, which for the first time allows to photograph subjects that are only a few centimeters away from the iPhone. For me, macro mode was the reason I got the iPhone 13 Pro Max this year.

With the ultra-wide angle, the aperture has also increased from f2,4 (iPhone 12 Pro) to f1,8, which allows even more soft focus in the background for macro shots. 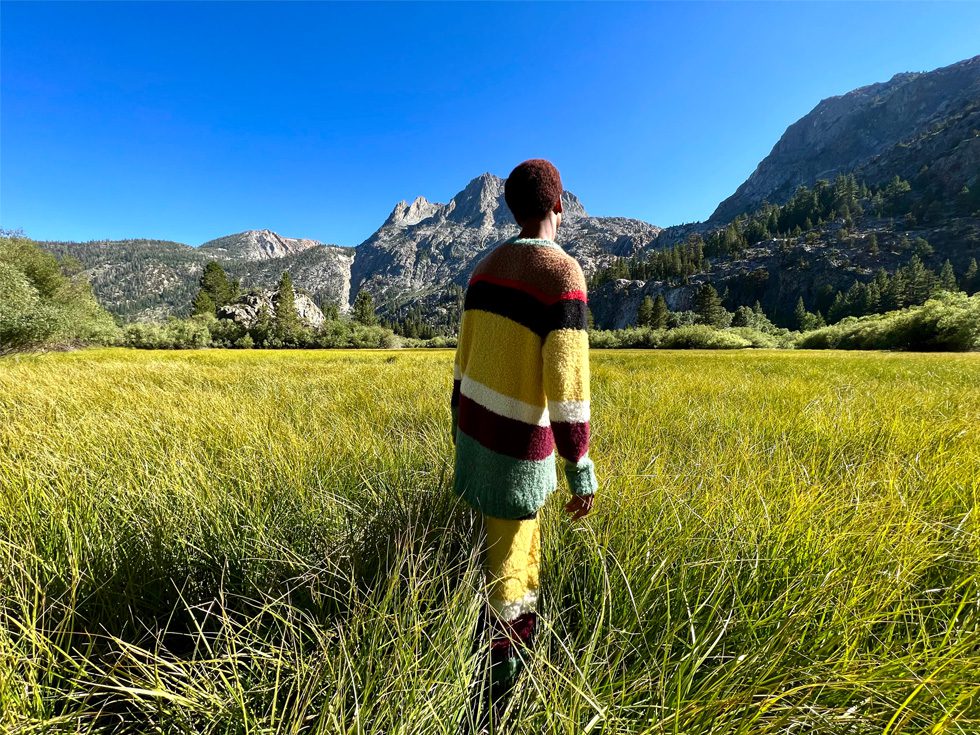 Smart HDR4 and Deep Fusion ensure that the dynamic of the photo is even better with the iPhone 13 Pro. Even the shady area of ​​the sweater is not flooded, but clearly structured (Photo: Apple).

Smart HDR3 was already quite good in the iPhone 12 Pro when it comes to photos with high brightness contrasts in an image. With Smart HDR4, Apple has raised the bar even higher here. The results that I get with the iPhone 13 Pro are visibly nicer and also look much more natural.

What is also noticeable is the naturalness of the night shots. While the iPhone 11 Pro and 12 Pro still looked like there was a bright light source somewhere that illuminates the scenery, the recordings of the iPhone 13 Pro actually look like recordings in the insulation, which still show many details. The mood in the photo comes back a little. 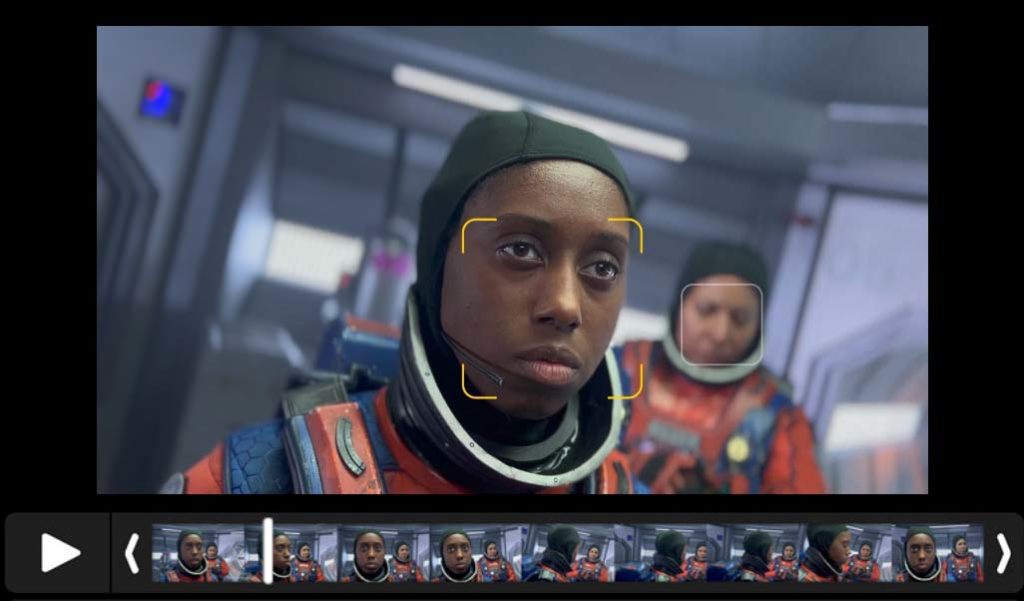 In cinema mode, changes to the sharpness in the video can be made afterwards. You probably know the effect from one or the other film (source: Apple).

Cinema mode for films with the iPhone 13 Pro

The cinema mode is definitely still in the beta phase. Currently you can only record films in cinema mode with 1080p and 30 Hz, which will certainly not be the last version.

With the portrait mode it was already the case in 2017 that this could be used in a kind of beta phase in the iPhone. However, the first results were still quite weak and the portrait photos only got better and better in the course of iOS development.

What does the cinema mode do? In principle, you record a film in cinema mode and then later say in post-production how the sharpness should be. For example, you can slowly move the focus from an object in the foreground to an object in the background, which gives a nice effect and “draws” the viewer's attention. 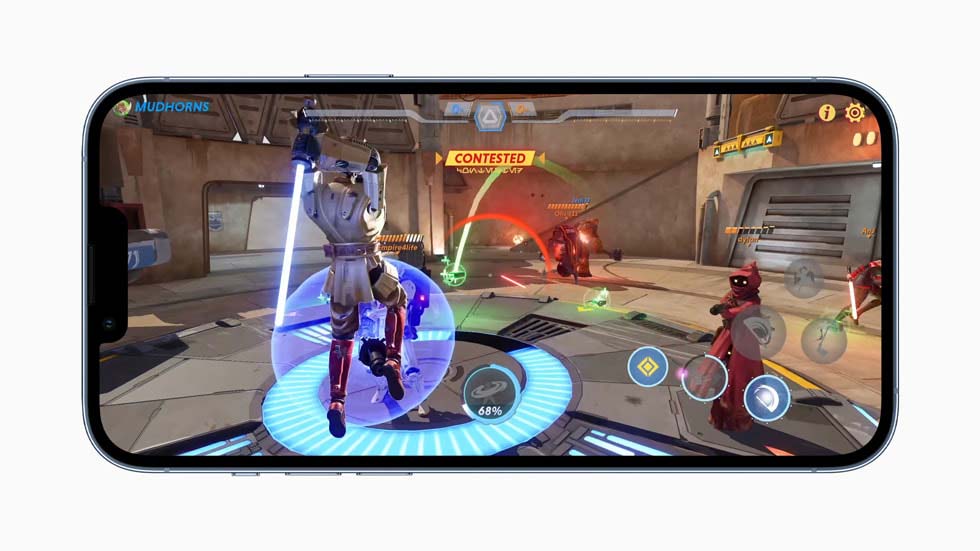 The ProMotion display of the iPhone 13 Pro is not only good for gamers, because scrolling on websites or in the photo library is much smoother thanks to the high frame rate (Photo: Apple).

This feature was long expected in the iPhone and was already known from the iPad Pro, but has now finally found its way with the iPhone 13 Pro: the ProMotion display. This automatically increases the refresh rate in steps of up to 120 Hz and thus ensures particularly smooth scrolling and flowing animations on the iPhone.

The special trick on the ProMotion is that the frame rate is adapted to the screen content. If you look at a static website that you are currently reading, the frequency is automatically reduced, which saves the battery. When playing games, fast scrolling or other brisk movements on the screen, the iPhone sets the frame rate up to 120 Hz.

Apple A14 Bionic vs Apple A15 Bionic

This difference is minimally noticeable in everyday life, but it wouldn't be a reason for me to buy a new iPhone. The iPhone 12 Pro is extremely fast and doesn't really need any acceleration.

What is one reason for faster processors, however, are iOS features such as cinema mode when filming. Here, the image analyzes in real time ensure a high demand for computing power.

The Geekbench values ​​show that the A5 chip in the iPhone 13 Pro is slightly better in the multi-core area than the A14 in the iPhone 12 Pro - but there is not very much difference.

I have to admit, since the iPhone 12 Pro Max I haven't had a day on which the battery was empty. With the iPhone 13 Pro, Apple has improved this again and now states the battery life as follows:

Recommended reading: Battery capacities of all iPhone models in comparison

So you can see how good the battery life actually is: I use the iPhone 13 Pro Max and sometimes I don't charge the device in the evening. Then I use it another day and in the evening it still has over 50 percent battery.

Now you might think that I might not use it much, but in fact I take photos, research topics, read e-mails and messages, play something here and there and still the thing cannot be empty. I think I can easily use it for 3 days without charging and the battery level is still around 20 to 30%.

iPhone 13 Pro with a smaller notch

Thanks to the MacBook Pro, the notch is once again a difficult topic of discussion. For me, the little stripe is something that I got used to relatively quickly. Nevertheless, I was surprised that there was a difference here too, because the iPhone 13 Pro has a smaller version of the notch compared to the iPhone 12 Pro (source: Telekom).

In principle, the biggest changes can be found in the area of ​​the camera. If you really want the macro mode, you have to use the iPhone 13 Pro right now. And those who take a lot of photos and currently still have an iPhone X or iPhone 11 Pro will also be enthusiastic about the better camera quality.

However, if you already own an iPhone 12 Pro, you will only notice minimal improvement in the area of ​​photo and film recordings. Here it is more advisable to save the money and to choose the widespread 2-year cycle, in which you swap your iPhone for a new one.