Although the Joy-Cons and the Pro Controller can be connected wirelessly to the Nintendo Switch, the Bluetooth module is not open for headphones. If you have headsets with a long USB or jack cable, that's okay. But what if you'd rather use a wireless headset? Here I will show you how you can connect Bluetooth headphones to the Nintendo Switch (Lite). An adapter for USB-A or USB-C connections is required. There are even special models for the Nintendo console to establish a connection with two output devices at the same time.

Update 15.09.2021: With the new firmware 13.0.0, the Nintendo Switch brings native support for Bluetooth audio. An adapter is no longer required for coupling with wireless headphones or speakers. Update end

Do you want to connect your Bluetooth headphones to the Nintendo Switch (also Lite)? Then you need an adapter with aptX LL Codec so that you can enjoy the video game audio wirelessly without lag.

In the following I will show you two adapters. The first Bluetooth adapter for the Nintendo Switch console is a USB-C model. You can use this in the handheld mode of the hybrid model from 2017. It can be connected to the TV dock with a USB-C to USB-A adapter (buy here) connect. Alternatively, you can buy a Bluetooth adapter with USB-A for TV mode, which you plug into the switch dock. The first handheld adapter comes from HomeSpot; the second for TV operation comes from CREATIVE. 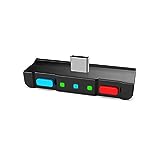 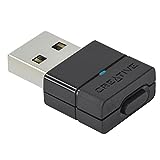 The Nintendo Switch Lite from 2019 also has a USB-C port on the bottom, but the recesses for the mounts in the dock are missing. Because of this structural difference, the HomeSpot model shown above does not fit the small version of the video game console. That's why you should get the Alternative from HOUSON that not only fits easily to all USB-C ports (consoles, PC, Mac, etc.), but also includes an adapter for USB-A ports. So it's also a cheap alternative to the HomeSpot adapter above. 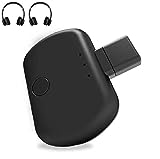 Recommendation: Bluetooth headphones with aptX LL for the Nintendo Switch

If you want to connect Bluetooth headphones to the Nintendo Switch (Lite), then it should be models that use aptX LL (Low Latency). Just like the adapters shown above, they should support the codec so that there is no lag, i.e. an asynchronous shift of picture and sound. That takes the fun out of the game and basically makes video games unplayable. What is behind aptX and other codec abbreviations in the audio and radio sector, I have summarized for you here: Bluetooth aptX, aptX HD, aptX LL and LDAC - what do these abbreviations mean?