An SD card is an elementary part of the Raspberry Pi, a kind of minicomputer for mobile applications or hobby projects in computing, programming and gaming. The memory card replaces the hard drive and contains, among other things, the so-called bootloader, which is responsible for booting and starting the Rasp Pi. As you probably know, there is one thing to do with the selection of SD cards different classes, speeds and bus assignments. Therefore the question arises: Which is the right SD card for the Raspberry Pi? Here are a few suggestions.

Which SD card for the Raspberry Pi or which microSD for the Rasp Pi is the right / best? Here are recommendations and official NOOBS cards as storage and boot drives in the minicomputer.

Which SD card for the Raspberry Pi?

Several factors play a role in the selection of the right memory card for the Rasp Pi. On the one hand the version of the minicomputer - i.e. Raspberry Pi 1, Raspberry Pi 2 and Raspberry Pi 3 and their sub-models - and on the other hand the specifications of the memory cards. Here you should buy at least a Class 10 SD card or Class 10 microSD, as this enables a data exchange of at least 10 Mbit / s. If you pay attention to the UHS bus, UHS I (Roman 1) is basically sufficient. The Roman numeral of I, usually in a U, indicates that up to 50 Mbit / s is possible with a minimum write speed of 10 Mbit / s.

Furthermore, when choosing the right SD card or microSD for the Raspberry Pi HC memory cards are recommended, i.e. SDHC and microSDHC cards. SDHC or SD 2.0 stands for "High Capacity" and describes cards that have up to 32 GB of memory and the write and read speeds required to manage the memory. An even bigger replacement for the hard disk in the Raspberry Pi are SDXC cards (SD 3.0), which as "SD eXtended Capacity" can have up to 2.048 GB, i.e. 2 TB. Depending on the operating system you want to boot on the Rasp Pi, 4 to 8 GB are enough. So SDHC and microSDHC are ideal.

Memory cards for Raspberry Pi 1 A and B

A regular SD memory card is 32 mm long and 24 mm wide; and that is also the format that is provided for in the A and B versions of the Rasp Pi 1. One should keep this in mind when buying - and perhaps also that certain brands offer better shelf life than others. From experience, I therefore tend to recommend SanDisk products in the following. So far, I have not had any problems with the manufacturer even when using many write cycles, which is also important with the Raspberry Pi. Therefore, in my opinion, these are the suitable SD cards for the Raspberry Pi 1 A and B: 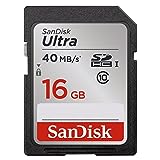 Of course, the makers of the Raspberry Pi also have memory cards specially recommended or licensed for use with minicomputers. The so-called NOOBS microSD (NOOBS stands for New-Out-Of-Box-Software) is a 16 GB / 32 GB microSDHC card from SanDisk with an adapter on which the Raspberry Pi logo is printed. In short: the official recommendation for preparing the memory of the pocket computer comes from the manufacturer SanDisk:

NOOBS memory card with 16GB
The official NOOBS microSDHC memory card with UHS I / U1 and 16 GB of storage space for the operating system, files, software, drivers and more. Including adapter for use as SD.
12,16 EUR
Buy it at Amazon Price includes VAT, plus shipping costs (updated: 12.01.2022 at 00: 36 clock)

The newer and current versions of the Rasp Pi are compatible with the smallest memory cards, which are mostly used in Android smartphones, cameras and other devices and have a width of 11 mm and a length of 15 mm. In short: they are microSD or microSDHC memory cards. In addition to the special NOOBS card with operating system (see above), you can also use these empty micros for the very individual configuration or the use of a different OS:

microSDHC with 8GB capacity
Suitable microSDHC card for the current models of the RasPi with 8 GB for OS and other software / files / data.
Buy it at Amazon Price includes VAT, plus shipping costs (updated: 12.01.2022 at 00: 36 clock)

microSDHC with 16GB capacity
This microSDHC is also fast and durable. The capacity of 16 GB offers a lot of potential for exciting projects.
23,62 EUR
Buy it at Amazon Price includes VAT, plus shipping costs (updated: 12.01.2022 at 00: 36 clock)

Here I have put together a few questions and answers about the replacement hard drive in the minicomputer. This is how you should prevent or fix problems and continue to work successfully on your project: