Archiving of data: Which data carriers for data backup? 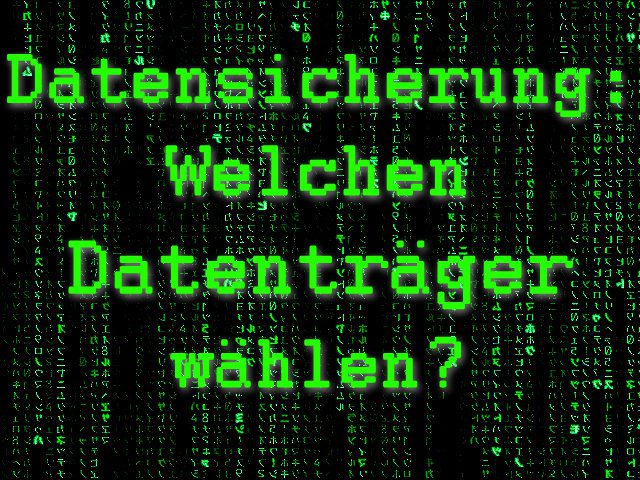 You can back up data and files on the hard drive, a CD, DVD or Blu-Ray, on a memory card, a USB stick, etc. The question that arises here is: which data carrier is best for backing up data? What are the advantages and disadvantages of data DVDs, USB sticks and external hard drives when archiving data? How do you store the data carriers in a safe and durable way? 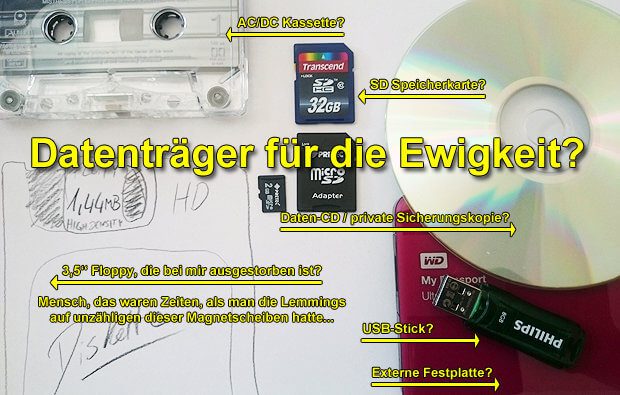 Data backup is possible on many media. You can see how long these will last with good storage in the table of this guide;)

Do you know that: You dream in binary code and suddenly there is a two !? Should this nightmare come true, then it is better if the compromised data is backed up on another data carrier. Many nowadays use external hard drives and USB sticks. Sure, it's quick and doesn't cost much in the long run.

The situation is similar with the cloud, i.e. countless external hard drives from a storage service provider. Data DVDs and CDs will certainly still be burned, even if not as often (Apple is also saving the corresponding hardware with the MacBooks). Floppy disks ... what's that again? Cassettes and magnetic tapes ... huh?

BR shipment: “Fascination of knowledge” on the subject of storage media

There are different storage media such as hard drives (HDD and SSD), Memory cards, USB sticks, DVDs, CDs, the cloud and more - but how long does which data carrier last? And under what circumstances does the data carrier really last that long? Here is a table that shows my research results (the maximum values ​​are "save to say" information; of course, some models can also last longer - but I would not vouch for that):

So, when it comes to storing data carriers, one can say: Store in a cool and dry place, protected against dust, water, knocks and stitches and away from magnetic fields.

Update and copy over and over again

Not far from Freiburg im Breisgau is the so-called Barbarastollen, a disused clearing tunnel for ores and silver. Today he serves as "Central recovery location of the Federal Republic of Germany“, Because around 30.000 kilometers of microfilm are stored in it in airtight and dust-tight stainless steel bins. For private users, you and me and so on, such a data backup would be rather cumbersome - and out of date.

It is therefore important to use modern solutions and transfer backed up data to new storage media after a while. If only because, along with the media, reading devices are also becoming extinct. So if you still store something on floppy disks or cassettes, you should think about USB sticks and DVDs;)

How do you save?

Which backup methods, which storage media do you trust; and why? Feel free to leave a comment! :) AND ATTENTION: Old data on new USB sticks!