Digital board games for Christmas, New Years and all year round 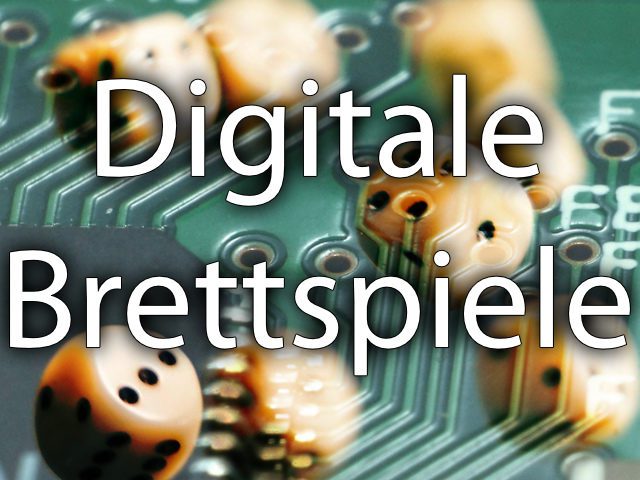 The Sundays in Advent, Christmas and the time “between the years”, all of this invites you to play board games together. If you have the physical get-together this year because of Corona, you don't have to do without it. Because there are numerous digital board games or board game classics available as apps. Alone, in local two-player or multiplayer mode, or together over the Internet, you can relax and have fun with various games. In the following I will introduce you to software for the Apple Mac, the Apple iPad, the Windows PC and the Nintendo Nintendo Switch.

Digital board games for Christmas, New Years and all year round. You can find board game apps for Mac, iPad, Nintendo Switch and Windows PC with this guide.

Play board games on your Mac

When you think of board games on the Apple Mac, the first thing that surely comes to your mind is a real classic: chess. Where Windows comes with card games like Solitaire by default, macOS offers chess as a pre-installed game. The quickest way to find it is to enter “chess” in the spotlight search (magnifying glass in the menu bar or key combination cmd + space bar). 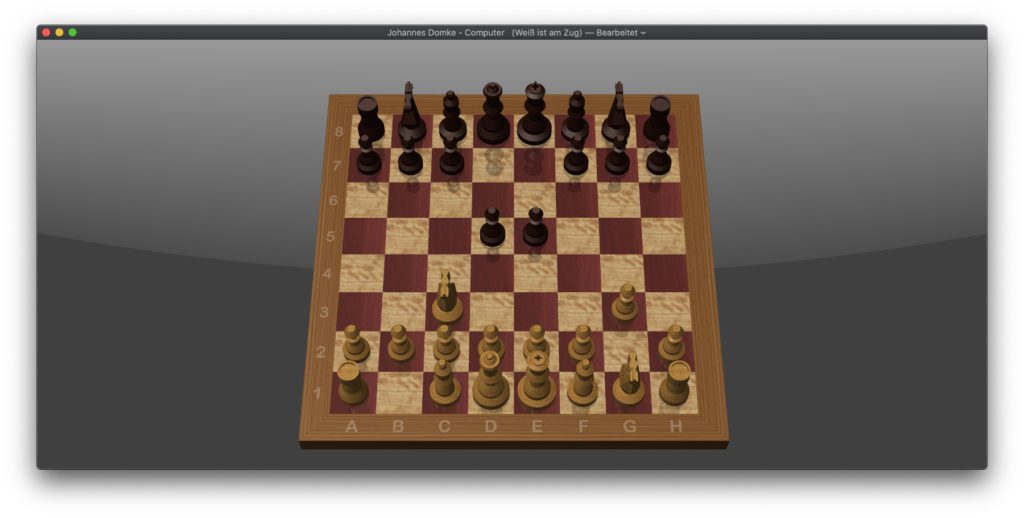 You can find more board games and other video games for macOS on the Apple Mac in the official Mac App Store. Just start the app and search either in general for "board game" or for certain titles: Backgammon, Mill, Mahjong, Connect Four, Go, Billiards or Pool, Dominoes, and many more. Some are free, others are free as a test version and some are only available in the paid full version. However, the prices are often in the single digits.

Play board games on the iPad (and iPhone)

The iPhone with the comparatively small display is not the best device, especially when playing in pairs on one device or online for a longer period of time. That is why I am highlighting the iPad at this point. Here, too, you can search for specific titles or an overview for board games directly in the App Store. What you can also use as an aid is this category overview on the App Store website. There are titles from the search path App Store > Games > board Games listed.

Steam is probably the most widely used platform for buying and downloading video games on Windows PCs. Anyone who knows a little about it will directly become the Tabletop simulator have in mind. This game environment, which is also available for VR, gives players the opportunity to design their own gaming tables or to use pre-designed ones. From card games and dominoes to chess and Go to racing games and even pen-and-paper (PnP), everything can be implemented. You can even define your own physics in the 3D environment. I use the game for a PnP round with voice chat via Discord: D 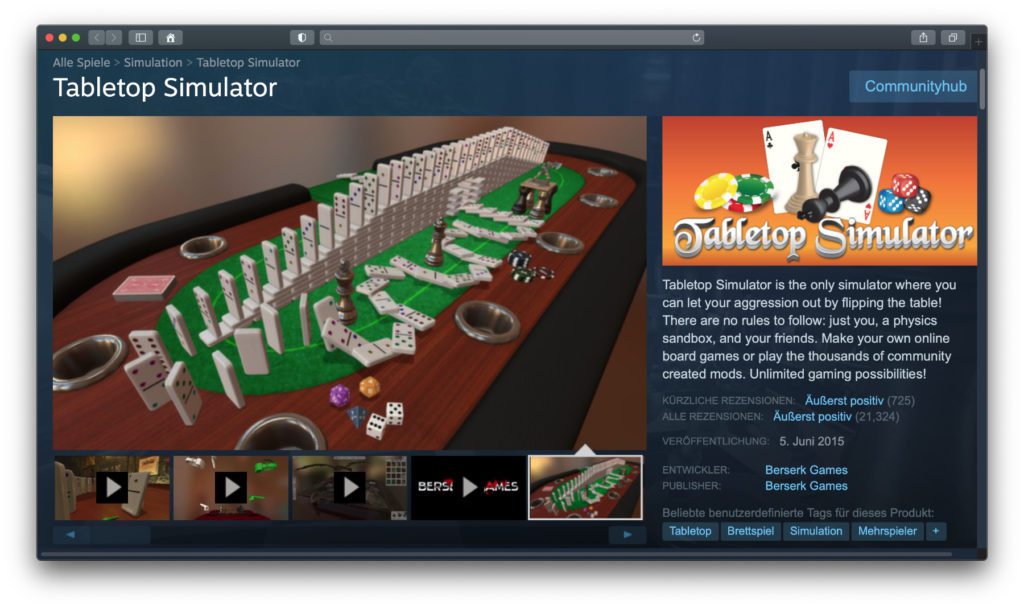 But maybe you don't want to spend € 19,99 (or € 54,99 in a pack of four) on the game, nor do you want to deal with the settings and design options. If you just want to play a finished game, you will also find it on Steam - for example with these titles: Monopoly, The Settlers of Catan, UNO, Cluedo, Chess, The Game of Life, Mahjong, Sudoku and many more. You come to the overview with this link. 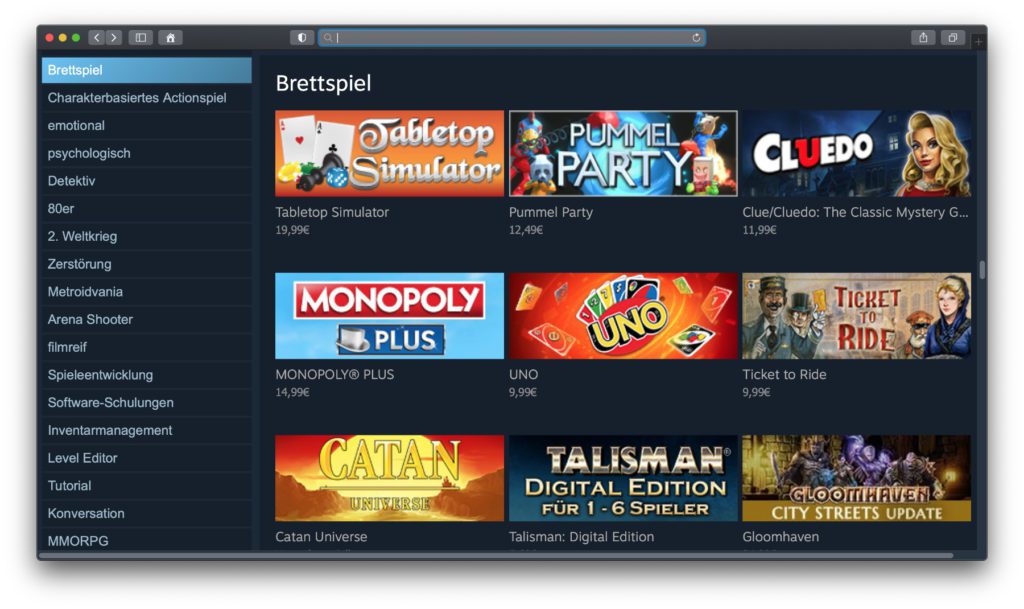 Play board games on the Nintendo Switch

A very recommendable game collection is "51 Worldwide Games". The game, published directly by Nintendo, offers a multiplayer function for 51, 2 or 3 players for most of the 4 games. This can be used locally with one or two consoles or via the Internet with the online mode. It includes: air hockey, four in a row, go, mahjong, mini curling, darts, bowling, billiards, various card games, backgammon, fishing, don’t get angry, etc. 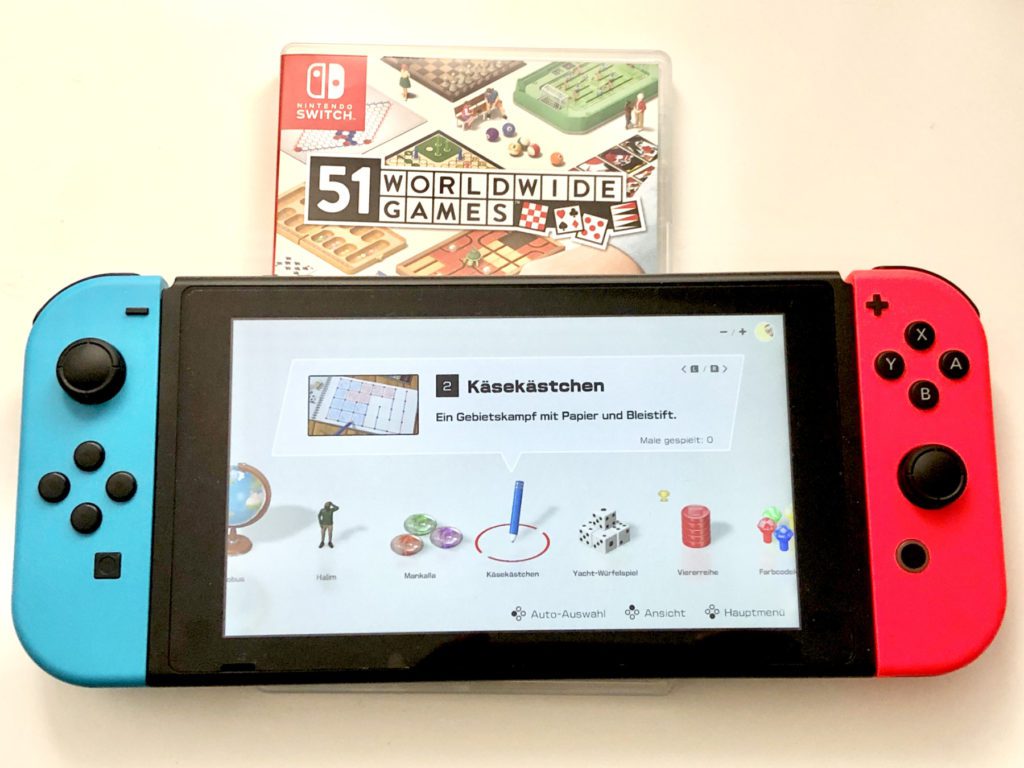 Unfortunately, there aren't that many other games for the Nintendo Switch that could be described as board games. The only one where it really fits is Monopoly’s Switch adaptation, which you can find here. A Nintendo classic that at least comes close to a board game with additional video game elements is "Super Mario Party", Which you can even buy in a bundle with" 51 Worldwide Games "on the linked product page. Mario Party has been a popular title since the Nintendo 64.

Super Mario Party - [Nintendo Switch]
45,99 EUR
Buy it at Amazon Price includes VAT, plus shipping costs (updated: 4.12.2021 at 12: 00 clock)
-
Do you like my blog? Then I would be happy to receive a short review on Google. Easy leave something here for a moment - that would be great, thank you!