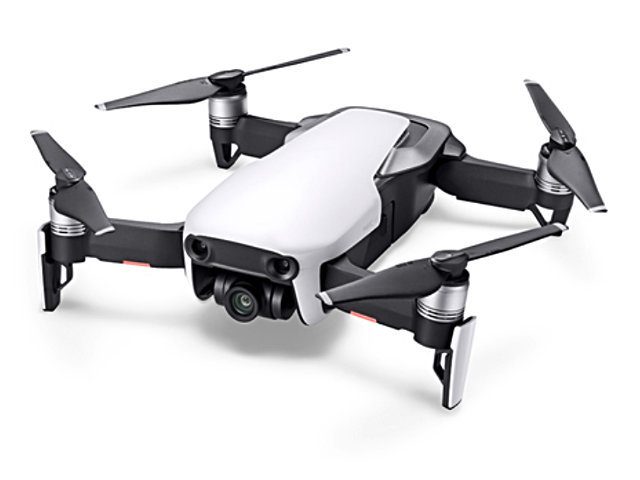 Today, January 23, 2018, the DJI event "Adventure Unfolds" took place in New York, at which - similar to Apple's keynote events - innovations from the drone manufacturer from China were presented. Here I have given you a summary of the presentation that you can send by Live Stream with news and data on DJI Mavic Air created. TL; DR: Click here to go to the shop and to pre-order. 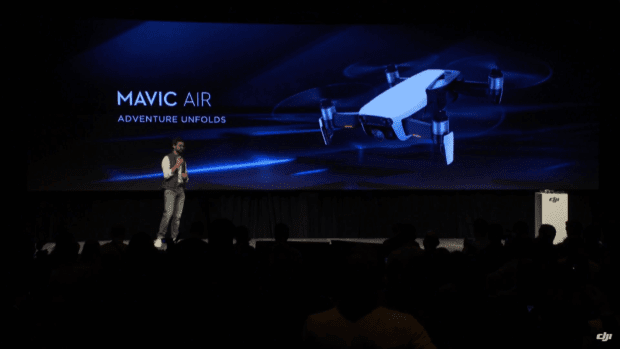 The DJI Mavic Air was unveiled at the Adventure Unfolds Event in New York on January 23, 2018.

The DJI Mavic Air is the new, foldable and smart high-end drone that was unveiled today in News York by Michael Perry, DJI Director of North America. First there was a brief review of the company's previous milestones, such as the DJI Spark 9 months ago, the DJI Phantom 4 Pro before that, and the DJI Mavic Pro 18 months ago. Again and again, the designers and engineers had to go back to the drawing board. This time, due to new technologies and innovations, that also meant developing a new ventilation system to cool the drone well during flight and recording as well as on-board processing of recordings and to protect it from overheating. 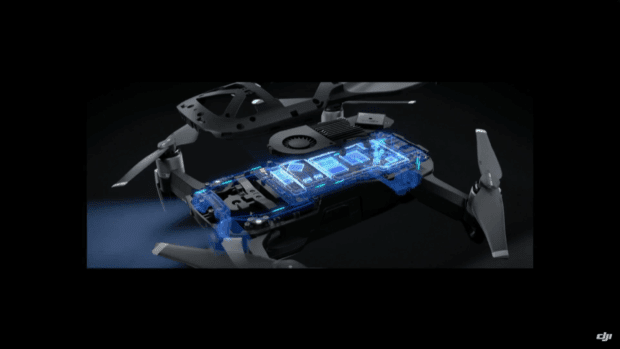 Seven cameras, numerous on-board features, antennas in the landing pads, 8GB internal memory and a new cooling system as well as much more are in the camera drone.

The DJI Mavic Air is only half the size of the Mavic Pro and also weighs significantly less. Here I have summarized the most important data about the new quadrocopter with 4K camera:

You can find more specs in the article "DJI Mavic Air: Technical Specifications". 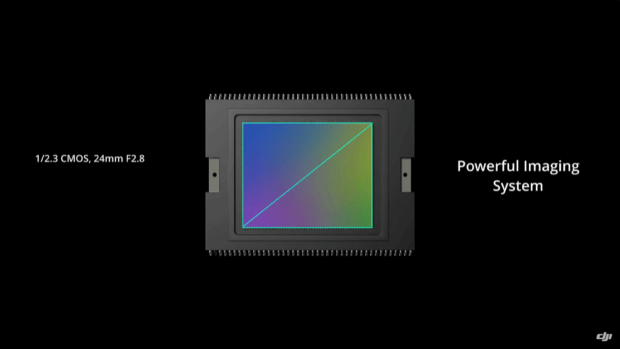 The 3-axis gimbal has been revised for the new drone from DJI and is now supposed to compensate for flight maneuvers, vibrations and shocks even better than the predecessor of the Spark, Mavic Pro, Phantom 3 and so on. In addition, the gimbal and camera no longer hang as freely as with their predecessors. There is a protection that results from the new housing design, but which also serves to draw in cooling air, which is then passed through the drone. 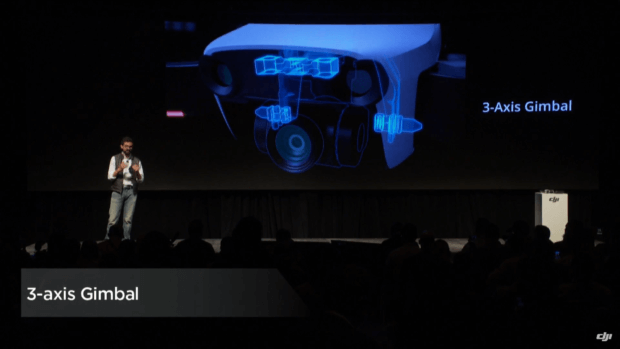 The antennas for receiving and sending signals (control, video, photos) are now at the extreme points of the drone, which should ensure better communication. They sit in the landing feet or legs of the drone and should neither disturb nor be disturbed by the other hardware inside. 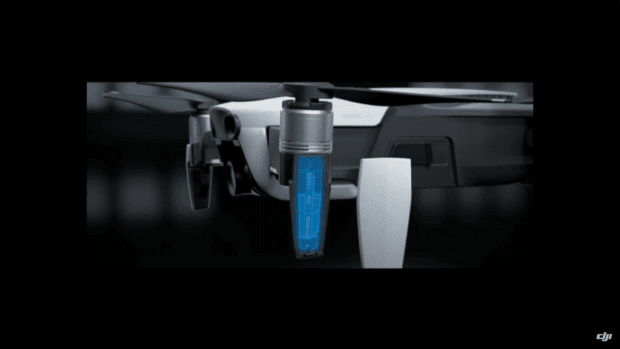 With the DJI Mavic Air, not only the smallest, most mobile and smartest camera drone of its type and price range was presented, but new features were also presented. Here are all the functions that I wrote down during the performance.

HDR or High Dynamic Range stands for more beautiful images, better colors and clearer details in photos and videos. The new DJI Mavic Air features an HDR mode to provide just that. At the Adventure Unfolds Keynote in New York, Michael Perry presented this mode and showed two images of the same scenery, one with and one without HDR. The result shows that the new feature definitely pays off! 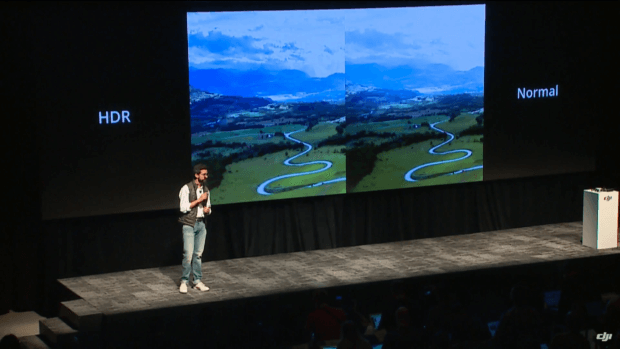 Photo of the DJI Mavic Air with and without HDR in comparison.

Active Track: better than before

ActiveTrack has been improved for the DJI Mavic Air. The drone will now follow one or more objects/people while keeping the correct distance, can deal smartly with changes in speed and much more. In addition, it is sufficient on the screen of the smartphone used in the DJI GO 4 App just tapping on the object/person to be followed. No box, no box has to be drawn around it. A smarter follow that enables faster good recordings of one-off events. 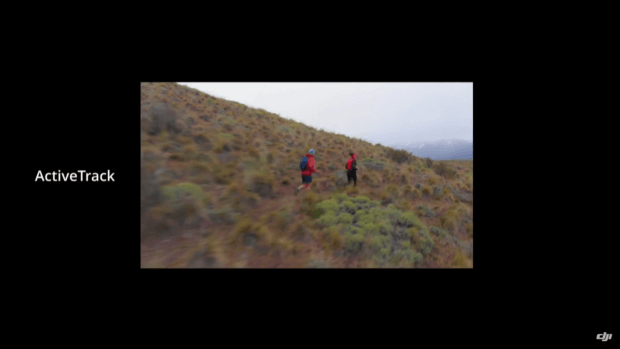 Asteroid is a new Quick Shot mode that combines individual high-resolution stills (i.e. photo recordings) from a panorama and bends them in such a way that a kind of small planet or “asteroid” is created. This effect has been in vogue for a few years and is almost out again. However, the new DJI Mavic Air can achieve the corresponding effect without any additional work on the part of the photographer. There is also the Boomerang effect for video recordings. The drone flies around the pilot (or another object) in a circular or oval movement, like a boomerang would. This creates a fully automatic sightseeing flight that would require a lot of manual practice. 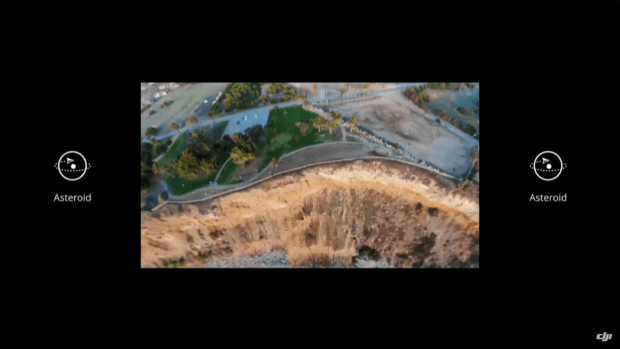 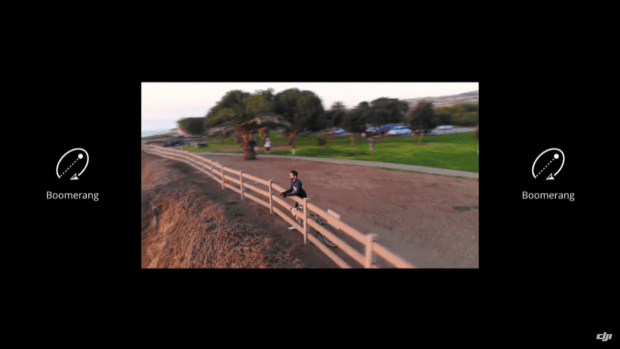 The gesture control (Gesture Mode) was particularly emphasized on the DJI Spark. With the new camera drone from China, the corresponding control and recording options without a controller and smartphone have been reinvented and provided with innovations: 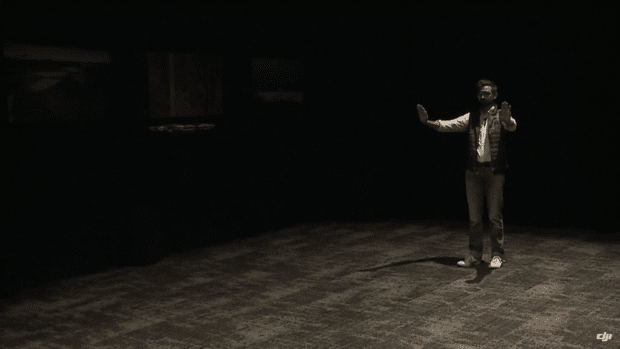 With Smart Capture, the drone can be controlled even better with the palms than in the Spark's Gesture Mode.

The new Flight Autonomy 2.0 results from the 3D map created on board, which the DJI Mavic Air creates using the 7 orientation cameras and the newly arranged sensors. When taking off, landing and navigating in the air, the drone is now much smarter and more manoeuvrable than, for example, the predecessor DJI Mavic Pro. In addition, there is the new Advanced Pilot Awareness System (APAS), which is conducive to faster and more intelligent avoidance of obstacles. This is supported by a very high wind resistance. 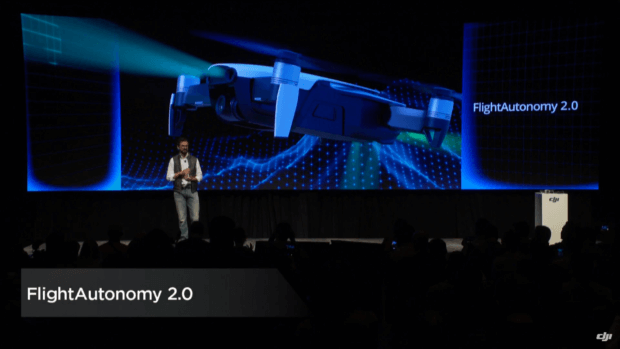 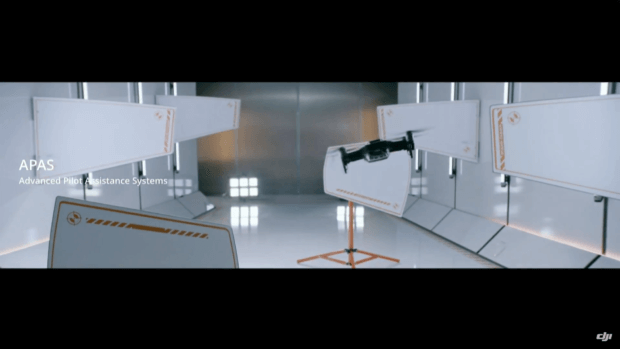 Not only Michael Perry was on stage, but also the outdoor photographer Chris Burkard. He was able to use the DJI Mavic Air on a trip through Patagonia in South America and praised the compact dimensions, the low weight and the smart recording and control options of the quadrocopter when he presented the recordings. It is a wonderful tool for all outdoor people who are looking for ready-to-use and handy equipment in addition to the DSLR, tripod and other bulky equipment. Burkard was convinced that Mavic Air will inspire millions of people to go out, experience and document adventures. 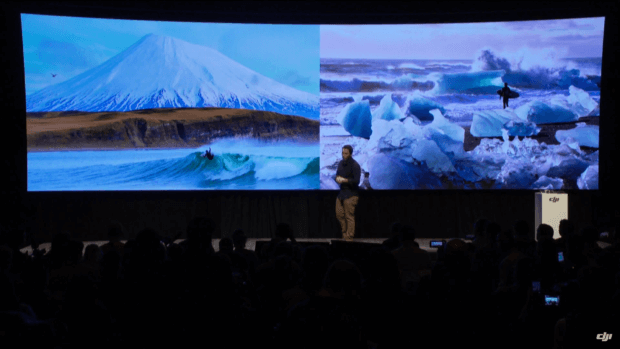 Starting today, so from now on, you can pre-order the DJI Mavic Air. This is just as possible at the dealer as it is at the official product page of the DJI Shop. You not only have the choice of the three colors "Arctic White" (white), "Onyx Black" (gray / black) and "Flame Red" (sports car red), but also between the standard edition for $ 799 or the DJI Mavic Air Fly More Combo at $ 999. That sounds like a lot; But if you consider the sophisticated technology and the scope of delivery, then this is put into perspective. By the way: when buying a DJI Mavic Air, pay attention to it, directly DJI Select to use! Incidentally, the Mavic Air will be shipped from January 28, 2018; then it is also available from the dealer. 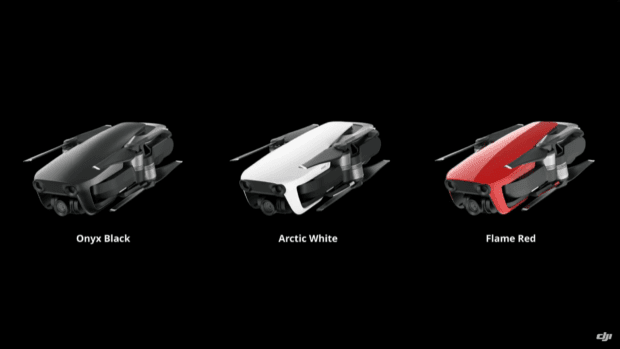 Presentation of the Mavic Air in the video 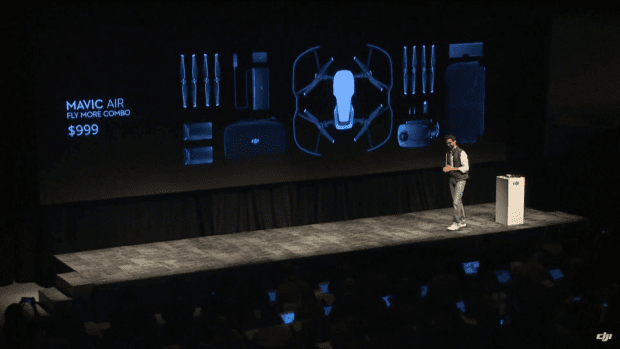 The DJI Mavic Air Fly More Combo offers a great savings offer for people who want the camera drone always ready for use!

What do you think of the new DJI Mavic Air, which was presented today in New York by Michael Perry and Chris Burkard and a few helpers? Is it the camera drone you've been waiting for and are you looking forward to the new functions such as HDR, Active Track, the new Quick Shot modes Asteroid and Boomerang, Smart Capture, Flight Autonomy 2.0 and so on? Feel free to leave a comment with your thoughts on the device;)