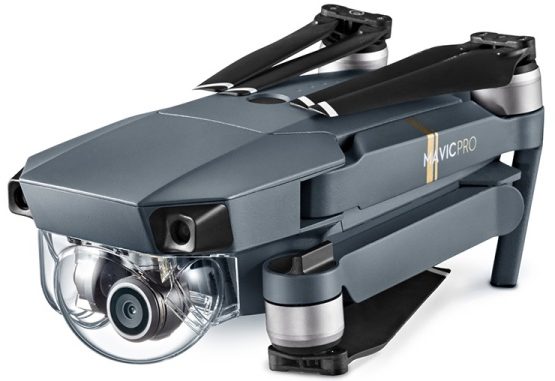 The Chinese drone manufacturer DJI has presented its new handy drone, the DJI Mavic Pro. Lately I still have reported by the GoPro Karma and left me positive about it. Of course, I don't want to take anything back from that, but with regard to the DJI Mavic Pro, I have to express myself even more positively. To anticipate a dispute between the DJI and GoPro camps: both drones have their advantages and their target groups. When deciding for or against one of the models, you just have to know the future fields of application ...

The DJI Mavic Pro: data and facts about the drone

DJI has really thought about this quadrocopter and knows how to counter the GoPro Karma. In addition to navigation and stabilization by GPS and Glonass The DJI Mavic Pro also comes with sensors that scan the environment forwards and downwards. So a safe flight in closed rooms is no longer a problem. In addition, the device including the rotors can be folded up to a handy size. Of the Manufacturer describes the size the folded device with a bottle of water. Casey Neistat showsthat it also fits in your pocket.

Data sheet and other information at a glance

The DJI Mavic Pro does not bring a detachable camera with handheld gimbal and the like, but a longer flight time and a smaller pack size. In addition, the control unit is more compact; you still need a smartphone DJI GO app, but the division into LCD display and smartphone makes operating the drone a lot easier - you always have all the data in view. In addition, DJI already offers numerous spare parts that are also affordable. So if you should crash the quadrocopter despite distance sensors and GPS, you can restore it cheaply.

DJI Mavic Pro scope of delivery, in the shop (see link in the article) there are also spare parts in case there is a crash; Image source: DJI

As already mentioned at the beginning, both drones have their convincing advantages. So which target group is mainly served by the GoPro Karma? Those who want to use the camera (e.g. GoPro HERO5 Black) in their hands, on a tripod or in the water. Even those who do not want to bring in a smartphone for control will be satisfied with the control unit including the display on the GoPro Karma. In addition, there is no need for an extra handheld gimbal if you have the karma. In terms of price, both drones are also comparable.

Conclusion and comparison in the video

If you just want a drone and no GoPro or handheld gimbal, you should use the DJI Mavic Pro. The official website of the DJI online shop with all information and the possibility to buy you can find here. With this device you get a longer flight time, a clearer and easier operation, a smaller pack size and extensive obstacle detection (up to 15 meters away). So there are many points of criticism for the DJI Mavic Pro. Here is a comparison with the GoPro Karma in video form:


And here is the extensive video by Casey Neistat including a view of the drone, its features, the control unit and above all: incl. Video recordings of the DJI Mavic Pro:
-