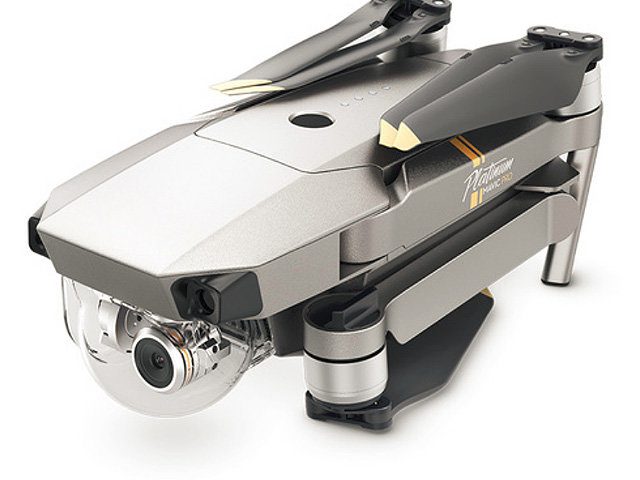 DJI Mavic Pro Platinum If you want to buy, you will certainly want to know what it can do, what is in the data sheet and how it compares to other drones. The Mavic Pro Platinum camera drone from the Chinese professional manufacturer DJI offers especially compared to its predecessor, the DJI Mavic Pro, some advantages and innovations. You can find details on this in this post as well as when reading the linked post on Mavic Pro.

The DJI Mavic Pro Platinum camera drone for high-resolution photos and videos in HD, FHD, 4K and C4K. Data, comparison to Spark, Phantom 3 and more can be found in this post!

You can currently order the DJI Mavic Pro Platinum camera drone in the manufacturer's official shop as well as on Amazon. So far, there is no difference in price. However, if the quadrocopter with 4K video recording and 3-axis gimbal is on the market for some time, there could be bargains on Amazon. Here you can find the individual product pages:

Compared to the previous model

In order to be able to assess the DJI Mavic Pro Platinum, it is quite helpful to compare it with its predecessor. In the following I have compared some technical data from the data sheet of the drones. This gives you a pretty good overview of similarities and differences:

The biggest differences in the Platinum version of the DJI Mavic Pro compared to its predecessor are the longer flight time / hovering time and the noise reduction. An important question, if you are already using the “old” model or want to buy accessories, is of course “Can I also use the Mavic Pro batteries in the Platinum?” - The answer is: Yes, you can use the batteries in the various models change.

The noise reduction in the DJI Mavic Pro Platinum camera drone results on the one hand from the Low noise propellersthat you theoretically too retrofit for the Mavic Pro can. On the other hand, the rotors are controlled differently: The motors / rotors are no longer controlled trapezoidal, but sinusoidal by the ESC (Electronic Speed ​​Controller). But this is only the case with the Platinum, which is why you should use it if you want to take off, fly, hover and land not only longer but also more quietly. 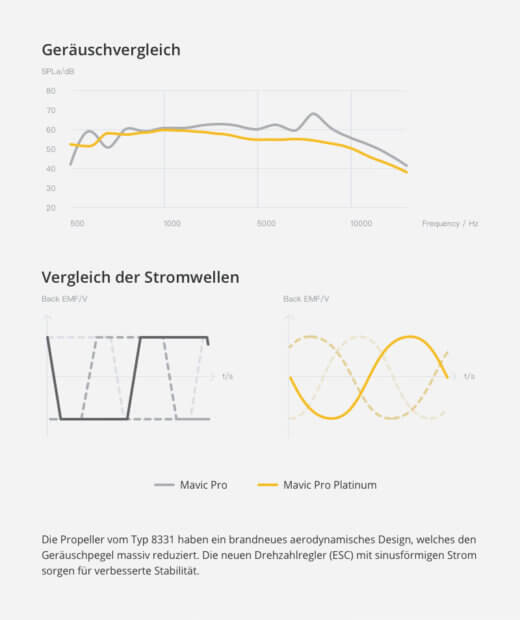 The noise reduction in the DJI Mavic Pro Platinum results not only from the low noise propellers, but also from the adapted ESC, which controls the rotors sinusoidally. Image: DJI.com (click to enlarge)

In order to be fully equipped, it is also advisable to buy the “Fly More Combo” version of the DJI Mavic Pro Platinum. This contains practical accessories such as two additional batteries, a charging station, a car charger cable, a power bank adapter, additional propellers and so on. You save 118 € compared to buying the drone individually with the respective accessories. You should then (partially) invest these savings again - for example in a Drone license plate or a drone badge. Your data is recorded on it in a fireproof manner, so that your copter is not permanently lost in the event of a crash or accident. You should also be on the topic Proof of knowledge / drone license inform yourself ;)

Of course, DJI also offers other drones with cameras, gimbals, high video resolution and other great specs. If you want to compare the data given here with those of the DJI Phantom 3 Standard and the DJI Spark, then I recommend you this post. Maybe you are not necessarily looking for something for the private and hobby sector, but professional camera drones for photo and video productions at a higher level. Then it is DJI Spark Test Of course, nothing for you, but rather the comparison of DJI Phantom 4 and 4 Pro or the contribution to the professional models DJI Inspire 1 and Inspire 2.

Presentation of the DJI Mavic Pro Platinum in the video

Here I picked out a video from TechStage for you. It not only mentions other data from the DJI Mavic Pro Platinum, but also shows how it is handled and test recordings. The video material recorded in the test shows what end customer drones can already do if they come from a professional manufacturer such as DJI (ideally watch in HD):

You control the DJI Mavic Pro Platinum using the controller included in the scope of delivery. However, if you want to see what the camera is transmitting / recording in real time, then you should also pair a smartphone or tablet. In addition to the iPhone and iPad, Android devices can also be used. No matter which operating system you use, you need the right software on the device, and you can use it in the form of the DJI GO 4 App . Here is the download link for Android devices. And here is the download option for iPhone and iPad:

Conclusion on the updated drone

Buying a new one is especially worthwhile if you don't have a camera drone yet or if you want to replace a completely outdated device. But if you already have a Mavic Pro, you don't necessarily need to upgrade to a Platinum. You also get more flight time with one additional Intelligent Flight Battery. If you are brand new, then I would direct you to DJI Mavic Pro Platinum Fly More Combo (here ) guess. So you not only get the drone in one package and with a saving of 118 €, but also a number of accessories for on the go.