DJI Mini 3 Pro – why I ordered the mini drone directly…

This article is about the DJI Mini 3 Pro, which was presented by DJI yesterday on May 10.5.2022, XNUMX. In this article you will find out why I am already enthusiastic about it and why I stayed away from drones for a long time.

I've been involved with drones for quite a long time and have also flown wild models. My first photo drone was an 8-rotor microcopter, which was extremely large, but unfortunately vibrated so much that it was impossible to record a movie with it. Even the photos were blurry at times, although the camera was a Sony Alpha NEX 7, which certainly had good autofocus.

If you would like to exchange ideas with other DJI Mini users (without sending your data to Facebook), you are welcome to join my group. I use the Apple Messages app. If you would like to join the group, please send me your Apple ID (email or phone number). info@sir-apfelot.de and write "DJI Mini Group" in the subject. Then I put him in the group.

The DJI Mini 3 Pro is a small drone that weighs less than 250 grams and therefore has hardly any restrictions when flying. I ordered it straight away because it combines fascinating features in the smallest of spaces (photos: DJI).

Then came various other models, such as the Asctec Falcon 8, DJI Mavic, DJI Phantom, DJI Spark and the DJI Mavic Air. So I've been through a lot and in the end I have to say that DJI drones offer the best bundles of good technology and a good app from my point of view.

With the Mini 3 Pro you can either take the controller on the left, which requires a smartphone. I also ordered the new controller (right), which has an integrated 5,5 inch display and is basically an Android system with the pre-installed DJI app.

However, I haven't bothered about drones seriously in the last few years, because the constant legal changes and the introduction of the drone license have spoiled the fun of flying for me. And overall, there is a negative attitude towards drones among the population, which is often not unfounded when you see some YouTubers simply flying in cities, highways or near people and animals without regard to any laws, thereby endangering them .

But despite all these negative points, in the last two or three years I haven't had the opportunity to take a little sightseeing flight or take a few photos from a bird's eye view when I've been out in nature. The only drone I currently have is the DJI Mavic (the first Mavic) and it's too heavy to take with me on every hike. So basically I would still have the will to do something with a drone, but I don't have the right model.

The DJI Mini is really pocket-sized, but don't forget that you also have a controller with you. So you need at least two jacket pockets.

The DJI Mini model series is the solution to my problem and with the DJI Mini 2 I could have bought a decent mini drone last year. No question, the DJI Mini 2 is also impressive for its size (I'm saying that without ever having flown it and just based on the reviews I've seen), but it just doesn't have a LOG profile for filming, which one does would enable a high dynamic range and proper post-processing for videos.

I wasn't entirely convinced of the picture quality I've seen so far either. Photos in sunlight are of course good and the RAW format also helps to get more out of post-processing, but the darker areas are often noisy and the dynamic range is not that great either.

For these reasons I have not bought a DJI Mini before, but that has changed with the DJI Mini 3 Pro.

With a flight time of 34 minutes, the flight duration is another 3 minutes longer than with the Mini 2.

What has been improved are the following points:

You can already see that the DJI Mini 3 Pro is technically quite a leap forward. A small, unpleasant side effect is that the price is also noticeably more expensive.

So if you are looking for a cheap entry-level drone, the DJI Mini 2 might be the best choice. If you want the latest technology at a still good price, you can access the DJI Mini 3 Pro without hesitation.

The DJI Mini 3 Pro has another special feature: it can actually turn the camera into the vertical format and thus create high-resolution photos in portrait format.

My DJI Mavic is actually quite a passable drone. There are only three things that bothered me a bit:

In principle, I want to have a drone that is as harmless as possible, that is nice and small, maybe also makes less noise than a large one and still delivers usable photos and videos. The DJI Mini 3 Pro should meet these requirements.

If you want to take a look at them, you can go directly to DJI or Amazon. The relevant links are here: 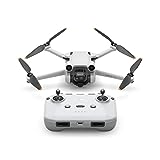