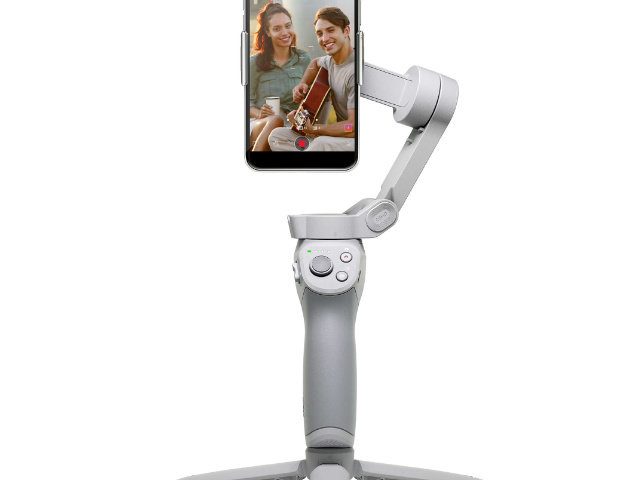 With the Osmo Mobile 4 DJI has introduced a new generation of its handheld gimbals. At the same time, the name was evaporated, so that the device only DJI OM4 called. You no longer have to clamp your iPhone or Android smartphone in the stabilizer for your mobile phone and then pull it out again if you want to use it for other purposes. Because now you can attach and remove it using a magnetic holder. The foldable handheld gimbal is also not too heavy at 390 g. Further data and information on new functions of the DJI OM 4 can be found in this post.

TL; DR: You can go directly to the shop page here

The new DJI OM 4 smartphone gimbal scores with its magnetic holder, long battery life and numerous functions (partly via the DJI Mimo app) with which cinematic video and photo recordings are possible. This makes the DJI Osmo Mobile 4 more than just an image stabilizer.

In the following I have summarized the most important technical data from the DJI OM 4 data sheet as well as other important information. Below you will find explanations about the individual functions, information on usage, downloading the app and summaries of reviews and test / experience reports.

Everything you need for use is included in the DJI OM 4 scope of delivery. You have to contribute a charger yourself, but you certainly already have a USB charger at home;)

With the DJI OM 4 you get everything you need in the standard scope of delivery. If you want to get started and make cinematic recordings, you have various options. On the one hand, the pure use of the gimbal for image stabilization with manual camera work. On the other hand, there is app-controlled recording, for example with tracking and camera movements (e.g. mounted on the tripod supplied).

The story mode is just as much a part of the functions as the gesture control (so that you don't have to stand behind the camera to operate it), ActiveTrack 3.0 (for tracking marked people or objects) and Quick Roll (for quickly switching from portrait to landscape mode and back). It gets even cooler with hyperlapse, motionlapse and time-lapse recordings, which turn the holiday video into a cinema experience.

There is also slow motion, 240 ° panorama, 3 x 3 panorama (for poster images), DynamicZoom (for vertigo effect) and SpinShot for a rotating camera. Creative photos are also created by the CloneMe panorama, in which a person can be seen three times in the same panorama. All in all, a whole lot of functions that will improve the quality of your photos and video recordings. This saves time that you don't have to spend in Photoshop or an editing program.

An impression of everything you can get it here on the manufacturer's websitewhere everything is demonstrated in the form of small demonstrations. In this way, you will also receive an example for each of the individual terms.

With the DJI Mimo app you can use various video modes. In addition to slow motion or time lapse, rotations, ActiveTrack 3.0, DynamicZoom, CloneMe Panorama and more are possible.

But you can also get a picture of the new handheld gimbal from the drone manufacturer DJI here. First of all you will find the official one Videothat was released on August 26, 2020 for the product's launch. Then an official one Tutorial of the manufacturer to set up and use the device for the first time. Third, under this paragraph, you get a short but professional one Review by 9to5Mac.

For example, to use the gesture control known from current DJI drones, you need the DJI Mimo app on your smartphone for the OM 4. This communicates with the gimbal via Bluetooth and thus enables the unique recording modes. The DJI Mimo download for iOS and Android can of course be found in Apple App Store as well as in the Google Play Store.

The DJI Osmo Mobile 4 handheld gimbal has only been on the market yesterday, but as always there have been various reviews as well as test and experience reports. Especially the trade magazines that received a test device in advance are way ahead with their conclusions. In summary, they write about the new DJI OM 4 that both the magnetic mount has always made a secure impression and the gimbal functions set a new standard.

Cinematic recordings can be created via the DJI Mimo app and above all the image stabilization, which should be extremely good for handheld recordings. Functions can also be used, triggering and pausing / stopping the recording using the buttons and buttons on the gimbal itself. For example, it turned out to be very good here repeatedly described the easy attachment and detachment of the phone using a magnet.

All in all, this is the conclusion of the 9to5Mac test embedded above, using the DJI OM 4 is fun. It offers the possibility of greatly simplifying the creation of mobile video content. It is also ideal when traveling, as it can be folded up small and is not too heavy. In addition, the price is small enough. It is a good investment for content creators who produce for YouTube, Instagram, etc.

Your opinion on the DJI OM 4 smartphone gimbal

What is your opinion on the DJI OM 4, which was released about a year after the DJI Osmo Mobile 3? In comparison (see the report linked to 3 in the table), the "old" model also offers good performance and many of the functions listed. With the 4, there is now better technology, a few new functions and easier use with the magnetic holder. Or do you see it differently? Are you missing a few features or extras? Feel free to leave your opinion as a comment under this post;)