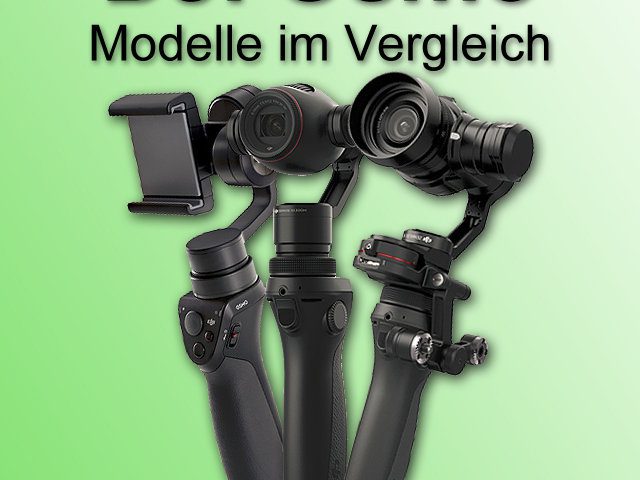 The Chinese drone manufacturer DJI is not a rare topic here in the blog, which is one of many occasions to get familiar with the product range DJI Osmo too busy. Under the name "Osmo", DJI sells devices for video recording with simultaneous image stabilization by a gimbal with three axes. DJI Osmo +, DJI Osmo Pro and DJI Osmo Mobile offer different functions and application options for different requirements. In this post I would like to compare the individual DJI Osmo models and also discuss their use with the iPhone.

The handy steadycam from China has been part of the DJI range since 2015; It was first presented at the CES 2015. The handheld with intelligent gimbal has been on the market since October of the same year. There are now different models and since 2016 every Osmo + or Osmo Plus and Osmo Pro has also been included DJI Osmo FlexiMic, a small flexible microphone with a 3,5mm jack connector. There was also one for that back then press report.

It is now 2017 and the range is not only designed for fans of stabilized cameras, but also for amateur filmmakers with an affinity for smartphone cameras. You can even take professional slow-motion recordings with the iPhone. Incidentally, the possibility of using the DJI Osmo cameras to record videos in 4K resolution to create. But let's take a closer look at the individual models.

Three models in comparison: Plus, Pro and Mobile

Plus and Pro: How is the sensor different?

The DJI Osmo Plus handheld has a Zenmuse X3 zoom camera with a corresponding gimbal. A 1 / 2,3 inch CMOS sensor is built into the camera, which effectively records 12,4 megapixels. The small sensor was criticized in one or the other test that I have read in poor lighting conditions. But if you want to film your summer vacation and other daytime activities, the Plus model will be sufficient.

With the Pro Product, there is a bit more technology that can be used for high-profile productions, even in weaker light. Because a 5/4 CMOS sensor is built into the Zenmuse X3 gimbal. To classify the whole thing: the X3 sensor is as big as that of the GoPro, the X5 sensor as big as that of the Panasonic Lumix GH4. If you compare a test of the Plus and a test of the Pro model, it becomes clear that weak light is not the problem with the more expensive product.

At the end of 2018, DJI presented a mini gimbal with a built-in camera: The DJI Osmo Pocket. This one films with 4K and 60 fps and has a 1/2,3 inch sensor, which we also know from the DJI Osmo Plus. The integrated touch screen in the Osmo Pocket allows the gimbal to be operated without the iPhone. However, there is a port that allows connection to the iPhone to use advanced features.

Both DJI and other manufacturers have plenty of accessories for the individual DJI Osmo models. This is how the gimbal and camera on the DJI Osmo Pro can be exchanged and these lenses can be attached (sometimes with the required balancing ring):

The Osmo accessories offered by DJI for basically all three models ensure that their functionality exceeds that of a handheld. For example, there is a bracket for the car roof, various tripods, replacement batteries, extensions, charging stations and so on. Incidentally, DJI uses the SanDisk Extreme microSD with 64GB suggested. It is also recommended to use a smartphone for photo and video recordings, as the cameras of the models mentioned can be accessed via DJI Go App can control. A holder for smartphones is included in the scope of delivery of the devices.

DJI Osmo Mobile: Use iPhone and Co. on a handheld tripod

A gimbal in connection with the camera created for it is something nice. But if you have already followed the links to the DJI Shop (see table), then you have probably already seen the individual prices. So if you are not looking for a tripod, gimbal, handheld stabilization, etc. for professional productions, but are also satisfied with cell phone recordings, you should take a look at the mobile model.

With the DJI Osmo Mobile, the cell phone can not only be used as a control element (with the DJI Go app), but also takes on the central role of the receiving element. Whether it's fast action, a romantic sunset or a mixture of different shots - stable images and interesting camera shots are definitely more beautiful to look at with the DJI device than if an iPhone, Android device or other mobile phone had only been carried by hand. Also a clear plus for holiday videos or private travel documentation!

Film with the iPhone

The Zenmuse gimbals and cameras, which are used in the Plus and Pro models and in the DJI drones (Phantom, Inspire, Mavic, Spark, etc.), are recommended for more professional projects; the iPhone can also do a lot in the video and photography categories. Whether normal photo, live photo, panorama, video in Full HD or 4K: the cameras of the iPhone and the Plus models of the same can be used for many things. That was on the last Keynote-Events are always highlighted.

The iPhone 7 Plus, for example, has this camera data sheet (excerpt):

What will be launched on the market in September 2017, i.e. in just a few months, is hard to imagine. Because the iPhone 8 and the iPhone 8 Plus will once again be by far “the best iPhones of all time”. But Android products can now also be seen in some categories of functionality. About that Sony Xperia XZ Premium with super slow motionthat conjures up an incredible 960 frames per second.

iPhone 7 Plus with and without Osmo Mobile

Here I have selected a video for you in which recordings of the iPhone 7 Plus with and without stabilization by the DJI device are compared. The test clearly shows that wobbling and rapid movements with the gimbal are a thing of the past. In addition to driving around the block, there are certainly thousands of other application examples:

Links to the online shop

Anyone who has already found out about the DJI drones from Phantom and Inspire to Mavic and Spark is sure to know the manufacturer's own control app for smartphones and tablets. These DJI Go app is used next to the copters to control the DJI Osmo products. But it's not just about starting and stopping a recording. It's also about exposure, panorama shots, automatic shooting sequences and, by and large, about making full use of the possibilities offered by the handheld. I've already selected the DJI Go download for iOS and Android for you;)

Small note: this app is not the same as for Phantom 4 (Pro), Inspire 2, Mavic Pro, and Spark. There is a separate app for the new DJI products. Details can be found in the Contribution to DJI Spark.

Your feedback on the topic

What do you think of the stabilizer for videos and photos with the smartphone or of one-handed steadycams with their own cameras on top? Do you tend to buy in order to literally have video recordings under control in the future? Feel free to leave your opinion on DJI Osmo. Feedback from users is also welcome! ;)