DJI Osmo Mobile: A smartphone gimbal for videos with a professional look

The Chinese company DJIthat is mainly due to the Drones called DJI Phantom has become known, brings with the DJI Osmo Mobile a gimbal for smartphonesthat is in no way inferior to that of drones. Those who are not very familiar with the technical jargon of video device stabilization: A gimbal is used to automatically stabilize the camera - for example on a drone or in the hand of the film maker. After the Osmo and the Osmo +, there is now the on the IFA 2016 presented device DJI Osmo Mobile. Nothing stands in the way of wobble-free smartphone videos.

The first was already five years ago Feature film that was shot entirely with smartphones. Well, five years after the strip Olive, there are also numerous tools for private users to produce professional-looking photos and videos with the smartphone. And "professional" also means "wobble-free". 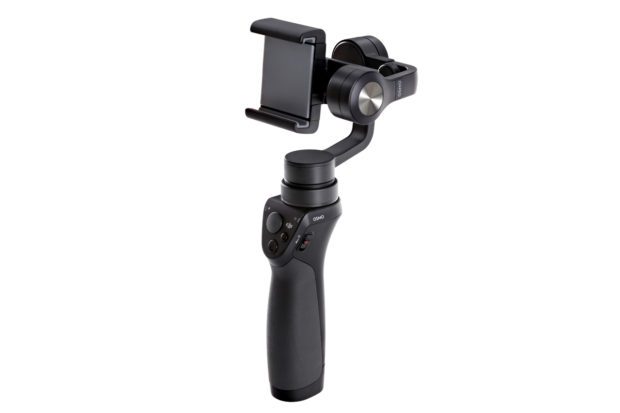 The communication between smartphone and DJI Osmo Mobile is realized via Bluetooth. By means of the DJI GO app recording modes can then be selected and further settings can be made. An object, a person, an animal or another fixed point in the image can also be selected. This then remains in focus when the camera or the end of the film moves. So are Tracking moves a lot easier realizable.

The construction in which the smartphone is clamped rests directly on the handle. Using the DJI Osmo Mobile is by the way with smartphones up to 85 mm wide possible. The pivot point on the handpiece is responsible for left and right movements. The next connection point (when used behind the smartphone) compensates for the inclined position of the device. 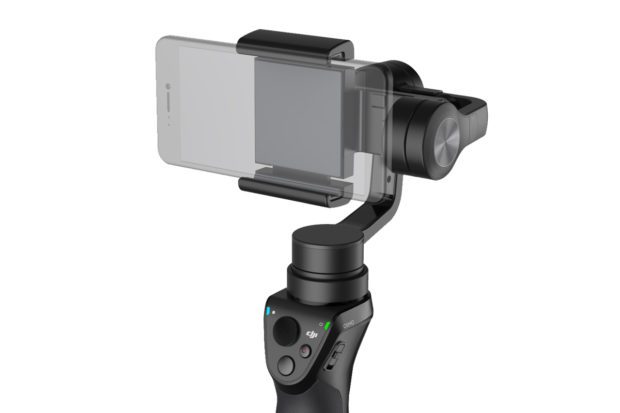 The DJI Osmo Mobile can be used with the iPhone, but also with other smartphones; Image source: DJI

The third and last connection point “tilts” the smartphone, so to speak. It is located to the right of the smartphone when using the gimbal. Before you can use it DJI Osmo Mobile Gimbal manually calibrated once. It's quick and easy to understand even for laypeople. Then the device, which reacts with minimal latency, independently takes care of a perfect balance of the phone.

Im What's in the box not included, but necessary for the full range of recording options, is a Frame. On this one can DJI Osmo Mobile Gimbal be attached to moving time-lapse recordings (I think it's especially cool!), Panoramic photos and much more to shoot. Different points can be selected, which are then to be controlled in a given period of time. In addition, are 180 ° panoramas with up to nine images possible. 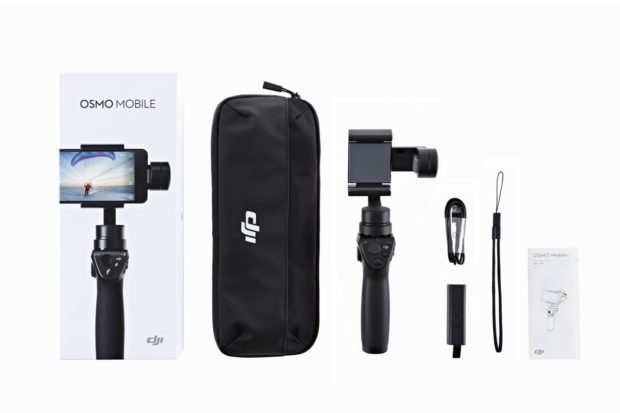 The scope of delivery of the DJI Osmo Mobile Gimbal. You can find details on the product page of the DJI Shop; Image source: DJI

The target group, which is also evident from the advertising text from DJI, is among other things vloggers (on YouTube, vimeo or other platforms): "The Osmo Mobile's 3-axis gimbal system stabilizes all your movements and transforms every recording into a cinematic video. Thanks to the ActiveTrack technology of the DJI GO app, your smartphone always keeps an eye on you while you are moving freely. The Osmo Mobile also has live streaming, motion timelapse, a panorama function and much more. Create your own videos and share your life with your friends! "

The DJI product video also gives a good insight into the possibilities of the DJI Osmo Mobile:

If you are interested in the new gimbal from DJI and want to buy the Osmo Mobile, then you can do that among other things in the official DJI online shop. You can see and test it from today and until September 7, 2016 at the in Berlin International Radio Exhibition (IFA). Is to be found DJI with the Osmo Mobile there in hall 3.2, stand 105 or summer garden A15.