Double Lightning adapter: charge the battery, audio and more with the iPhone splitter 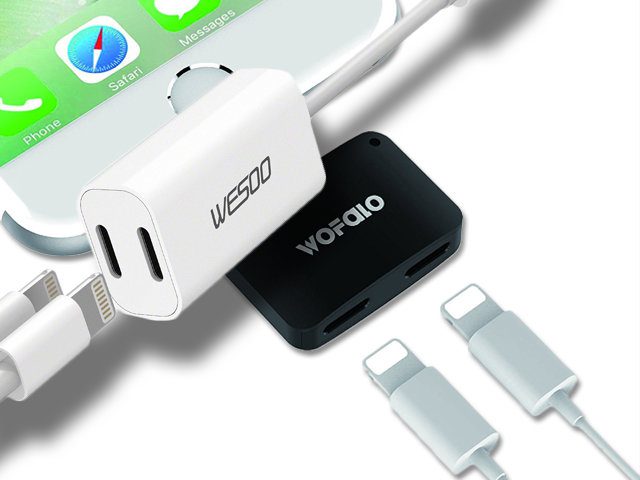 With the iPhone 7 and iPhone 7 Plus, Apple has said goodbye to the headphone jack and has largely reduced the connectivity for charging the battery, headphones and other accessories to a Lightning connector. Although there have been splitters for Lightning on the iPhone from Apple itself as well as similar products from Belkin, users in online reviews have not shown themselves really satisfied with them. The market has been a little more open since the beginning of 2017, which is why I can now show you a selection for double Lightning adapters that provide more interfaces on the Apple iPhone.

There have been a few double Lightning adapters since spring 2017. These two seem to be particularly convincing.

Lightning on the Apple iPhone

The Lightning connector on the iPhone and its Plus variant serves as an interface for charging the battery, for connecting to a Mac or PC (and thus for synchronization via iTunes, updates from iOS and Apps, etc.), as input and output for audio and a few other things. One of the first problems, which is similar to the MacBook with USB-C / Thunderbolt 3 was the simultaneous use of the connection for different tasks. Charge the battery and at the same time listen to music via EarPods or make phone calls via Lightning headset (if you are not using the AirPods) - so a suitable product for the problem was needed.

As an exclusive partner of Apple, Belkin already had the Belkin RockStar Lightning Audio and Charging Adapter brought on the market. Matching the iPhone of the year 2016, the iPhone 7 (Plus), this dongle comes with a Lightning plug and two Lightning inputs. This means that the charger and headphones can be used at the same time. The Reviews on Amazon are quite mixed; Nobody seems to be really enthusiastic about the double Lightning adapter from Belkin. It's a shame for an item for just under 40 euros. Mainly because there are also Lightning + jack adapters for a tenth of the price.

Apple itself offered and still offers connection alternatives and splitters; on jack, on the old 30 pin connection, on this and that ... but firstly not on two Lightning connections and secondly not really liked by the users, which the assigned or withheld stars in the Apple online shop show. So until now you had to wait for the right article.

In April 2017 and May 2017, two new dongles for the iPhone appeared on Amazon, which meanwhile also have some good and very good reviews. It is noticeable - and in a positive sense - that the very good reviews with 5 stars predominate here. One reason for me to buy the double Lightning adapter from Wesoo and Wolfalo to introduce. Charge the battery of the iPhone 7 (Plus) and listen to music or make calls at the same time? That shouldn't be a problem with these two:

Charge the battery and listen to music in a different way

If you want to charge the iPhone 7 or iPhone 7 Plus and the iPhone 2017 coming in September 8 and play music from it at the same time, then there are other answers to the question in addition to the adapters shown How do I do that best? - because especially at home or in your own office you shouldn't use headphones for the full sound experience, but boxes - and this is also possible via Bluetooth:

If you are traveling by Power Bank If you want to charge the battery and listen to music at the same time, there are of course items that make a double Lightning adapter obsolete; namely bluetooth headphones:

How do you feel about the matter? Do you have an iPhone 7 or iPhone 7 Plus or are you currently looking which products from Apple, Belkin, Wesoo, Wofalo and Co. you should buy for the iPhone 8? How do you primarily output audio with the new devices - via Lightning, adapter or rather via radio? Feel free to leave your opinions and experiences as well as recommendations for dongles, cables and so on as a comment!