[Update] Labeling requirements for drones: Labels will be mandatory from April 2017 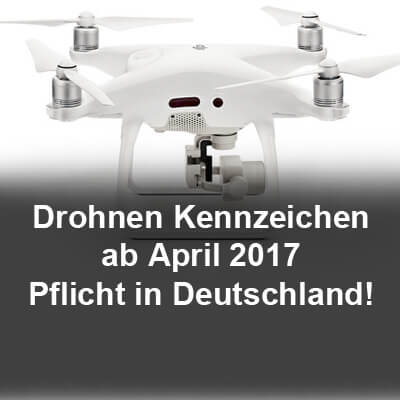 From April 1, 2017, an update of the Air Traffic Regulations (LuftVO) will apply with regard to model aircraft, quadrocopters, octocopters, Drones in general and their obligation to label them by means of drone labels. What these "license plates for drones" are all about, what changes are still there, where you can get a drone license plate and a few more things I would like to bring you closer in this article.

The labeling requirement for the drone comes - unlike in the example illustration, equipping the aircraft with personal data can also be solved in a more elegant way;)

Drones license plates are mandatory for the drone from April 2017!

So now it comes, the labeling requirement for the drone. Other planes or model planes that are brought into the air must also be marked with a license plate. The drone must therefore be able to be assigned to the owner. Incidentally, the new regulation will apply to all models weighing 250 grams or more. The name and contact details, i.e. at least the address of the user, must be noted on the drone license plate. Ideally, a phone number for acute cases. You can already buy drone license plates at various points of contact; among others at Amazon.

Fly drones over 250 grams from April: not without a name tag

So if you want to fly your drone from April 2017, you should order a license plate in March and have it made. Weigh your drone less than 250 grams, then of course you are fine and do not have to invest in a license plate. Such a badge is also not bad for the mini-fliers, just in case it gets lost ... You can order a drone badge with your name and address engraved directly from Amazon. One reviewer for the following product wrote: "I ordered this address label to mark my Phantom 4 Pro - it fits perfectly into the battery compartment and the adhesive strip sticks perfectly."

When March comes to an end, more new rules will apply to drones. Some of them are actually quite positive in nature. Here is a little summary:

Overview of "Rules for the operation of drones" by Minister Dobrindt

The Federal Minister Alexander Dobrindt has presented a "regulation regulating the operation of unmanned aerial vehicles," according to the Federal Ministry of Transport and Digital Infrastructure. There is also a point in it about using video goggles when flying drones: "Flights using video goggles are permitted if they take place up to a height of 30 meters and the device is not heavier than 0,25 kg or another person is constantly watching it in sight and is able to draw the driver's attention to dangers . This counts as operation within sight of the driver.“- the entire pamphlet you can find here.

Today I spoke again on the phone with a colleague who is also a commercial drone pilot. He had some new information, which I would like to briefly summarize here:

Since the drone ordinance has not yet been decided on at the moment, all information here is initially without guarantee and only to the best of our knowledge and belief. ;) In the course of April 2017, the final version will emerge.

At this point I would like to briefly mention one DFS leaflet for drone pilots Clues. It summarizes in simple words what you should pay attention to and what you should do before starting for the first time. I think it sums up important points very well without going into legal details.