Find and delete duplicate contacts on iPhone and Mac 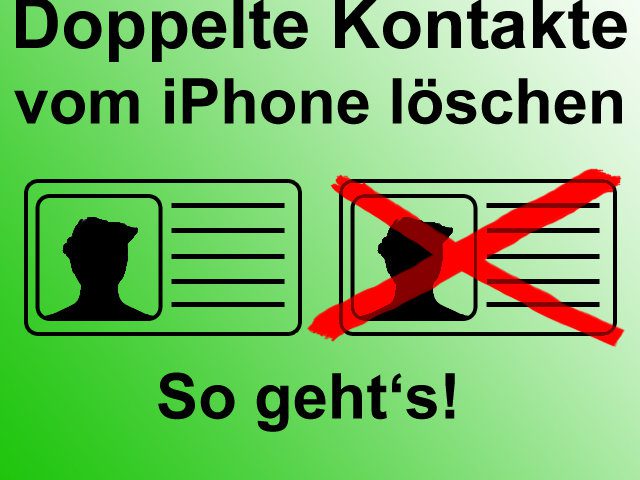 Duplicate contacts on the iPhone or Mac can suddenly appear if the Apple smartphone has been synchronized with e-mail services such as Yahoo, Hotmail, Outlook or with the iCloud. Duplicate contacts in the address book naturally cause frustration because the list of contacts is littered with duplicate entries. The search for a specific contact or the retracing of conversations, if they run over the original or the duplicated entry, are made more difficult. Therefore, here is the solution for duplicate contacts on the iPhone and Mac. These two devices are often linked through the iCloud and troubleshooting on one device is synchronized across all other Apple devices!

Eliminating or merging duplicate contacts on the iPhone can be done in different ways.

Within the Apple support page On the subject of "Duplicate Contacts", the first step is the note that you should test whether the duplicate contact entries are only available locally in the "Contacts" app or also in the iCloud. You can check this by logging into your Apple account iCloud.com log in and look at the business cards there.

If the duplicates are also available in the iCloud, you should contact iCloud support (again, you will only get help here if you still have a device with a guarantee). So I would recommend taking one of the solutions below in any case.

Helpful: The "Find duplicates" function in the Contacts Mac app

One step to get rid of the duplicates quickly is to use the "Find duplicates" function that is built into the Contacts app on the Mac.

The contacts app on the Mac already has a built-in function with which you can search for duplicates.

The function detects duplicates during a search, but it is not very communicative and only gives you a brief information about how many duplicates it has found.

If the Contacts app has found duplicates, you can only decide whether you want the app to merge them or whether you prefer to cancel the action. Unfortunately, Apple does not provide for selective merging or a little more control over the action ...

So you can't see what she's doing. Likewise, you only have the choice between "Merge" or "Cancel". Here, too, the user would certainly have wished for a little more information and a way to intervene in the function.

Contacts and groups - often a cause of duplicates

A possible cause for the duplicates could also be the use of groups, which are used by programs, among other things, when these data are imported into the Contacts app. To check this, open the Contacts app on the Mac. In this there is the overview Groups. In the event of synchronization, there is a high probability that you will find different groups from which the contacts are called. If iCloud, Outlook or similar services are listed, they can be deactivated. In this way, the imported contacts disappear from the overview. In addition, the imported contacts can also be displayed without the previously uploaded ones. Depending on which overview is more complete or more up-to-date, you can choose (and add missing contacts if necessary).

Solution via iCloud or other affected app

If you have synchronized contacts with the app of a certain service, an e-mail provider, a cloud or the like, this synchronization can often be deactivated or undone in the settings of the app.

On the Mac, you can disable or activate the synchronization of contacts between iCloud and the local database on the Mac under macOS. To do this, go to System Settings -> iCloud and find the "Contacts" entry there.

In the iCloud-Settings for example you can simply deactivate the transfer of contacts; the same goes for the calendar, reminders, notes and so on.

Eliminate duplicate contacts directly on the iPhone via the app

In addition to the steps shown, there are also steps that are tailored to the case described Apps like OneContact, Smart Merge Pro or Cleaner. These iOS apps for the Apple iPhone or iPad bring the same contacts together. Here you can find the download and details of the individual programs:

Backup of contacts on Mac

If you want to be sure before doing a merge via the app or with the duplicate search function on the Mac, I would recommend making a backup of the contacts. The easiest way to do this is on the Mac, if you click on a name in the list of contacts. Then you go to "Select all" in the menu under "Edit". And then you go to "File" on the point "Export". There you can select "Export vCard" and "Contacts archive". To be on the safe side, I would make the backup in both formats. In practice, one thing is usually enough, but you never know. ;-)

To explain: "vCard" is a generally recognized format that can also be imported into other programs. "Contacts archive", on the other hand, is a format that only Apple devices understand.

Practical example from a reader

One of my readers had the following constellation: Double contact on the iPhone, but not on his two Macs and on his iPad. ICloud is activated on all devices. He tried various tips, but nothing worked. It is interesting that the OneContact app has not changed anything, while the last desperate attempt with the iPhone app "Smart Merge Pro" (see above in the list!) Then deleted the duplicates. It is interesting that after half a day the contacts on the iPhone were still ok, while they were still double in the iCloud. Normally the iPhone should synchronize its data and adjust the iCloud, but the reader has now deleted all contacts in the iCloud and is waiting for the iPhone to load the current version of its contact database into the iCloud.

Why the other apps were unsuccessful, and one of them was, cannot be explained to me, but it shows again that you should simply test all the ways before you give up. : D

Small note on the subject

When merging or eliminating duplicate contacts, you should make sure that the two entries are identical. That sounds like additional work at first, but it is logical: only if all the data match will the contacts be viewed as duplicates. At least the most important data such as name, e-mail address, etc. should match so that a duplicate can be recognized by automatic solutions such as the apps;)

Did this guide help you? Do you have any other solution to the issue of duplicate contacts on the iPhone? Then leave a comment!