Ecosia - The ecological alternative to Google 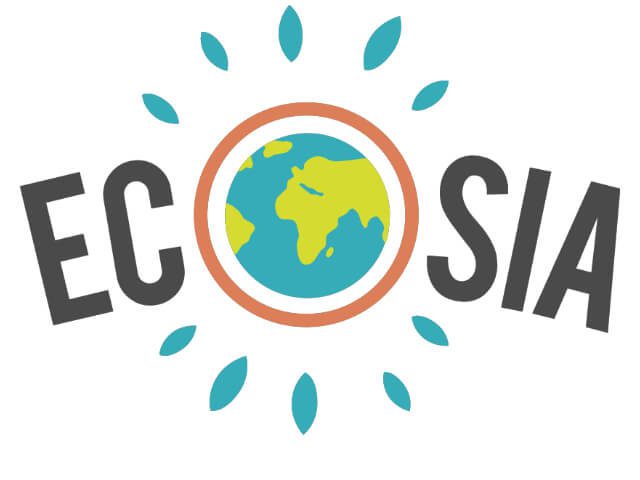 Ecosia is the name of a search engine that doesn't just want to compete with Google, but also acts ecologically in many ways. The Ecosia search engine is actually a project from Berlin, the site of which is secured with green electricity. But that's not all: Because the profit that the so-called Purpose AG generates goes into reforestation programs. According to the search aid, around 45 search queries are required for a tree to be planted - a total of over 50 million oxygen dispensers are said to have been used. The trees are not only planted in Europe, but above all in Africa, Central and South America and in various island states in Southeast Asia.

Ecosia ensures that every search on the internet is linked to green, non-profit projects around the world.

Planting trees with web searches at Ecosia - according to the makers, it should be as easy as it sounds. The profit they generate with advertisements and clicks is put into a green world. As already mentioned at the beginning, a single search query does not bring that much to Ecosia; the mass does it. So if you want to actively do something for the environment, against climate change and also for local companies in regions in need of development, you should search the Internet more often with the Google alternative. And maybe click on the advertisement;)

Ecological and social projects all over the world

Planting trees is just one of the good things about Ecosia and the Berlin team behind it. If you look at that Company press material then you will find pictures and information on projects in Ethiopia, Morocco, Ghana, Uganda, Brazil, Peru, Tanzania, Madagascar, Indonesia and Burkina Faso. Not only are people sent into unfamiliar areas, equipped with shovels and seedlings and used on fallow land - rather small, local companies and projects are promoted so that the economy and, much more, the local people benefit from them.

At Ecosia Home some examples are given. For example, you can find a quote from Sara from Ethiopia:

We plant native acacia trees, because they make the soil more fertile. With our earnings we started a communal savings account for women to borrow and start their own businesses.

We plant native acacia trees because they make the soil more fertile. We used our income to set up a municipal savings account for women to borrow and start their own business.

The Ecosia company - from profit to common good

On October 5, 2018 berichtete Among other things, BASIC thinking of the transformation of the search engine company from a GmbH to a Purpose AG (purpose = benefit). This means, among other things, that shares in the company may not be sold for a profit or given to external persons. Among other things, this ensures that no other company can buy Ecosia. In addition, it is not possible for the shareholders to be able to withdraw profits from the company. This ensures that the profit income is planted in trees and flows into the support of emerging local economies. 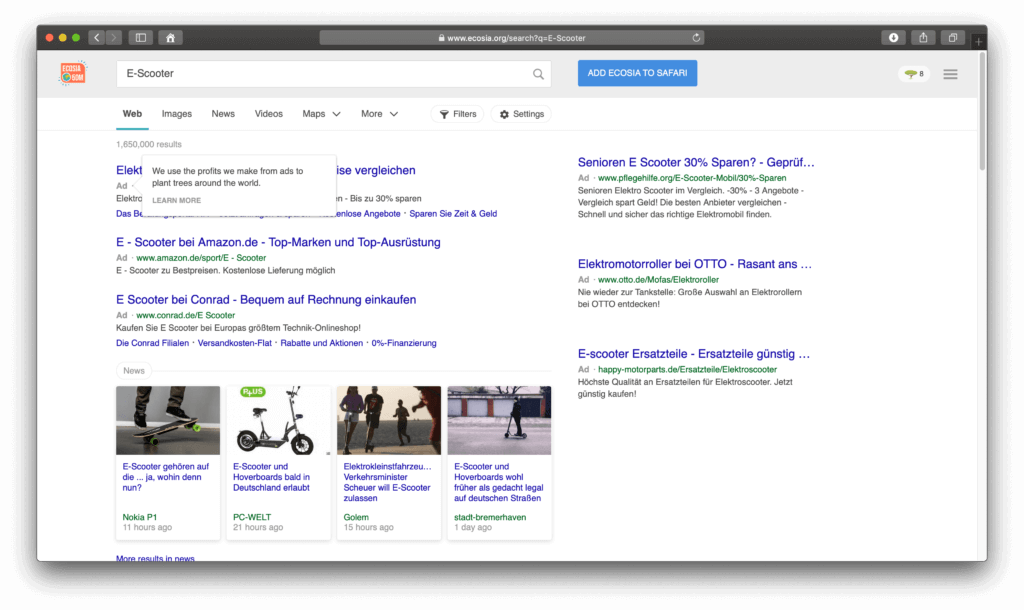 If you click on the advertising note, it is shown that the search aid is planting trees with the income.

Search at Ecosia and Google - a little comparison

Switching from one search engine to another is certainly unusual and therefore easy for very few users. After all, if you look for something online more often, you have already got used to the formulation of the correct terms and groups of words. In addition, many websites are adapted to the Google algorithm via SEO. In addition, many are probably still familiar with Microsoft's bing flop (not to mention current Negative headlines). However, after a little test, I think that Ecosia should definitely be given a chance. I haven't tried all possible search queries, but I think: the results are comparably good and much tidier than on Google.

By “tidier” I mean the visual presentation or listing of the results. Wherever there are three bold advertisements at the top and bottom of Google and news headlines, pictures and videos are embedded in between, Ecosia often has “clean” lists. Of course, advertising, pictures, videos and news are also displayed, but noticeably less intrusive. In addition, the headlines - in my mini-test - were more up-to-date. Messages from a few minutes ago instead of hours ago were displayed on the same topic. AND: ecological companies that pursue a green philosophy have a leaf symbol next to their search result. Here is a small, non-representative series of tests: 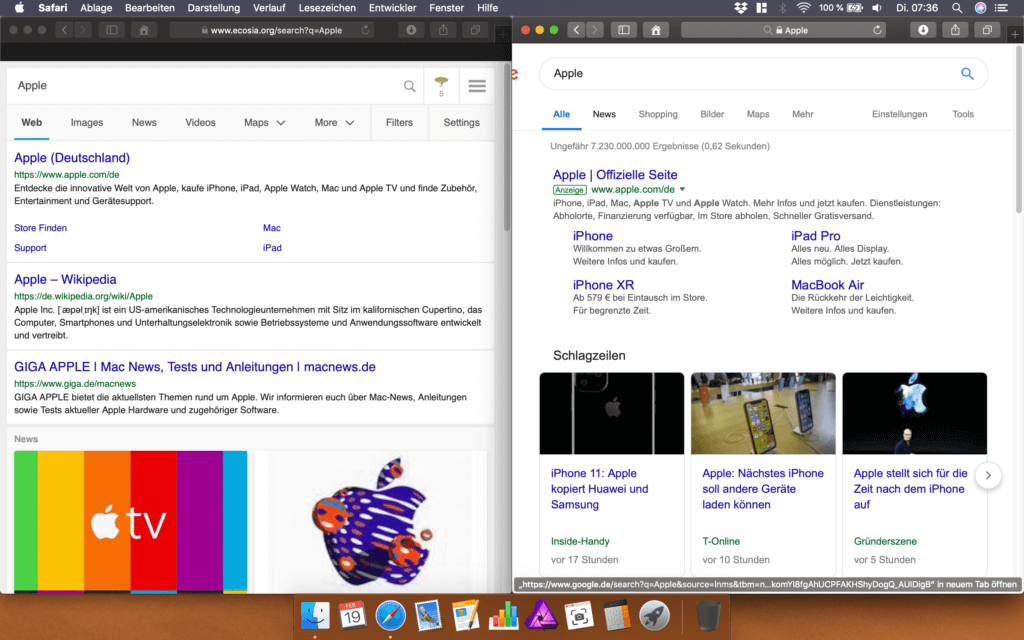 Ecosia delivers "clean" lists of results. At Google there is first of all advertising and news before the first real search result is displayed. 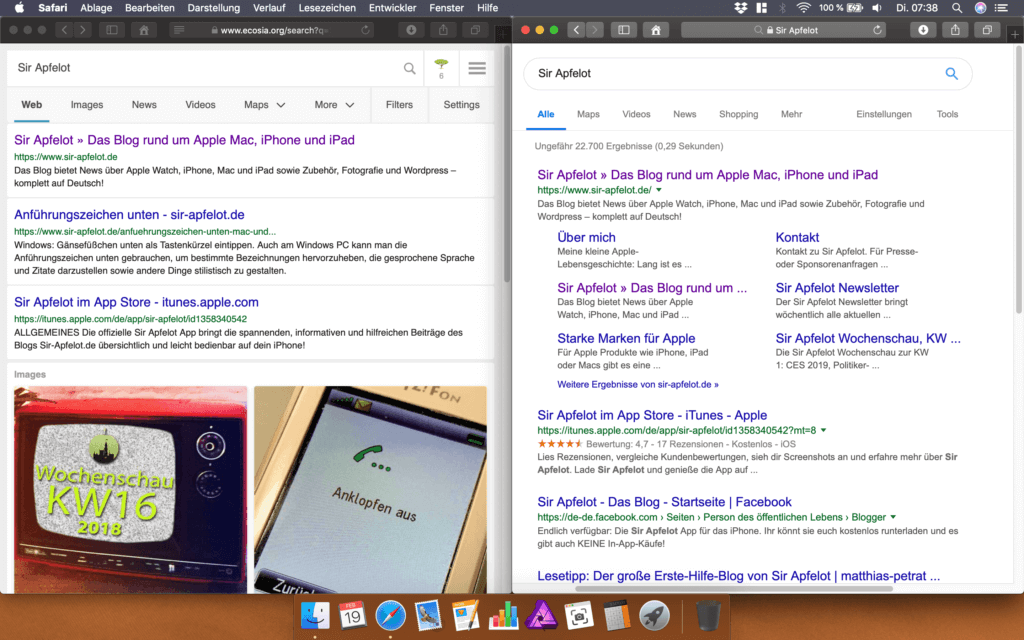 The search for Sir Apfelot goes comparably well, although the Ecosia image results are neither up-to-date nor necessary. 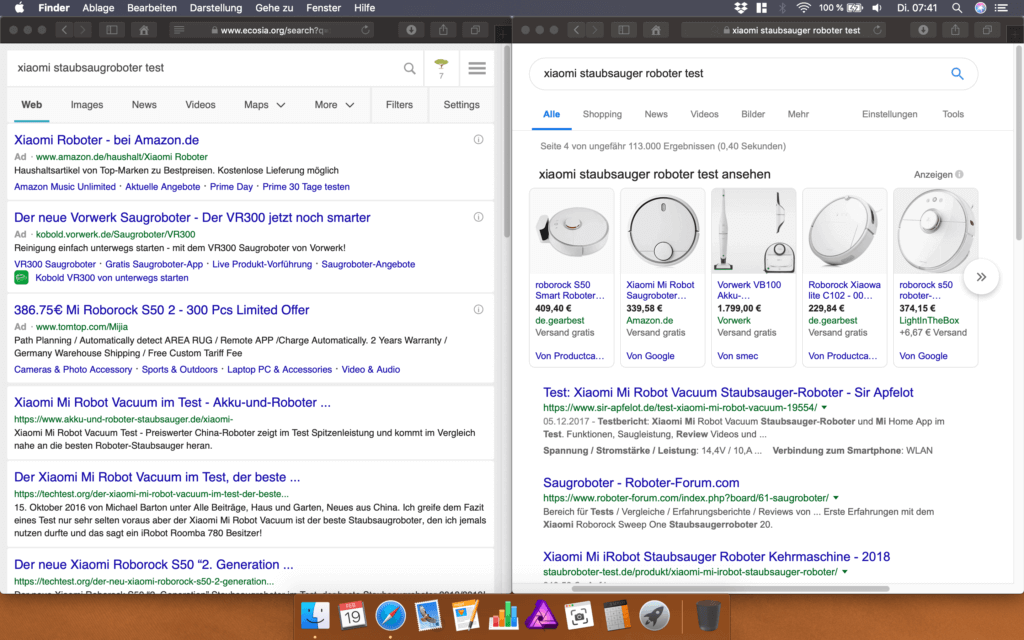 The Xiaomi vacuum robot test by Sir Apfelot is on page 1 at Ecosia, while advertising and shopping suggestions are displacing the article on page 4 at the Alphabet competition. 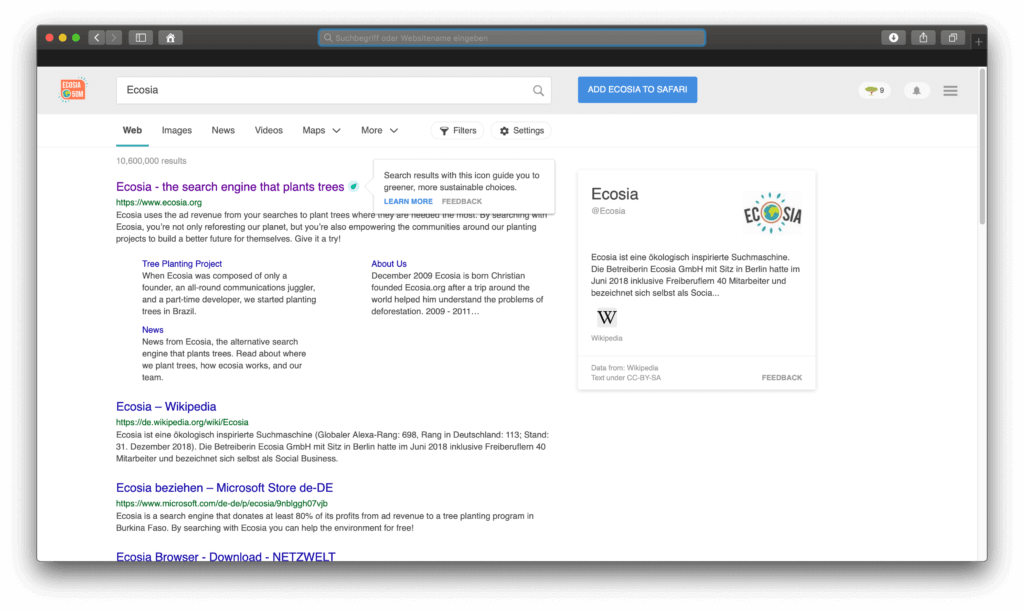 Green companies are rewarded with a leaf symbol.

Ecosia is a search engine that also advertises and earns money with its service, but not primarily for its own profit, as is the case with Google or Bing. Ecosia plants trees all over the world, helping small, emerging businesses in local economies. Over 50 million trees have already been planted in this way. A search of course does not lead to this success for ecology and climate protection; but several searches by many users ensure that euro for euro is enough money for the rainforest, usable areas and the like. More information is available at Home from Ecosia.