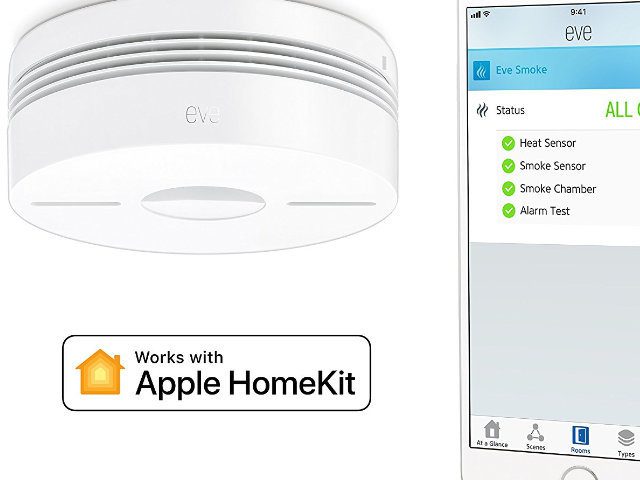 The HomeKit from Apple offers manufacturers and developers of systems for the Smart Home an interface to control devices and systems from Apple's central "Home" app. There is now that from Elgato Eve Smoke smoke alarm, which reports smoke and heat directly to the application and thus to your Apple device. From May 15, the dual warning device can also be ordered from Amazon in Germany. Below are a few technical data and details about the device.

Eve Smoke is not only a questionable, English-speaking imperative, but also the name of a smart smoke detector from Elgato that you can use with your Apple devices HomeKit can couple. According to the manufacturer, an Apple TV or iPad is sufficient to serve as a control center in an apartment or house. In addition, several Eve Smoke smoke and heat detectors can be networked, so that you are also informed if there is a fire / smoldering in another room, the garage, basement or storage room. The 10-year battery life and the independent function tests are intended to provide long-term security.

Elgato dual alarm device with HomeKit
The smart Eve Smoke smoke and heat detector from Elgato can be coupled with Apple devices so that smoke and fire warnings can be received as a message on the iPhone, iPad and Co. if there is a fire at home.
Buy it at Amazon Price includes VAT, plus shipping costs (updated: 12.08.2022 at 11: 49 clock)

More than just a smoke detector in the smart home

With the appropriate equipment for the facility, you can count on other functions of the Elgato Eve Smoke in an emergency. If, for example, you set up a so-called "scene" of interacting devices that activate the lamps on the escape route in the event of an alarm, you do not have to worry about finding the light switch in the event of an emergency or fire. You have to weigh up whether you want the windows to open automatically in the event of a smoke alarm. Because the spontaneous supply of oxygen could really ignite a smoldering fire. You can get advice and expert advice from the fire brigade.