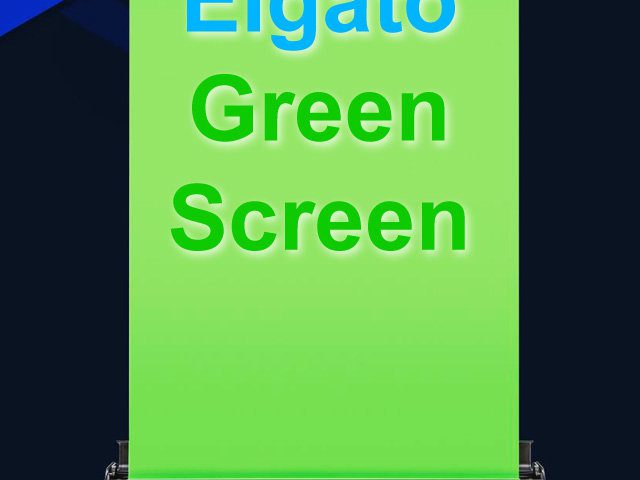 The day before yesterday Elgato presented new products for content producers and gamers, including the Elgato Cam Link USB stick, but also the Elgato Green Screen. The Elgato Green Screen, which I would like to introduce to you in this post, is a chroma key panel with pop-up technology presented as innovative. In other words: it is a green stand with which you can create a background even in the smallest room, which you can filter out in post-production or in the live stream and use digital content for it. Maybe not new, but space-saving and mobile;)

The Elgato Green Screen is a simple solution for anyone who wants to edit the video background from their video using the chroma key. Practical display with modern folding technology.

The packaging of the Elgato Green Screen is a protective cover or case, stand with feet and transport box in one. Inside is the individually extendable green screen, which should not crease when it is rolled up during packaging. This is to ensure a surface that is always straight and evenly illuminated, which can be ideally filtered out of the video or stream using the chroma key method and replaced with your own content or the main stream. The Elgato Green Screen is primarily intended for Let's Players who want to use a borderless Facecam.

Technical data of the operator

The maximum dimensions of the stand or the included and extendable green area are 180 cm in height and 148 cm in width. When folded, the stowage dimensions are 164,5 cm x 10,5 cm x 11,5 cm. The total weight is 9,3 kg. The scope of delivery includes the article itself and a quick start guide. The part is ideal for smaller people and for taking pictures while sitting. If you want to have more extensive green screens / blue screens for less money, I have listed a few alternatives (including lighting units, etc.) below;)

I already got you yesterday Elgato cam link Stick presented, which serves as an HDMI to USB 3.0 adapter and with which you can stream directly from the DSLR, digital camera, action cam, console and other sources to the Windows PC or Apple Mac with macOS. Of course, the manufacturer Elgato has not presented this product for free on the same day as the Elgato Green Screen and it is not for nothing that both will be delivered by Amazon from August 18, 2017. It should be a complete package for content producers who offer videos and / or live streams for their viewers on YouTube or on Twitch.

The manufacturer Elgato has also produced a small advertising video for the new mobile system, which makes it easier for you to remove and replace the background digitally:

Even more equipment from Elgato presented

Before the two products hit the market, I introduced you to a streaming device from Elgato, which you can use to easily use your PC, Mac, iMac or MacBook as a monitor for HDMI devices such as the Nintendo Switch, DVD Player or other video sources can use: the Elgato Game Capture HD60 S. In the article on this product you will find all the information you need as well as a tutorial for use with the Nintendo Switch. I also have a few words to say to you about that Elgato Stream Deck built-in. Although all of these products are in the high-price segment, they play together so well that streams and productions with serious intentions for success can benefit from them.

Whether for gaming, the production of a web show, filming sketches or for completely different applications - you can pre-order the new product from the professional outfitter and buy it for delivery later this month. However, if you don't shy away from a few more efforts when setting up and putting it together or generally have the space to simply leave the green background, then there are much cheaper alternatives for you on Amazon: