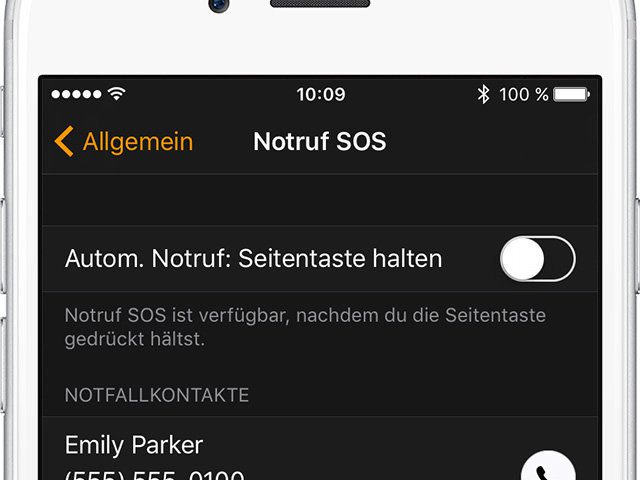 With the smartwatch operating system watchOS 3 from Apple, some emergency and security updates have already been made to the Apple Watch - with iOS 11, corresponding features will also be extended to the iPhone. Making SOS calls, making an emergency call or calling up the iPhone owner's medical data is even easier with iOS 11. Here is an overview for everyone who always wants to be safe on the move.

Emergency call and SOS functions have been available for iPhone and Apple Watch for some time. These will be expanded under iOS 11.

SOS function of iPhone and Apple Watch under watchOS 3

Even in connection with an iPhone using iOS 10, the Apple Watch can be used efficiently for emergency calls and emergency information. Among other things, there are the options to inform relatives and emergency services, to share your own current location, and other useful features for emergencies. On the Apple Watch, the emergency call is made via the switch-off menu, which appears when you press the side button of the smartwatch for a few seconds. In addition to using the watch, you can also set an emergency call to be made automatically from the iPhone after a few seconds.

Excerpt from the explanations and instructions on the official support site.

Since iOS 8 there has been the option of storing medical data in the health app that rescue workers and doctors can use to help in an emergency. With information such as blood group, weight and the like, decisions are made faster and measures are applied more efficiently. The emergency pass will also be available under iOS 10 and in the upcoming iOS 11. With the Apple Watch under watchOS 3 and the upcoming watchOS 4, the emergency pass can also be accessed via the smartwatch.

You can store individual information by entering the Health app calls, there the Emergency pass selects and then on Edit is typing. To add information, emergency contacts and the like, press the green circles with the plus. Have you filled out everything, then you tap on the top right Ready. You can find more information about the SOS on the Apple Watch at Apple Support.

Soon on the market: Current rumors about the iPhone 8

Under iOS 11, new features are to be added for the well-known functions. In the Settings you can find the sub-item Emergency SOS. There is also a hint that you have to press the side button of the iPhone (sleep-wake button) five times quickly in order to send an emergency call. There is also the option of sending an automatic call or making a “regular” emergency call. In addition to the health app, you can now also add emergency contacts directly in the settings. John Cipriani contributes CNET.com to the new side button feature:

“A possible disadvantage of activating automatic calls is the accidental triggering of the SOS function. All it takes is quickly pressing the Sleep / Wake button five times to initiate an emergency call, and there is no guarantee that it won't happen in your pocket or purse. I recommend leaving the countdown sound option activated [...] to give you the chance to cancel the call. "

The option of the countdown tone gives you a signal for three seconds that actively ensures that you can take it back if you accidentally trigger an emergency call. Alternatively, you can also deactivate the automatic triggering of emergency calls - then after pressing the iPhone side button five times you have to pull a slider on the screen to the side to place the SOS call.

iOS 11 officially soon: Date and information about the September Keynote 2017

SOS button has been mandatory in India since 2017

The emergency and SOS solutions from Apple and other smartphone and smartwatch manufacturers are generally a great gesture for more and faster help. However, in some countries they are simply unavoidable if you want to stay on the market as a provider of mobile devices. For example, the SOS button has been mandatory on new devices in India since 2017 - it is primarily intended to help women who are not infrequently the victims of attacks. Whether a special button with a single function or an SOS function for multi-function buttons like Apple's, that's up to the manufacturers. Already in April 2016 reported the mirror on the subject.