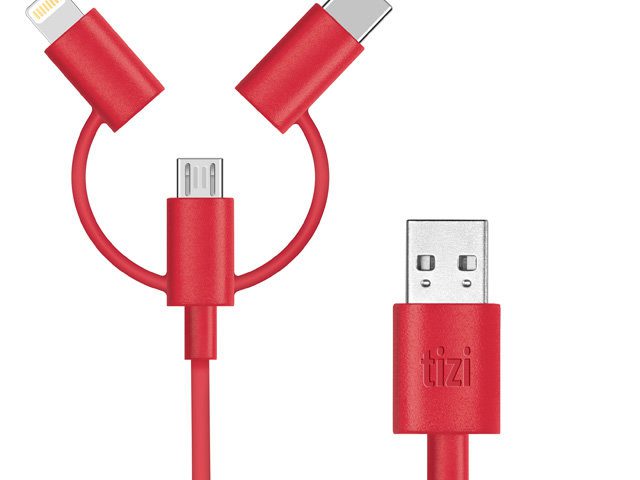 The new Equinux tizi rascal is a data and charging cable for mobile devices with universal connections. On one side there is a USB-A connection, on the other side and permanently installed one with micro-USB. Two flexible adapter plugs are attached to the latter so that the cable can also be used with USB-C devices or Apple products including a Lightning connector. This makes the 1m long Equinux tizi rascal, which you can order in red or black, ideal for travel, for the office and also against tangled cables at home;)

Equinux tizi rascal: 3 in 1 cable for all devices

As a practical 3-in-1 cable for pretty much all mobile devices, the Equinux tizi rascal could also have been called “jack-of-all-trades”. With the micro-USB and USB-C connection, it can be used with many smartphone and tablet models Bluetooth speakers, Action cameras, e-book readers, with rechargeable flashlights or electric lighters as well as much more. In addition to charging the respective battery, it is also possible to exchange data via the cable. The Lightning connector from Apple is designed for use with the Apple iPhone, iPad and iPod Touch MFi-certified, officially "Made for iPhone, iPad and iPod".

Three connections ensure complete compatibility with Android and iOS devices as well as with other mobile gadgets. The cable is also MFi certified.

Buy cables in black and red

You can buy the Equinux tizi rascal in red and black. According to the manufacturer, it can be used for fast charging on the iPhone with iOS as well as on Android devices and for other types of mobile gadgets. The high-speed charging is supported by the so-called "tizi Power Lanes" (high-end copper braid with 20 individual wires) realized. In addition, the makers from Munich say that this product is the "perfect lifehack cable for frequent travelers".

Equinux 3in1 Lifehack Cable in Red
Equinux tizi rascal in red color, CE-compliant and one meter long. The combined universal cable with USB-C, Apple Lightning, Micro-USB connection options is not only practical for travel and vacation, but also at home.
Buy it at Amazon Price includes VAT, plus shipping costs (updated: 17.10.2022 at 21: 46 clock)

Equinux 3in1 Lifehack Cable in Black
The rascal from the tizi family by Equinux from Munich is also convincing in black. On the product page you can find other cables like the tizi Flip and the tizi Schlingel. The reviews on the site are just as varied, but the respective product is included.
Buy it at Amazon Price includes VAT, plus shipping costs (updated: 16.09.2022 at 11: 26 clock)