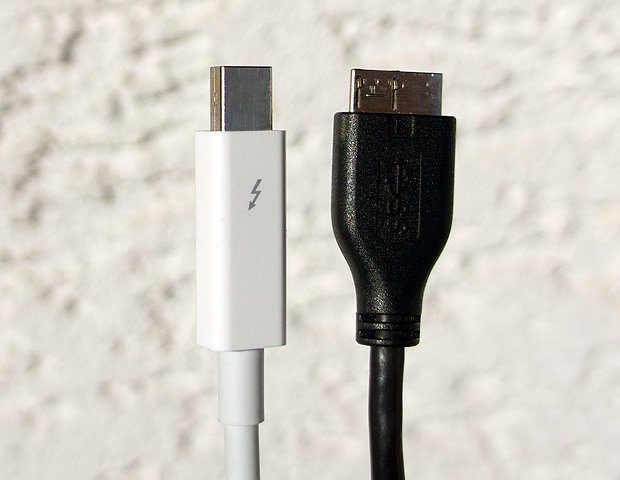 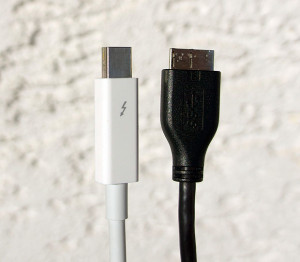 USB 3 or Thunderbolt - that is the question (Photo: Sir Apfelot).

External hard drives are often bought to store files, to back up the iPhone or iMovie library or to be used as a TimeMachine volume. With current Macs, the question arises whether you should buy a USB-3 or a Thunderbolt hard drive. In this article, I would like to briefly explain the advantages and disadvantages of the individual interfaces in relation to use with hard drives on the Mac.

In my opinion, the most powerful argument in favor of an external hard drive with [USB-3 connection-> usb-3] is simply the price. As a user you naturally want to get as much storage space as possible for as little money as possible and in this respect you are well served with an external USB 3 hard drive. The small 2,5 inch hard drives with 1 TB capacity are available for less than 70 EUR and the USB cable is already included. If you want to get something comparable to a Thunderbold hard drive, you have to spend about three times as much (including the [Thunderbolt cable-> thunderbolt cable]).

Another advantage for USB 3 is the fact that the USB 3 cable can be up to 5 meters long, while with [Thunderbolt-> thunderbolt] "only" 2 meters long cables should be connected. The data throughput for USB 3 is specified as 4,8 GBit / s, which in practice results in speeds of 50-100 MB / s depending on the type of files that are read and the hard drive model. If you are not in an extreme hurry, you can definitely get by with a USB-3 hard drive. As a backup medium in particular, these disks are the best choice when you consider the price-performance ratio.

Advantages of the Thunderbolt hard drives

Hard disks with a Thunderbolt connection clearly score points in terms of speed. This is understandable because the Thunderbolt 1 interface can transmit up to 10 GBits / s in full duplex mode. This is twice the USB-3 speed. In practice, however, things look different, because the limiting factor with an external hard drive is no longer the interface, but the built-in hard drive, which simply slows down the data transfer due to the access times of the mechanical read heads. If you really want to use the full power of Thunderbolt with an external hard drive, you must inevitably switch to an external SSD with Thunderbolt, because this can then also use the bandwidth of Thunderbolt in practice.

Conclusion: USB 3 is currently ahead

If you don't have a special case and are dependent on the Thunderbolt connection, I currently don't see any practical advantage that you would have with a [Thunderbolt hard disk-thunderbolt hard disk] over a USB-3 hard disk. If the [SSD hard disks-> ssd hard disk] can compete with the rotating hard disks in terms of capacity and price, things will look different again, because then they are about twice as fast in data transfer - a point that would certainly justify a small surcharge for some users. But until then it will certainly be a few more months.