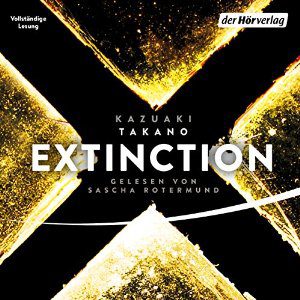 The audio book EXTINCTION is a successful mixture of reality with a touch of science fiction (Photo: Audible).

When you hear "science fiction" you often think of spaceships, lightsabers and the like. But the audio book I've been listening to for the past few weeks has nothing to do with any of this. There is not even a proper alien in it. But it's science fiction anyway, because the focus of the story of "EXTINCTION" is a little boy who has an exceptionally high level of intelligence and is therefore seen as a threat by the US government. Doesn't that sound exciting? But it is!

I have to admit that when I read the "blurb" I was only partially convinced. Here is the extract for you:

Jonathan Yeager is sent to the Congo on behalf of the American government. In a tribe of pygmies be a deadly one Virus broken out The spread must be prevented by all means. But in the jungle, Yeager realizes that something else is at stake: a young boy with incredible skills and superhuman intelligence is the real target of the operation. Could it be that this creature threatens the future of mankind? Yeager refuses to kill the child. He does everything to bring the boy to safety. A merciless hunt for the two begins.

Sounds so "medium-exciting" from my point of view. But I got it anyway and thought I'd let myself be surprised. And that also worked.

The story contains an unbelievable number of topics that the author has mastered with a masterly hand Kazuaki Takano (here at Wiki) were interwoven. Here is a small list of what the listener can expect:

Too many highlights for one story? Not if they are well connected with each other - and that is exactly where the author seems to be a real specialist. The story starts with several threads that all come together at some point. And the scientific details with which the experiences and deeds of the actors are peppered do not seem "made up" but are probably for the most part true.

This mixing of the true facts with the invented details of the story make the audio book an extremely exciting listening experience that is certainly not only suitable for people who are enthusiastic about technology and science. But especially these will have a lot of fun with the story.

The animal "human" at the center of the story

The focus of the story is actually people and how they must affect a living being that has overtaken them many times over in terms of intelligence. Why are there such cruel things as the genocide in Rwanda? Why does a person see members of other human races as a threat? These questions are explained "incidentally" in the story and the actions of the actors become more understandable and comprehensible through these explanations. And as a member of the "human" species you get the feeling more than once that you belong to a somewhat short-sighted and brutal "animal species".

I don't want to reveal any more, because I feel like I'm revealing too much about the story. But I can promise this much: The 19,5 hours that the audio book is running are anything but boring - from my point of view and from the point of view of most of the reviews. Nevertheless, I would like to briefly present you with an excerpt from an evaluation that might show what the reader might find annoying about the book - namely the scientific details that I find particularly interesting (even without studying biochemistry):

I'm not sure what to think of Kazuaki Takano's writing skills. I'm trying to understand what made him want to squeeze so much scientific input into his book. Didn't anyone tell him that a thriller must above all be exciting and shouldn't require a degree in biochemistry?

(Excerpt from this review on Amazon)

As I said: I really like these small details and I think they are an essential aspect of why the story seems so "realistic". Some quotes from the press also show that I'm not so wrong:

If you want to take a look at it or get it from Audible as part of the trial month, you can do so here: