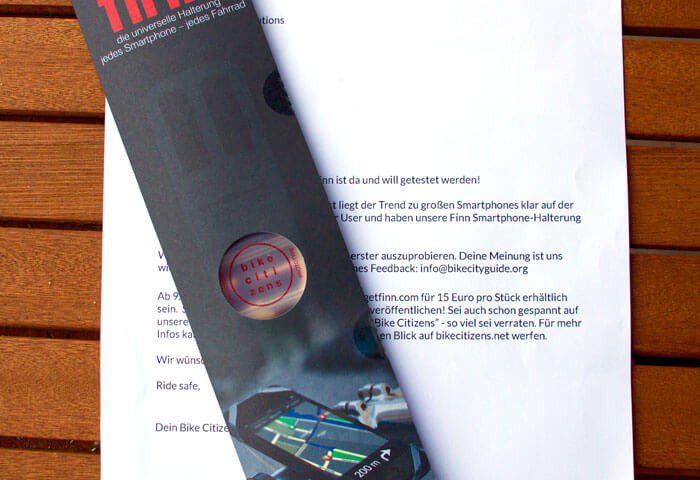 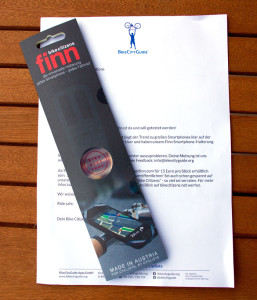 The cover letter with the request to put the FINN through its paces.

A few weeks ago I got mail from the Bike Citizens. In the envelope, a cover letter stating that the new FINN in the design from the beginning of 2015 will soon be available and the request that I should test it out. I suppose the guys did my post about the "old FINN" in the blog discovered and thought that I would be a good tester. I will of course be happy to comply with your request. The cover letter also included two new FINNs that I should torture to my heart's content. The words literally read "Go ahead, try to break me." Well, I'll take part! :-)

What is the "FINN" anyway?

To make it short, I just quote the product packaging: The FINN is "the universal holder" for "every smartphone - every bike". Even the large smartphone models such as the iPhone 6 plus or the Samsung Galaxy 6 and the thick handlebars of some mountain bikes should not set any limits to the FINN. I have already read in customer reviews that some use the FINN to attach the iPhone to the motorcycle handlebar. Because of the stability, I wouldn't worry about that either. Here in the video from the Austrian manufacturer you can see the assembly and function of the FINN in detail:

The pull test: can you tear the FINN apart?

Since there were two FINNs in the package, I decided to take a FINN to see how much it can withstand "on the move". To do this, I didn't mount it, but hooked the fingers of each hand into one end of the FINN and then pulled it vigorously. It let itself be drawn for a long time, but it is not torn. Now you don't have to believe that I pulled carefully. I think I have at least built up the tension that you get when you clamp the FINN with a smartphone. But nothing happened - so far so good. 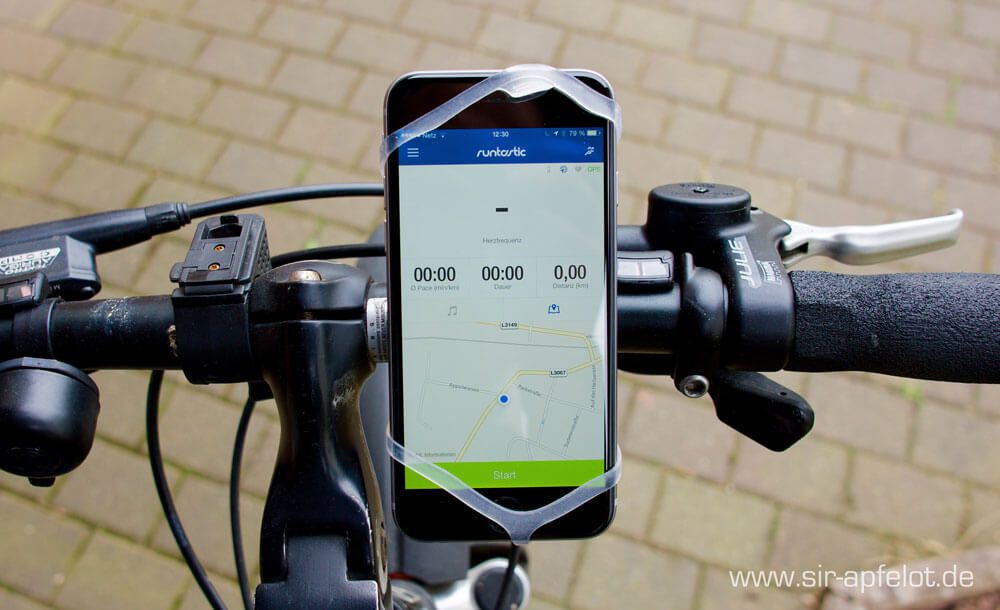 This is what it looks like when the FINN bike mount is mounted on the handlebar. If you take a little more time, you can get the silicone straps completely out of the display. But that wasn't so important to me ... (Photos: JK).

Mounting on the bicycle handlebar

To use the FINN, you practically wrap it around the handlebars once. Then you put a small tab through a slot on the other side of the holder and then clamp the smartphone with the corners in the openings of the silicone tabs. The advantage of this method is that you don't need a new mobile phone holder on the handlebar for every new iPhone model. No matter if iPhone 4, iPhone 6 or even iPhone 6 Plus: The Finn holds everything bombproof on the handlebars. The old model was still a little less flexible and was not designed for the large smartphones. The redesigned Finn, on the other hand, could even work with the iPad mini if ​​you want to take it to the extreme. 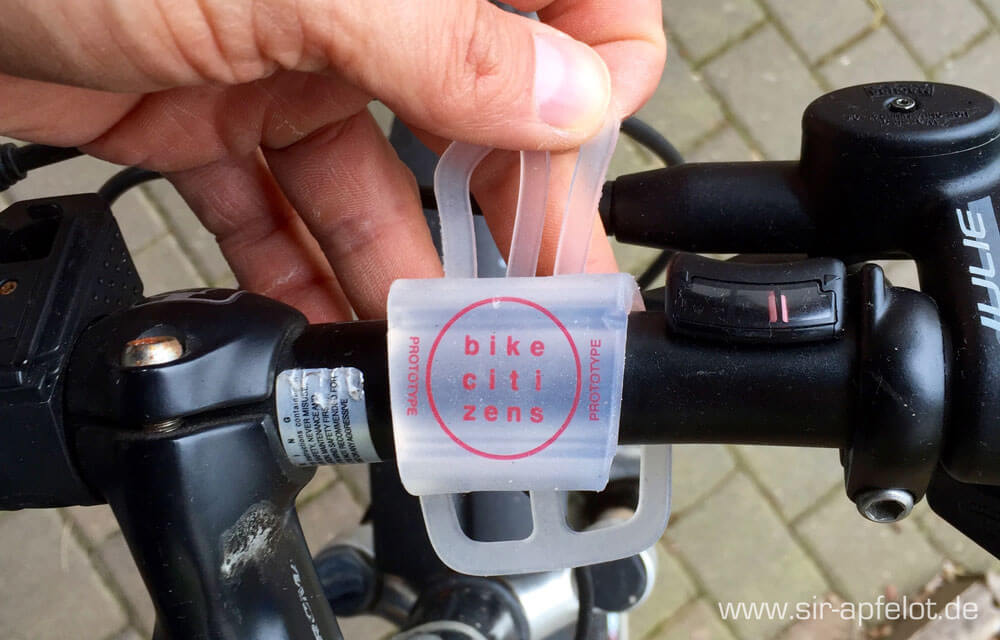 You can recognize the 2015 version of the FINN by the small fluted flap that I cover with my thumb. In my opinion, the contact area has also increased compared to the old FINN.

Another improvement is the "padding" that is now under the smartphone. In the middle, the FINN has become significantly thicker and, thanks to its construction, offers an almost flat surface for the smartphone. It vibrates significantly less and you can read the display better even on bumpy roads. I once took a photo of you from behind so that you can see the contact surface better (red circle).

The attachment of the smartphone to the FINN has been improved, as the support for the mobile phone has become thicker and larger.

Conclusion: Although the old FINN was already top ... the new Finn top it!

The makers of the FINN have definitely not rested on the success of the old model and thought about improvements. I assume that the silicone is also better now, because the old model occasionally tore the holder - especially when you tried to clamp a large smartphone. After a few weeks, I can't say anything about the durability in the long term, but I assume that the manufacturer of the holding rating also had this aspect in mind, because, as far as I know, previous complaints about tearing were always uncomplicated with a new FINN made the world.

With the new FINN, the construction has been improved in details and so I think an upgrade to the new Finn is very useful. Especially when you are out and about with an iPhone 6 plus. Incidentally, the FINN also offers enough flexibility to leave the cell phone case on my smartphone, I like to have the protection on my iPhone at all times and I wouldn't have to take it off for a bike ride. The home button is also still easy to use. Even TouchID is not a problem if you push the lower silicone band down a little.

In my opinion, a great smartphone holder at a good price! Well done! :)

I want to buy the FINN with the new design! Where does that go?!?

If you want to buy the FINN, you can either do so via the manufacturer's homepage at getfinn.com or via Amazon. But when buying, make sure that you get the new design. There are still quite a few old models in shops. The new model has a small flap with ribs on the upper end. You can quickly see whether it is the new or old model. I've linked the new one here:

Another note: For every FINN there is a code for downloading a city package from Bike Citizens app (until recently it was still called BikeCityGuide) worth 4,49 euros. the App offers bicycle navigation in several cities in Germany. Please check before you buy whether the offer is still correct. It may be that this will change.