In China, the first smartphone lane has now been set up on the sidewalk 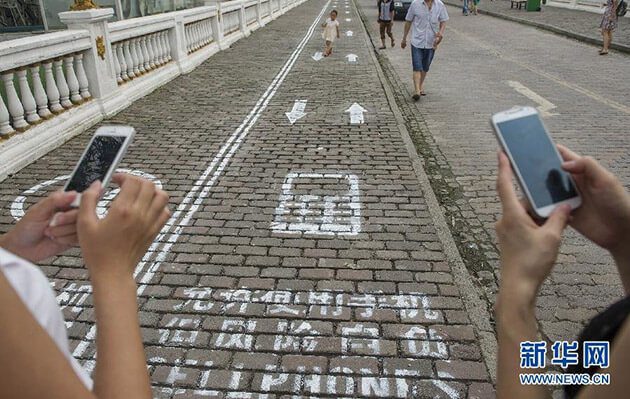 Sometimes you wonder if it's April first and you haven't noticed. The weather already looks like April, but the calendar says something different. All the more astonishing are reports like this one that I have at Engadget discovered:

"In this Chinese city, cell phone addicts get their own walking streak"

Engadget is referring to a message from a Chinese publication.

Here you can see the marked sidewalk with the cell phone lane for smartphone addicts (Photo: News.cn).

And indeed: After the first tests, it became apparent that there is definitely a need for such a sidewalk with a cell phone lane, because the smartphone users seem to be mentally completely occupied with their device, so that they no longer notice anything while walking happened around them. The scientific proof of this can be found .. The problem is also addressed in this English video:

There was already another Testwhich was carried out in Washington. A middle dividing line was inserted on the pedestrian walkway and a strip was labeled "No Cellphones" while the other side was labeled "Cellphones walk this way at your own risk". The aim was to try to see if people would use the opportunity to walk on this special strip. The trend will probably go in this direction ... although I would also find another variant funny:

Cell phone users on the street should be locked up ...

I find the result of the not entirely serious survey below the article on Yahoo astonishing. They asked if people who use their gadgets while walking should be given their own lane on the sidewalk. The possible answers: "Yes", "No" or "They should all be locked up!" The results:

If you are interested in the sum of the percentages, be assured that I will get them 1: 1 from the survey have taken over!

So, enough of the entertainment. I have to run to the bakery again and write 5 emails. ;)