It's slowly getting really autumn; outside it's getting colder, grayer and windier. You want to wrap yourself up in a blanket on the couch at home or lie in the hot tub all the more often. And what could be nicer than a couple of candles, nicely draped and burning with flickering, warm white light? That's right, LED tea lights with timer function for flameless relaxation;) You can easily get in on Amazon Pack of 12 LED candles with automatic switch-off function buy, in warm white or yellow. So that you can get through the winter, you will find with this link also the right batteries!

Flameless LED tea lights with timer function for autumn and winter: Nice and cozy and decorative for home, office, shop and more!

You can buy the electric tea lights with timer offered by the PChero brand as "LED candles with timer function" in either warm white or yellow. For 14,99 euros instead of the regular 29,99 euros, the package with 12 pieces is definitely a bargain. The flameless candles with time switches light up for 6 hours after being switched on and then go out for 18 hours. So you can simply place them without programming, without an app or other smart home gadgets and then have them approached for the daily evening - even with a time delay if you switch them on one after the other! 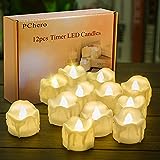 LED candles with timer function
These LED tea lights with timer light up for 6 hours and are then automatically switched off for 18 hours. According to the manufacturer, a 3V lithium CR2032 battery lasts for about 10 days. In addition to the home, for the evening and the weekend, you can also use the LED lights with timer for the party, for a cozy concert or Halloween!
14,99 EUR −1,00 EUR 13,99 EUR
Buy it at Amazon Price includes VAT, plus shipping costs (updated: 12.05.2022 at 16: 30 clock)

Here I have summarized the most important technical data and other details of the LED tea lights with timer:

And here I picked out a few more votes from the customer reviews, of which 72% fall to 5-star and 14% to 4-star ratings:

I was tired of exchanging real tea lights twice a day. Now I just switch it on and it burns for 2 hours and then it switches itself off again and on again after 6 hours. Ideal for me. When I come home it's already dark outside in winter. Then they light up and when I go to bed I don't have to worry about anything, they go out. [...] But they are nice and bright, so that they also come into their own in colorful decorated glasses. I think it's great and have already reordered it several times.

These LED candles are a little bit taller than a normal tea light, but have almost the same diameter. The light is very nice and the "candles" also look very good - not as artificial as they actually are. Price is great for 12 pieces and the timer function is very practical [...]

The candles are super nice, give a deceptively real impression and the timer works reliably. So I have great candlelight all over the house, without much effort. I don't want normal candles anymore.

CR2032 batteries for the LED candles with timer and wax effect

In addition to the timer, which automatically switches the LED candles on and off with a timer, they have a beautiful wax effect. The candles, which measure 4 cm in diameter including the wax tears, are white, but slightly translucent so that they appear yellow-orange when the lights are on. CR2032 batteries, so-called button cells, are required for operation. If you leave the candles on permanently to extensively test the timer function, a button cell will last for 10 cycles, i.e. 10 days. A correspondingly large pack of batteries for the LED tea lights with timer is also available from Amazon - so you can order it as a bundle;) 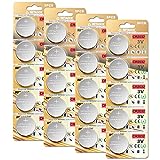