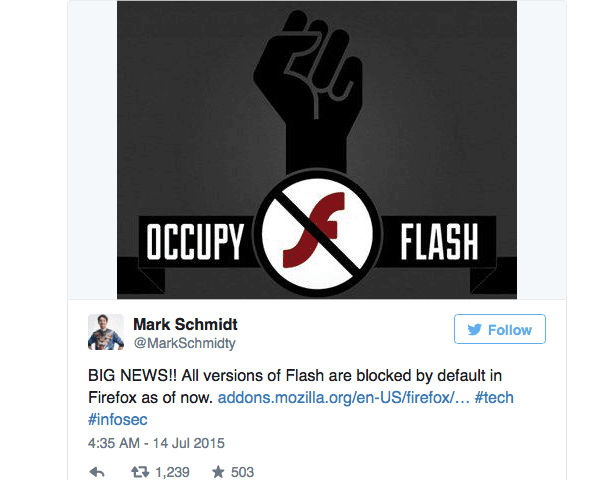 I am already Has been an active Flash refuser for a long time, because on the one hand the performance and on the other hand the Vulnerabilities take tremendous nerves. To be honest, I only noticed the missing Flash plug-in for the videos on Facebook, which in most cases no longer ran, and for advertising banners from Amazon and Co. that were completely based on Shockwave Flash and were therefore no longer displayed. Really relevant content of websites is usually not implemented with Flash anyway and if someone still thinks that they should program their entire website in Flash, they are welcome to go to SEO advice with me arrive. ;-)

But to the point: The reason I actually dedicate another blog post to Flash (and I guess it was the last one!) Is the fact that the Exposure of the last serious security problems of the Adobe plugin have ensured that a few big players on the Internet have called themselves to interesting acts.

So got loud Engadget Mozilla has set up a blockade of all Flash content through their [Browser Firefox-> firefox] (in the new versions) and Facebook promised that Flash would no longer be supported internally. Mark Schmidt from Mozilla admitted that Flash would be allowed again if Adobe managed to make the system secure, but, as always, this should only work for a short time. Hardly two weeks go by in which the newspapers do not report serious security flaws in the plugin. 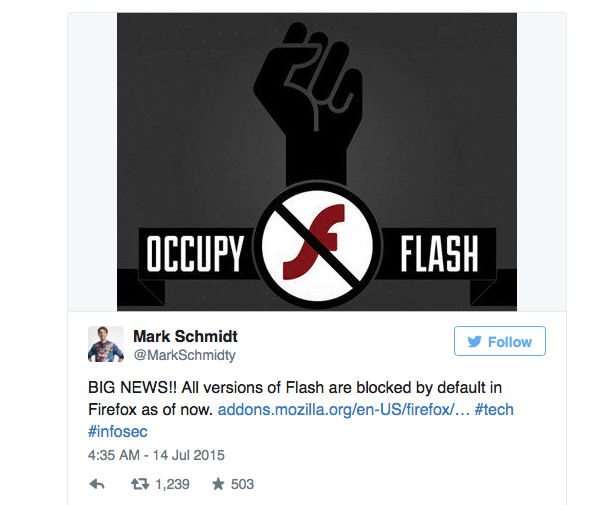 Here Mark Schmidt announces on his Twitter accountthat Firefox will block Flash in the near future.

But a consolation for all fans of Flash: There will be an option in Firefox to reactivate Flash. So if you really want to open a system to hackers and Trojans, you can "activate" it again with a tick. In my opinion, this option could have been left out.

Occupy Flash - Get rid of the outdated stuff

While researching this article I also went to the website occupyflash.org bumped. There you will find a contact point if you want to actively participate in the fight against Flash. I think the manifesto from the "association" is really good:

The Flash Player is dead. His time is up. He's flawed. He often crashes. He needs constant security updates. It doesn't work on most mobile devices. It's a fossil left over from the era of closed standards and one-sided company controls over web technologies. (...)

And the mission is also very honorable:

Our goal: The world should uninstall the "Flash Player" extension from its desktop browser.

According to the website, I've made the world a little better again:

Yippieh! I did everything right! :)

With this in mind, I wish you a happy deinstallation and keep my fingers crossed that you stand firm and leave your browser "clean".