Apple patents: foldable iPhone 8 that can also be located when switched off? 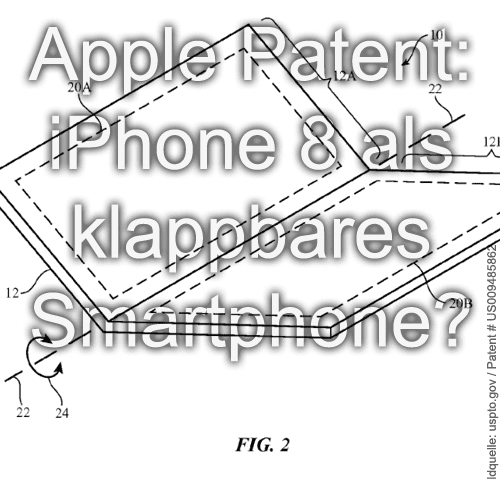 Hardly were in September of this year the iPhone 7 and the iPhone 7 Plus presented, it is already hailing IPhone 8 rumors - for example that it foldable should be. So we become the Keynote 2017 get a foldable iPhone? Can the SE version then be unfolded to the iPad mini and the Plus version of the iPhone to the iPad Pro? All of this no longer seems impossible. In addition, switched off Apple smartphones should now also be able to be located.

Foldable iPhone for the next 2 years

The idea of ​​the foldable iPhone is not new and is apparently at least already being used at Apple since 2013 worked out. Furthermore reported patentlyapple.com already in January 2014 of US patent applications and sketches showing a foldable smartphone. At that time it looked like the smartphone should be folded in half - similar to a Game Advanced SP. To stick with the Nintendo comparisons: the new patents tend to suggest a look à la Nintendo DS, i.e. an opening and closing on the long side.

The new Apple patent shows foldable devices as well as details about circuits, the power supply and other technical insights that promise innovation.
Image source: pdfpiw.uspto.gov

With the foldable Apple iPhone, it may well be that two displays are used. A large display with a flexible middle section is also conceivable. That would Adoption of Forbes magazine support that a 4,7 inch iPhone can be unfolded into a small iPad and accordingly a 5,5 inch device can be made into a large iPad.

Only when it comes to publication does Forbes curb the euphoria. For 2017 there are models with for the time being OLED display planned. There would then be more curved OLED cell phones in 2018. The fold-out iPhones will not be available until 2019. If no S version intervenes, those would be the models of the iPhone 10. (Although there are also rumors that the iPhone will be given number 2017 as early as 10 - due to its round birthday ...)

The new patent with the number US009485862, which was awarded to Apple on November 1, 2016, now describes the apparently foldable iPhone. The patent also shows how the circuits and chips are supposed to withstand opening and closing. Figure 16 shows how a fold and thus breakage can be prevented. Carbon nanotubes and printed circuits are also mentioned. ( )

Bending without breaking is shown in Figure 16 of the new Apple patent.
Image source: pdfpiw.uspto.gov

New patent for locating a switched off iPhone

The patent with the number US20160323703 describes another innovative point in iPhone development. The descriptions and drawings on the paper deal, among other things, with the allocation of storage units and various power supplies. An iPhone that is switched off or one with an apparently empty battery should have an always active or periodically activated GPS module. The use of other location options (cellular network, etc.) is also considered. ( )

Another Apple patent shows that the distribution and control of resources (memory, power supply) in the new iPhone is to be overtaken - one of the goals: to enable the location of devices that are switched off.
Image source: pdfpiw.uspto.gov

Conclusion on the subject of iPhone 8 or iPhone 10

Maybe Apple makes it dependent on the level of research and development, like the iPhone, which is on the Keynote will be presented in 2017. If it comes with a static OLED display for the time being, it will probably be an iPhone 8. If you can fold it up, it could be called iPhone 10 according to the birthday. At least that's what you can tell from the rumor mill that's currently simmering. I'm definitely curious and keep an eye out for new patents.